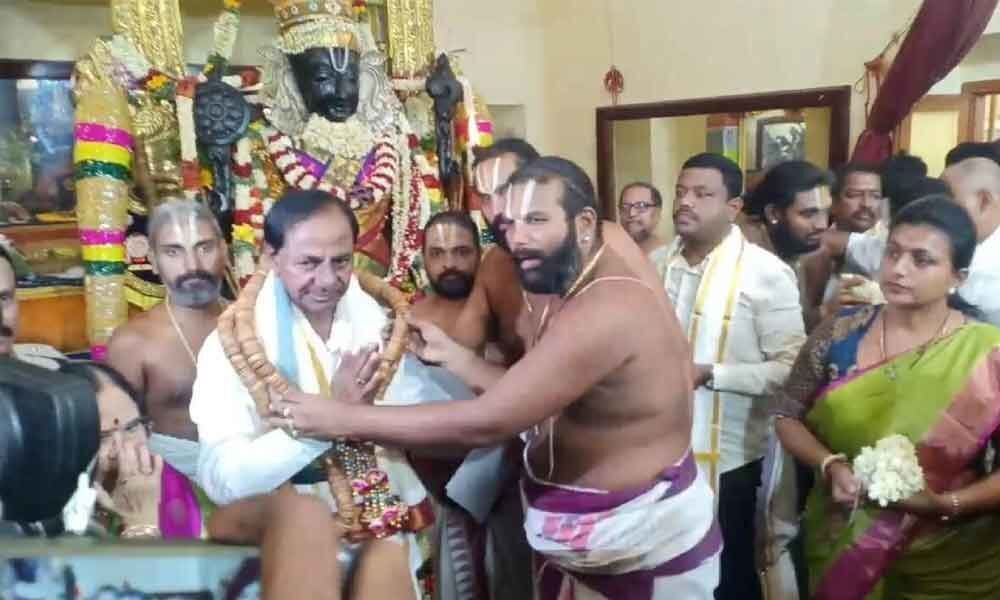 Telangana Chief Minister K Chandrashekar Rao on Monday visited the temple of Athi Varadaraja Swamy in Kanchipuram along with family and offered prayers.

District Collector P Ponnaiah received KCR at the temple. Temple priests presented him with a garland and took him for darshan with temple honours.

KCR and family members were received by YSRCP ministers and leaders, including Nagari MLA Roja who accompanied the chief minister to Kancheepuram. In his return journey, KCR went to Roja's house.

Later talking to media, the Telangana CM said that he, along with Andhra Pradesh Chief Minister YS Jagan Mohan Reddy, were scripting a new chapter in the lives of Telugu people.

"Our relationship may not be digestible to some, might be disagreeable to some. There is nothing we can do about this, but we are determined, with the blessings of the Lord and the people, to do our best to turn Rayalaseema into a 'Ratnalaseema (land of diamonds)," he said.

Chandrashekar Rao said: "Andhra Pradesh has a Chief Minister with a determination to deliver. He understands the problems of the people of Rayalaseema. Godavari water has to come to Rayalaseema. As an elder brother, I assure 100 per cent cooperation.

This will be possible." He also mentioned that he and Jagan Mohan Reddy have been discussing ways to get Godavari water to Andhra Pradesh. "A thousand tmc ft of water goes waste into the sea from Krishna and Godavari rivers.

Instead of allowing it to go waste, we came to a positive decision on using the water," he said. Turning to YSRCP MLA Roja, who received him at Kadiri on the way to Kanchipuram, KCR said, "Roja is like a daughter.

I bless her." He said that his family had a very good darshan of Sri Athi Varadar Swamy.