Non-BJP opposition parties unlikely to meet on May 21 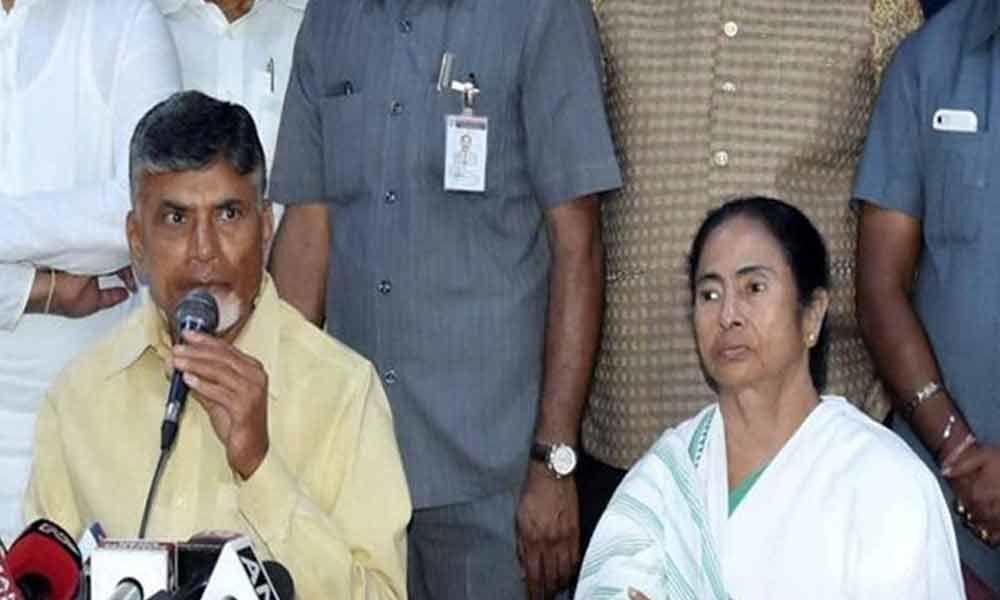 Amaravati: The non-BJP opposition parties are unlikely to meet on May 21 as Trinamool chief Mamata Banerjee has requested TDP president N Chandrababu Naidu to fix a date after the declaration of results on May 23 for it, at the convenience of other parties.

"Our leader is yet to take a call on this. It depends on the outcome of the elections. The meeting, though, is bound to happen after the 23rd," a member of the TDP politburo said here Monday.

During their meeting on Thursday last, the AP Chief Minister reportedly suggested to his West Bengal counterpart that a meeting of the non-BJP opposition parties be convened on May 21 to discuss the post-poll strategy.

She, however, expressed reservations over this, citing the impending counting of votes on May 23.

TDP sources here aver that Mamata Banerjee expressed apprehensions over the safety of the EVMs stored in strong rooms across the country and, as such, there was a need for all opposition parties to keep a constant vigil to thwart the BJP's "nefarious plans."

She also felt that opposition leaders should remain in their respective states to monitor the counting arrangements, as well as safety of the strong rooms.

Meanwhile, Chandrababu Naidu continued his tirade against Prime Minister Narendra Modi, saying a certain despondency has crept in in the latter.

"His latest utterances are an indication of Modis despondency. He is talking about Rajiv Gandhi, who died 28 years ago.

He is also trying to derive mileage from the sacrifices of Army men," the TDP chief said at a meeting of the partys Nandyal Lok Sabha constituency leaders here Monday.

Naidu asserted that there was no question of Modi becoming the Prime Minister (again) as the defeat of BJP in the general elections has been "confirmed".

"There is nothing Modi did for the country in the last five years.

Since he did nothing, he is unable to tell anything to the people. Modi remains the biggest failure as Prime Minister," he said and cited TIME magazine's latest cover story.

The magazine featured Modi on the cover of its international edition with a controversial headline and a secondary one that read "Modi the Reformer".

The May 20, 2019 international editions - the Europe, Middle East and Africa, Asia and South Pacific - feature the cover story with the main headline "India's Divider in Chief" while the US edition has a cover story on Democrat Elizabeth Warren, who is running for the White House in 2020.

Hitting out at the BJP, the TDP president alleged that the national party hatched conspiracies to create violence and bring down the polling percentage in West Bengal.

"Non-functioning of EVMs, polling continuing till 9 PM, intimidation of voters through violence...these are all BJPs conspiracy to reduce the voting percentage in West Bengal.

The BJP resorted to such conspiracies in states where it felt its defeat was certain," Naidu alleged.