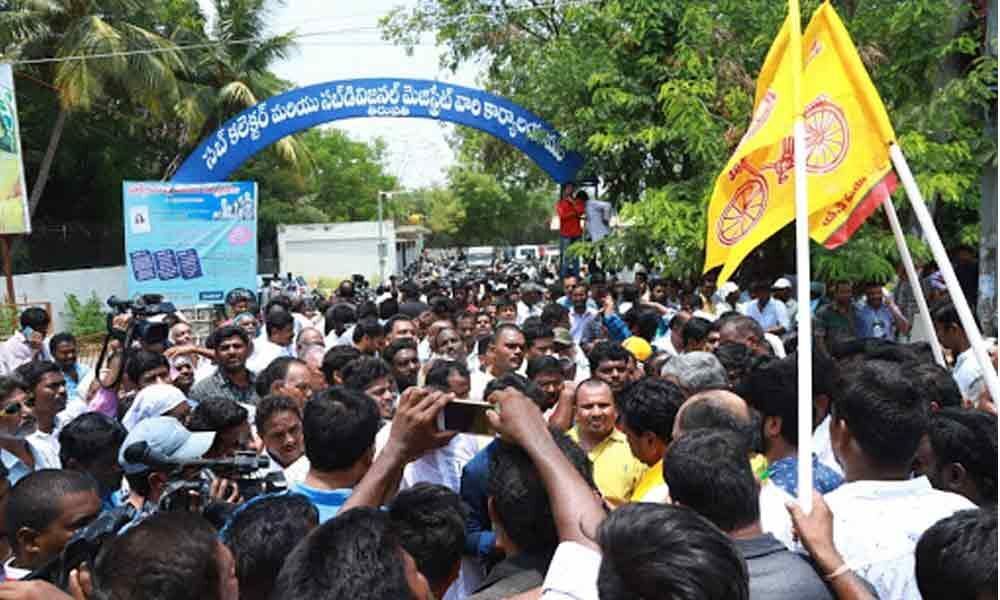 Tirupati: Telugu Desam Party has strongly criticised Election Commission's decision to hold repolling in five booths of Chandragiri Constituency. Led by the Minister for Industries N Amarnath Reddy and party candidate in the Constituency Pulivarthi Nani, party has organised a massive dharna infront of Sub Collector office in Tirupati on Thursday. The Sub Colleges is also the returning officer for th constituency.

Speaking on the occasion the Minister has reiterated their party's stand from the beginning that the EC has been acting at the behest of BJP and YSRCP denying equal opportunities to all parties. Chandrababu Naidu has fought against this attitude of the EC even at New Delhi to protect democratic values and not with the fear of defeat as alleged by opposition parties. He said that though the party candidate Nani has requested EC to order repoll in eight Constituencies where irregularities and rigging took place at the time of polling on April 11.

But the request was kept in cold storage by the EC which has taken a controversial and biased decision in favour of YSRCP candidate Chevireddy Bhaskar Reddy who demanded repoll in five booths. Amarnath has said that these five booths were TDP dominated areas and with the fear of defeat YSRCP candidate wanted repoll there for which the EC has agreed on the directions of Narendra Modi government.

He made it clear that they are not afraid of defeat even if repoll is held as they can get more votes this time in those five centres. But they have been demanding for transparency and equal opportunities to all contesting candidates and said that their right against EC will continue as this was the first time the Commission has been acting in such a biased manner.

Party leaders G Narasimha Yadav, D Ramesh, M Suguna, S Jayachandra Reddy, P Sridhar Varma and others were present. People suffered in the scorching Sun as the vehicles were stranded for hours together on the busy road on either side.