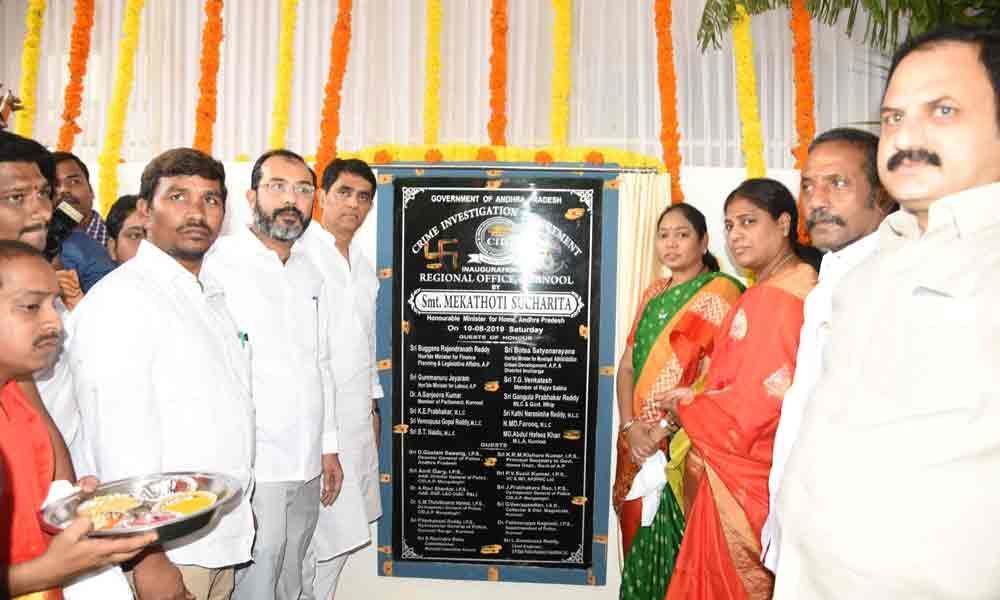 Kurnool: Home Minister Mekathoti Sucharita said that the Police department is giving top priority for women safety. The State government is setting up Mahila Mitra committees across the State to help women and girlchildren, she said after inaugurating the Crime Investigation Department (CID) office building here on Saturday.

The building was constructed at a cost of Rs 1.5 crore at Venkataramana Colony here. Finance Minister Buggana Rajendranath Reddy has accompanied the Home Minister. Speaking on the occasion, Sucharita mentioned that cybercrime and economic offences have come down in the State due to relentless efforts of the CID department.

So far, we have constructed CID offices at Guntur, Visakhapatnam, Rajamahendravaram, and Kurnool, the Home Minister said and added CID offices to come up at Nellore, Vijayawada and Tirupati soon.

The women victims can lodge complaint through www.cybercrime.gov.in or WhatsApp number 912121 11100. The Finance Minister said that the government had sanctioned Rs 3.8 crore of which so far Rs 1.5 crore has been utilised for the construction of the building. Several leftover works would be completed with the remaining funds, he stated.

Prior to the inauguration of the CID building, the Home Minister was given welcome by District Collector G Veera Pandian, CID DG Amit Garg, District SP Dr K Fakkeerappa, MPs and MLAs.