Is the EC impartial or under pressure? 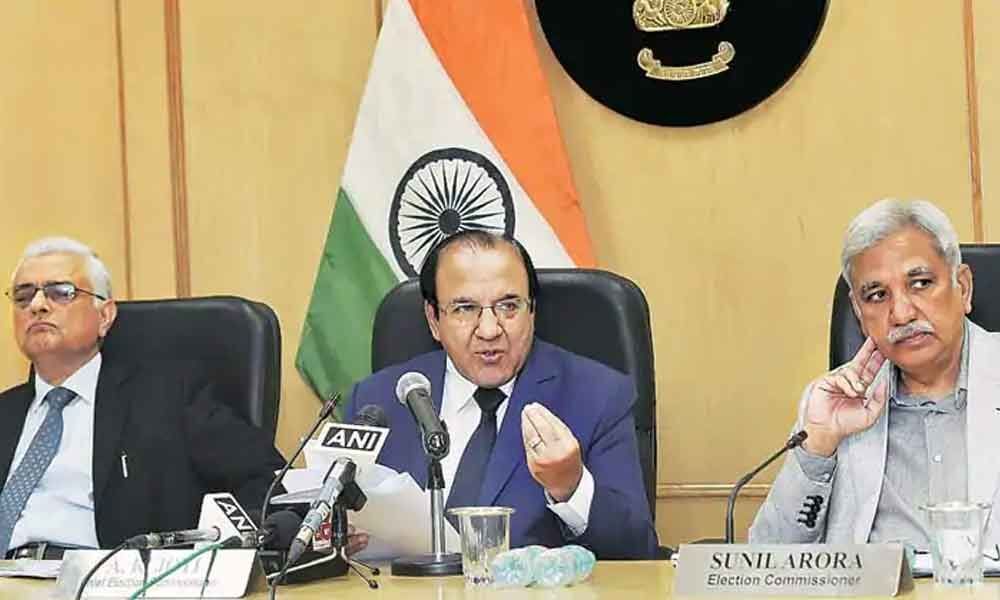 Before the elections were announced, words like democratic compulsion, misuse of all democratic institutions, need to protect the health and preserve...

Before the elections were announced, words like democratic compulsion, misuse of all democratic institutions, need to protect the health and preserve democracy were being chanted by the opposition parties.

Initially it appeared as if it was yet another sloganeering attempt to defeat the BJP and stitch a loose alliance of non- BJP parties.

But once the elections were announced and the model code of conduct came into force on March 10, many things started coming to fore.

It now appears that the Election Commission of India which is tasked with the responsibility of conducting free and fair elections has got itself entangled into several controversies.

Law says one should not only be fair but should also appear to be fair. The ECI certainly has a complicated task but it should not give an impression that it is partisan or helpless.

Never before did the ECI receive this much of flak though before 1990 also the ECI was blamed and was alleged that it is controlled by the party in power at centre.

The ECI got a tag that it was really independent and that it was not an appendage of the executive only after T N Seshan became the chief election commissioner.

Seshan was known to be close to Indira Gandhi and later to Rajiv Gandhi when he was part of the Government.

But after he became the Chief Election Commissioner he ensured that the Executive did not misuse its power and bend rules.

He once even commented that he "ate politicians for breakfast." The country did witness level-playing field during his tenure and that is what exactly the ECI is supposed to do.

The elections which are held once in five years involve huge expenditure and that money does not belong to any individual or a political party.

It is public money and the people should have absolute freedom to choose a leader of their choice.

The ECI at the same time should not think that it has super power and can ride rough shod over the executive in every respect.

The EC certainly has absolute powers to see that there was level playing field and elections are held in a free and fair manner.

But the 2019 elections will go down in the history as mismanaged elections.

The CEC is always a retired government employee but that does not mean that he should be subservient to those who appointed him.

Though it is naïve to think that the Commission, or indeed any institution, is entirely autonomous and immune to pressure from the ruling party.

But in this case the lopsided actions of the CEC have been so obvious that it has ended up raising genuine doubts about the conduct of the elections.

The EC which has been restricting the actions of non-BJP parties in various states by issuing instant orders on various issues including holding of review meetings to tackle drought and drinking water situation, had adopted a different view when the opposition complained of violation of code by the Prime Minister.

It gave an impression that Modi had not violated the model code even while delivering election speeches.

On April 1 at Wardha, Maharashtra, and on April 9 at Latur, also in Maharashtra, after AICC president Rahul Gandhi decided to contest from Amethi in UP and Wayanad in Kerala Modi said that the Congress dubbed the "peaceful Hindu society, those who consider the entire world as their family, as terrorists...

And this was the reason why he (Gandhi) had to run away from a majority seat to a minority seat. The Congress has committed the sin of defaming our 5,000-year-old Hindu culture...

In thousands of years of history, has there been any Hindu terrorist?" The Congress raised objections but EC did not consider their petition.

The EC had given clear instructions to political parties quoting a note dated December 4, 2013 wherein it stated that the "armed forces of a nation are the guardian of its frontiers, security and political system...

They are apolitical and neutral stakeholders in a modern democracy. It is therefore extremely necessary that political parties and leaders exercise great caution while making any reference to the armed forces in their political campaign".

But Modi continues to refer to surgical strikes, Pulwama issue and Balakot incident etc but the EC does not feel that Modi had violated the MCC.

Modi came to Andhra Pradesh and repeatedly hit the Chief Minister below the belt by referring to him not as CM but as father of Lokesh etc.

In the recent row Namo TV was used for publicity without any restriction. Another major controversy centred around the release of the biopic on Modi.

The EC maintained steadfast silence. Finally, it had to be postponed following court's intervention.

But then the very next day, Modi gave an exclusive interview to Akshay Kumar which clearly appears to be a game plan to say what the biopic wanted to convey.

What prevents the ECI from taking suo motu cognisance of such gross manipulations is the big question.

When the issue of NaMo TV was repeatedly raised by opposition, all that the EC did was ask for details.

The BJP leaders are trying hard to counter this argument saying that the EC had issued show cause notice to UP Chief Minister Yogi Adityanath for referring to the armed forces as "Modi sena" and had imposed 48 hours ban on Sadhvi Pragya Thakur.

But then what about the rhetorical campaign of Modi. Being the Prime Minister he went to the extent of claiming that over 40 MLAs of Trinamool Congress were in touch with him and after the BJP wins the elections on May 23 all of them would join BJP.

This has raised several questions. While some said it was panic reaction as Modi realised that BJP was losing and hence he has started horse trading.

What ever it may be, it is unbecoming on the part of a Prime Minister to make such claims even if it is true. It gives an impression that he favours horse trading and defections.

And what is most worrying is that the EC does not find even this as violation of code.

As his speech at Latur showed, Mr Modi had certainly not been cautious while referring to the Pulwama tragedy and the Balakot airstrike.

In contrast to the relaxed appraisal of the Prime Minister, the EC scrutinised the speeches of Opposition leaders promptly and in far greater detail.

The notice served to Congress president Rahul Gandhi on May 1, for instance. The complaint was filed on April 27 and taken up within days.

In contrast, the commission summoned its full meeting to examine complaints against the Prime Minister only after Congress Mahila Morcha president Sushmita Dev filed a writ petition in the Supreme Court seeking a directive to the EC to hear her party's petitions against Modi.

The Election Commission has also been slow in reacting when natural calamities needed instant attention.

Drought conditions prevail in many parts of Maharashtra and Andhra Pradesh but the government in these states was not allowed to hold review meetings.

Maharashtra Chief Minister Devendra Fadnavis wrote to the Election Commission demanding relaxation in the model code of conduct, in force since March 10 for the Lok Sabha polls, to undertake drought relief measures.

In his communication to the EC, Devendra Fadnavis has cited similar relaxation given in 2009.

"To assess the severity of the situation, there is a need to hold a cabinet meeting of the state government," Devendra Fadnavis wrote in his letter.

Now the Andhra Pradesh government is also contemplating to hold cabinet meeting next week to discuss the drought situation and assess the severity of the situation. It remains to be seen how the EC would react.

When it was predicted that Andhra, Odisha and West Bengal would be affected by Fani super cyclone, the government wanted to hold review meetings but permission came very late. The EC on its own did not act. The Odisha CM had to go to Delhi and seek permission.

The AP government also wrote a letter to lift code in the four districts which were likely to be affected but the relaxation came after the cyclone took a curve and crossed the AP coast.

If Seshan is remembered as a man who ate politicians for breakfast, the present ECI would perhaps go down in the history for being most vulnerable to pressures.