Adversity as a great opportunity 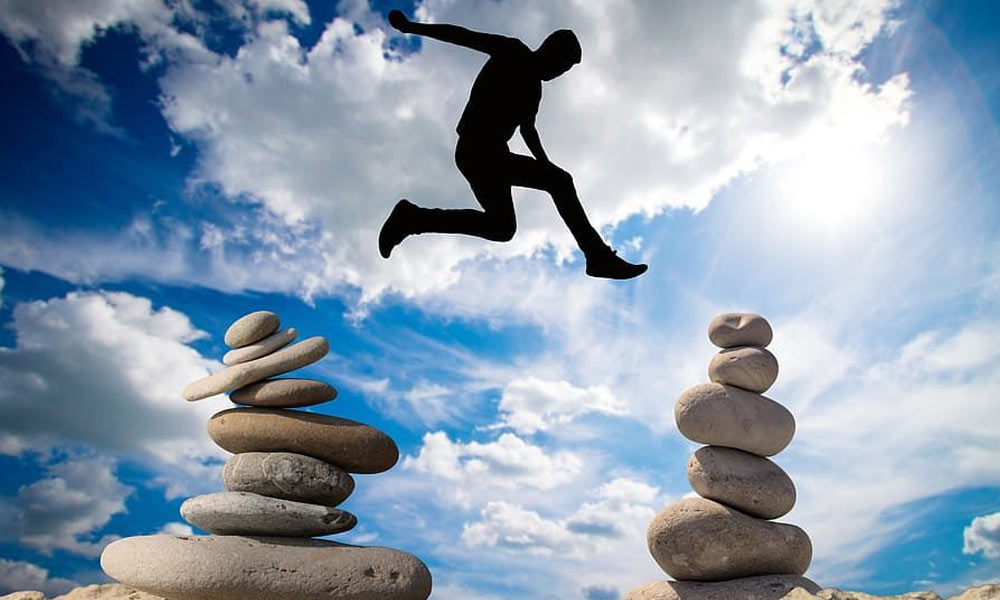 Adversity as a great opportunity

Not many of us will probably be familiar with it, but the song “always look on the bright side of life”, by Monty Python, (from the film ‘Monty Python’s life of Brian’), very popular in Britain, as a common singalong in public events

Not many of us will probably be familiar with it, but the song "always look on the bright side of life", by Monty Python, (from the film 'Monty Python's life of Brian'), very popular in Britain, as a common singalong in public events. Reminiscent, in a way, of the all too familiar adage about a pessimist and an optimist looking differently at a half-filled glass – half empty, or full, respectively - it conveys a simple, but powerful, message. And that is, to make the best out of every situation one faces in life.

I remember how, as an officer trainee in the late 1960s, I was taken in by the techniques of modern management, which were just beginning to make their presence felt by then, thanks to Gurus such as Peter Drucker. Several varieties of management, such as Management by Objectives, OKRA (Objectives, Key Results and Actions), and the like, were increasingly in the news, as instruments of improving efficiency and focus in the corporate as well as the public sectors.

Another method, brought in by the winds of change in the late 1960s and 70s, was what has become commonplace now as the SWOT (Strengths, Weaknesses, Opportunities and Threats) analysis, developed originally by Alfred Humphrey at the Stanford Research Institute. While analysing a given situation or assessing the health of an organisation (or, for that matter, a new way of doing things), one learns to look, not merely at the weaknesses and threats, but also at the strengths and opportunities.

Returning to the subject in the discussion, many things changed over the last one year, thanks to the compulsions and imperatives occasioned by the unprecedented spread of the Covid – 19 virus. For instance, four out of five people (according to a study), changed their eating habits. They adopted healthier eating habits, and started focusing on food safety, avoiding restaurants and other ready food sources, they also did more shopping, cooking, eating healthier and even thinking, differently, as a result.

Many of them, probably as a result of the impact advertisements in the print and electronic media had on them, began to depend on home remedies to improve their immunity and to consume more fruits and vegetables. Again, probably on account of the same influence, there was a marked fall in the consumption of sugar, fried foods and salt on their part with the focus shifting to plant proteins.

Meanwhile, the social media, not to be left behind, through their cooking tutorials on platforms such as YouTube and Facebook, made cooks out of people who had hardly even seen the insides of a kitchen before!

On a completely different plane, the situation also offered a rare opportunity for contemplation. One was able to sit back and look at the big picture, and reflect upon options and priorities, things which had received little attention before, in the hustle and bustle of day to day life.

Thanks to the constraints imposed by the environment, organisations were also able to take a fresh look at the rigidity of their systems, and the consequently tardy results. They realised that procedures could be skipped, or accelerated, and rules winked at – to create an environment that enabled quicker decision-making. Realisation dawned upon them that, earlier, people spent as much as 23 hours per week in meetings, half of which were considered a waste of time.

Rethinking the issue led to the laying down of new restrictions on meetings, which were either unnecessary, or longer than required. What is more, the by now well accepted form of "work from home" gained wide acceptance.

Service providers were also quick to grab the opportunity offered by the prevailing conditions and shifted to the delivery mode. Schoolteachers taking classes online became a common place occurrence, as did home delivery, on telephonic orders, of fresh vegetables and fruits, food items and medicines. The situation also proved a boon to services such as Flipkart and Amazon as people took more and more to ordering things online. Similarly, as visiting doctors became difficult, more and more virtual diagnoses and prescriptions began to happen. Courts of law also took to holding virtual hearings.

Among the other blessings that came in disguise during that time were great opportunities, for social bonding, and other ways of connecting with people and helping them. The not so unnatural feeling, of isolation and loneliness, which some people were bound to feel, was fortunately counteracted by the feeling of "we are in this together", infused in them by well-meaning friends and relatives. The times also saw heartwarming incidents such as Italians singing together from their windows and balconies.

Apart from attempts at improving the mood of the public in general that were worldwide in nature, many small but local initiatives also helped improve morale. Social coherence, in other words, became the buzzword.

On the other hand, it was not as if generosity, goodwill and empathy along were in evidence. Hoarding, of things like food, medicines, toilet paper, as well as self-serving and ego centric behaviour were, unfortunately, also in evidence, although, fortunately, on a very small scale.

Not surprisingly the Covid – 19 situation also resulted in a dramatic decrease of industrial activity resulting in many not unwelcome consequences such as a decrease in road, railway and a traffic leading to reduced pollution. Quite obviously, many of the outcomes of the situation we have witnessed over the last one year were not only good as responses to the situation, but also such as to provide mankind with sustainable and lasting benefits, even in the future, in the post Covid – 19 situation.

It is really up to us all, now to preserve, protect and defend the unexpected benefits, that came as a fallout of the perceived adversity of an unprecedented, an unforeseen, situation. And use the opportunity to reconsider our lives and reorganise them in a manner that is people-friendly and compatible with the imperatives of environmental protection and economic growth.

In conclusion, we need to realise that the role we play on this planet needs to be moderated, following an acceptance that things cannot always be what we want them to be. No matter how well – planned and organised we are, and no matter how much we live in the Anthropocene – the era characterised by significant human impact – we are, in the ultimate analysis, not in control.

Clearly, the period we have all been through had its dark side, and positive side, as well as opportunities for realising the fundamental changes we need to adopt in approaching the world. These changes should include looking at the brighter side of life, and realising that challenges can be opportunities.

One now begins to wonder whether one should really wish the crisis to come to an end soon. Because the longer it lasts the greater the opportunities will be, for making changes, and altering deeply rooted habits and convictions.

Adversity, in other words, can be a great opportunity. It has been said, that a war not only destroys but also creates opportunities, for those who are resilient, and care to rebuild. And, today, our war, against Covid– 19, has brought us similar challenges and opportunities. It is for us to decide whether we can measure up to the opportunity.

As the poet Iqbal said, "Khudi ko kar buland itna ki har taqdeer se pehle khuda bande se khud pooche bata teri raza kya hai". Opportunity, like beauty, is, apparently, in the beholder's eye.To end on a lighter note, a senior colleague recently asked me why it was called a lock 'down' when, as a matter of fact, we were all locked 'up'!