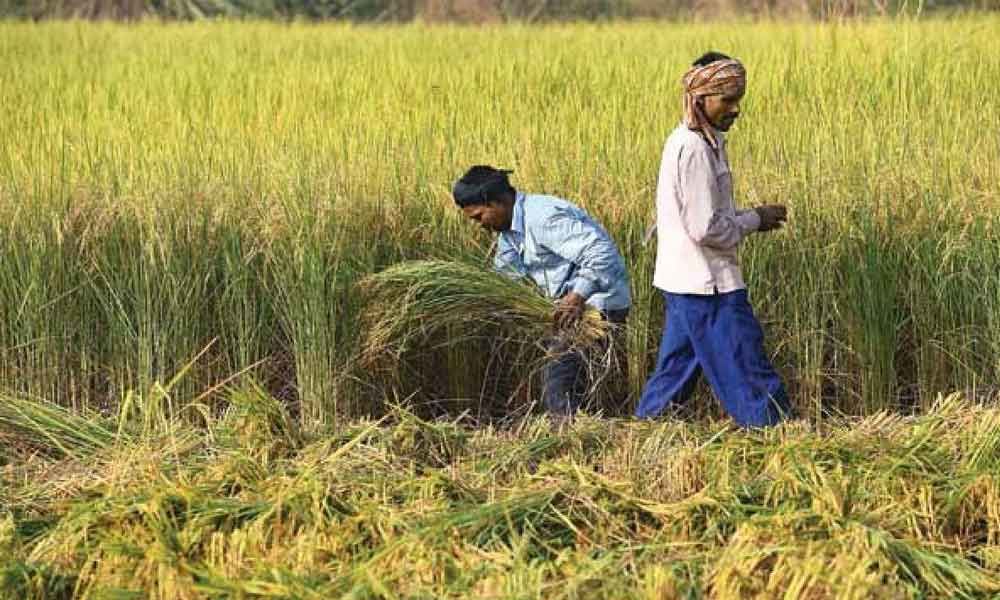 The Centre for Monitoring Indian Economy has assessed that the incomes of our farmers have increased by 7 percent per year between 2013 and 2019.

The Centre for Monitoring Indian Economy has assessed that the incomes of our farmers have increased by 7 percent per year between 2013 and 2019. Against this backdrop, we have to assess the steps required to attain the government's commitment to double the income of the farmers by 2023.

It will be necessary for the farmer's income to increase by about 30 percent per year to attain this target. The strategy outlined by the Finance Minister in the Budget is to help the farmers increase the quantity of production.

For example, use of balanced fertilizers and solar pump sets has been encouraged. This step appears to be in the right direction. More production normally means higher sale value and more income.

However, the connection between increased quantity of production and increased income is not only tenuous — it can even be negative because it is intermediated by the price of the produce. The farmers of Palanpur had dumped their large harvest of potatoes on the roads because they could not get a remunerative price for their produce.

Farmers of Rajasthan faced a similar fate when their crops of guar gum could not be sold at remunerative prices. Often the farmers could not even retrieve their cost of harvesting the crops let alone getting paid for the seeds, sowing, irrigation and fertilizers.

The decline in prices of agricultural goods is taking place continuously for the last few decades. New technologies have led to an increase in production. These include borewells, tissue culture and chemical fertilizers.

Now geo-mapping is making it possible for the farmers to know the exact area in their fields that are deficient in particular fertilizers. Drones are being used to track disease. Such technologies are being developed every day.

Accordingly, the supply of agricultural goods is increasing. This, however, is not accompanied with a parallel increase in the demand in the market because the global population is not increasing in the same proportion.

The ever-increasing supply coupled with relatively stagnant demand is leading to a long term decline in the prices of agricultural commodities. The development of biofuels is providing some relief. Farmers can produce sugar cane for the production of diesel.

However, the price of diesel too has been declining in the last few years. The increase in the quantity of agricultural production achieved from the valiant efforts of the Finance Minister need not lead to an increase in incomes of the farmer. On the contrary, it can accentuate farmers' distress of not being able to recover his cost of production.

A better strategy would be to improve the quality of the agricultural produce. The Finance Minister has taken a small but laudable step in this direction. She has said that a particular crop will be identified for each district of the country and a horticultural mission around that crop will be put in place.

This step is in the right direction and must be implemented with all seriousness. India has an unparalleled diversity of climate. We have cold areas in the Himalayas and other mountain ranges during the summer; and warm areas in Kerala and Tamil Nadu during the winters.

Thus, we can grow winter horticultural crops like roses in our mountains during the summer and in the south during the winter and supply to the global market throughout the year without an interruption. A small country like Netherland supplies Tulip flowers to the entire world and earns about 2,500 crore rupees every year.

This is about 8 percent of our total agricultural produce of Rs 30,000 crore. The arable land in Netherland is 10 lakh hectares against 1600 hectares in India or 0.6 percent. In other words, Netherlands is producing about 12 times the value per hectare than us — that too with no diversity in climate. We can certainly do much better.

The development of district-wise specific agricultural crops will require deep research. Our universities and laboratories of Indian Council of Agricultural Research (ICAR) are way behind. Their situation is highlighted by the experience of a farmer.

My trees also gave small fruit." That admission did not recover the loss incurred by the farmer. There is a need, therefore, to set up an IIT- or IIM-type horticulture institute in each district or a cluster of districts that can actually provide the correct guidance. This will then have to be supported with warehousing, cold chain and export infrastructures. This will require effort but can be done.

The second step to increase the incomes of the farmers proposed in the Budget is to enable them to establish solar power plants on their barren fields. The challenges here are same as those faced by commercial solar power producers. Anecdotal information suggests that large solar farms are not finding buyers for their electricity at a price as low as Rs 2.50 per unit.

The cost of production of a small solar power farms located in a far flung areas will be much more. The problems of grid connectivity will also be very difficult. The rural feeders for the supply of electricity are often down. How will the solar power be transported during such times? Then there are issues of metering and synchronisation of the electric supply.

It may yet be possible to enable farmers to establish solar farms. Some States already have policies that enable house owners to supply extra rooftop solar power supply to the grid. But this has not taken off as of now.

Roof top systems face lesser problems of connectivity because urban power supply is more regular; shorter lines are required to connect with the grid and technical assistance is easily accessible in the cities. It will take a huge effort to persuade the bureaucracies of the State Electricity Boards to enable this effort. That said, it is a possibility that holds potential.

The promise in the Budget to double the incomes of the farmers by 2023 is almost certainly going to fail. This target can only be achieved if we first identify the crops especially suited to a district, then set the standards for quality control, make the infrastructure for exports etc.

Concrete steps are needed in this direction. Mere increase in production of regular agricultural crops — as planned in the Budget — will only add to the problem.