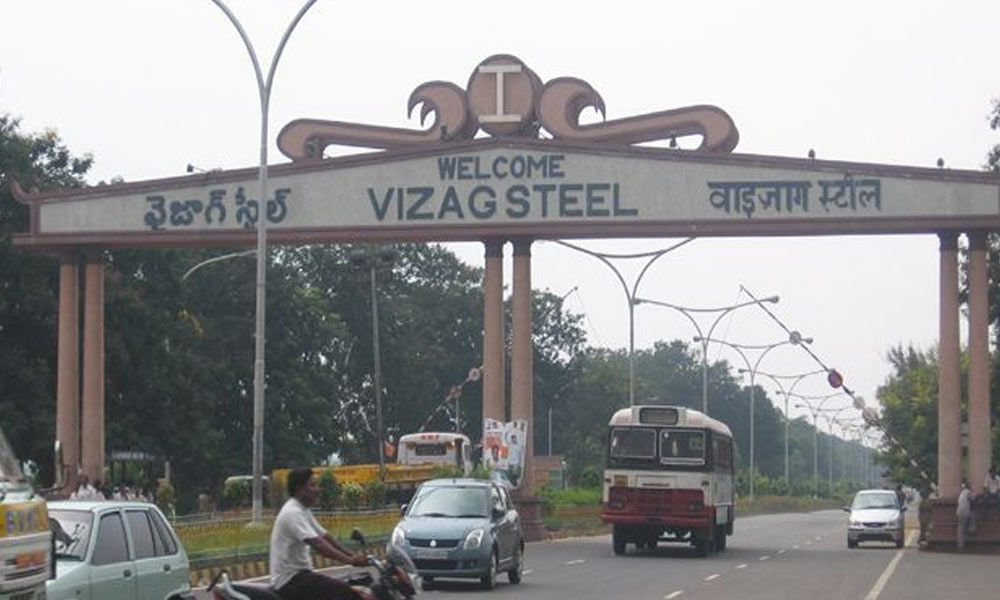 The pride of Andhra Pradesh, 'Visakha Ukku Andhrula Hakku' (Visakha Steel Plant) is set to slip into private hands. Our political leaders who keep chanting the mantra of Mahatma Gandhi, Atmanirbharta, Make in India etc do not seem to be having any consideration for the sentiments of the people of Andhra Pradesh. Vizag Steel Plant has become a symbol of Telugu pride as it became a reality after protracted struggle in which several people lost their lives.

Andhra Pradesh has lost special category status after bifurcation in 2014. Some of its major ports like Machilipatnam port, Krishnapatnam port and Kakinada SEZ have been privatised. It has lost a railway zone and now another symbol of Telugu pride and sentiment is going to be handed over to a private company.

"Agitations by political parties cannot stop from VSP going into private hands. The plant will not go to any other country, it will remain at the same place," is what the former Union Minister Sujana Chowdary said. Later he clarified that what he meant was management should not be the issue. If someone is willing to have tie up with iron ore mines and invest and run it more efficiently, capacity can be increased and it can become cost efficient. This apparently sets the tone for the arguments that are going to be made in favour of privatisation by the Centre and BJP leaders.

This statement assumes importance as it comes a day after the AP BJP which has always been taking a dual stand on contentious issues on Thursday stated that they had already sent their leaders including Sujana Chowdary to Union Finance Minister Nirmala Sitharaman urging her not to privatise the plant.

Regarding the special category status also, the State unit has been reiterating that it was for special category but finally there was nothing they could do and started singing the package song. A repeat performance is once again on the cards. It is also surprising that the state government which has decided to set up integrated technology park in Vizag as well as high end skill university, incubation centre, labs, state data centre etc in the shore city, so far has not reacted to the proposal to privatise VSP. Even MPs did not raise any objection either on the floor of the Parliament nor did they submit any memorandum to the Prime Minister or Union Finance Minister.

The leaders of all parties seem to be more interested in being vociferous on trivial issues and fighting legal battles rather than trying to protect the steel plant. It seems people of Andhra have lost their fighting spirit or for some unknown reason have become too submissive. The Centre too appears firm on pushing ahead with its decisions in the name of putting economy on fast track.

It is now certain that unless people take the lead and convince the centre that VSP should not change hands, nothing can save it from being privatised. It's time all leaders in state and at centre recall the history of Vizag Steel Plant and why it has become pride of Andhra and save the plant from being privatised.

It is the first shore based Integrated Steel Plant in the country and is known for its quality products. It is a market leader and caters to the needs of diverse Industrial sectors. It is the first Steel plant to be certified ISO 9001:2008 (presently2015), ISO 14001:2004 (presently2015), OHSAS 18001:2007 and ISO/IEC 27001:2013 Standards. It is also the first PSE to be certified ISO 50001:2011 - Energy Management Systems and has acquired CMMI Level 3 Certification. CMMI is a process improvement approach that provides organisations with the essential elements of effective processes that ultimately improve their performance. An appraisal at maturity level 3 indicates the organization is performing at a "defined" level.

About 54 years ago nine Vizagites, including six students and three workers, died in police firing as the agitation for the Visakhapatnam Steel Plant picked up after the then Prime Minister Indira Gandhi did not seem to honour the demand of the people of Andhra Pradesh.

Those holding top positions or on the verge of retirement in the VSP now were in schools when the agitation and police firing happened. Six were killed near AVN College and three near the old post office when people took to the streets in huge processions. People alleged that the police fired at peaceful protestors.

About 70 legislators, including MPs and MLAs, resigned from their posts demanding for the PSU to be set up in Visakhapatnam. The demand gained further impetus as a foreign agency certified that Vizag was the most suitable place for shore-based steel plant, the demand became more louder. Many other states also tried to get it though they were not so qualified for it.

Finally the Union Government had to take a decision to set up the unit in Visakhapatnam. The old timers will agree that this was the beginning of a turnaround for Visakhapatnam which till then was a sleepy town.

That was the first step towards industrialisation and today it has emerged as a global city where the present government wants to have its "Executive Capital." It remains to be seen whether the State Government would agree for privatisation of the steel plant even while it is in the process of shifting of capital to the shores of Vizag or will it resist any such move.

About one lakh people are dependent on the steel plant, including 17,000 permanent employees and workers and 16,000 contract workers. It is now the biggest PSU in the state. The steel plant, launched with 1.7 million tonnes capacity, was later expanded to 7.3 million tonnes without any financial support from the Centre. VSP was paying tax to the tune of Rs 17,000 crores.

Moreover, in 2011 Parliament standing committee recommended that iron ore be given to them. In 2015 union minister R K Singh committee also recommended that mines be allocated. According to RINL annual report 2019, RINL had shown a turnover of Rs 21,000 crore. For last 20 years the company has been showing increase in turnover. The Centre got money from it as taxes but never invested anything from its pocket. It has assets worth Rs 36000 crore.

Hence, the Centre's argument that it has decided to privatise because VSP had incurred heavy losses in 2017 and 2018 does not hold ground.

According to the report submitted by the Union Ministry of Steel, Vizag Steel Plant is the only steel-manufacturing PSE in the country that has no captive iron ore mine. The losses were majorly due to the lack of captive mines due to which the RINL is procuring the iron ore supplies at market price, resulting in a loss of at least Rs 5,000 on every ton produced.

Where there is will there is a way says the adage. If the Centre really wants to bring a turnaround, it can do so. It can take a decision to allot some captive mines for VSP and see that it once again becomes a profit-making unit. The loss of about Rs 3,600 crore is not a very big amount.

We have precedents like the 100- year-old Singareni Collieries Company Ltd (SCCL), a 51:49 Central-Andhra Pradesh government venture, which had an accumulated loss of Rs 1,219 crore as of 1996-97 but due to the turnaround strategy it completely wiped out the losses within five years of hitting the turnaround path proving the point that disinvestment alone need not be the solution for turning around not so sick public sector companies.

Another big question is (God forbid) if the plant is privatised, will it allocate captive mines to the buyer. Instead, why not allocate captive mines to RINL and see that VSP becomes a profit-making PSU? In fact, it is said that when TDP was part of NDA, the proposal for privatisation was discussed but the TDP government at that time said that it should be taken out of RINL and given to SAIL so that mines problem would be solved. But the Centre did not take steps in that direction.

Sometime back, the South Korean steel maker POSCO after shelving its plan to set up a plant at Jagatsinghpur in Odisha, stepped up efforts to set up a high-end steel plant in a joint venture with the RINL.The POSCO also sought 1,170 acres of Vizag Steel's surplus land for setting up the plant.

This move was strongly opposed by the VSP employee unions as they felt that the entry of POSCO in the sector will halt the expansion of Visakhapatnam Steel Plant in future. Now the latest speculation is that Adani group has shown interest in VSP.

The employees who are second and third generation children of those who fought for the steel plant say that if the government feels that it would be able to mop up Rs 1,000 or 1,500 crores by way of selling it to private company to reduce the fiscal burden on the exchequer, they were ready to mobilise that much amount without taking a bank loan and pay to the centre. Under no circumstances should VSP be privatised, they say and certainly their concern needs to be considered.

Privatisation cannot be the panacea for all ills. One could have supported the centres decision if it was a 'Bimaru' company beyond repair. But it is not so. The VSP is among one of the Navaratnas and has potential to once again become a profit-making unit provided the Centre does not insist on killing it.