Why did three Chief Ministers support the RTI killer Bill? 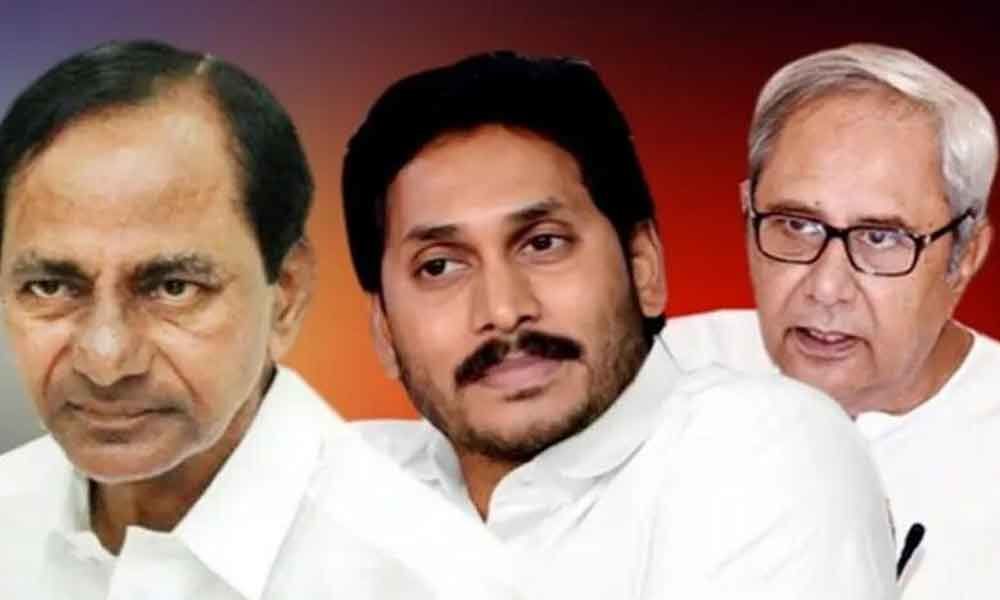 The Bill could not have been passed in the Rajya Sabha without the support of MPs from BJD, TRS and YSRCP. The BJP is planning in a strategic way using all its tactics to expand its regime and replace the governments in these three states before the next elections scheduled after four years.

In Andhra Pradesh the BJP has already bagged four Rajya Sabha MPs, who joined it from Telugu Desam. It is not known whether Chandrababu sent him or these four most loyal MPs ditched him.

It is also reported that several legislators from TDP (out of their strength of 23) to join BJP. AIMIM President Asaduddin Owaisi predicted the possible expansion of BJP in Telangana. The BJP gave four surprise wins in Lok Sabha elections by trouncing important leaders of TRS including daughter and close associate of KCR.

BJP saw a three-fold rise in their vote bank within six months between December 2018 Assembly polls and May 2019 Lok Sabha Elections.

In Odisha the BJP has already made inroads by winning 8 of 21 MP seats and nearer to winning over it, but for its veteran Navin Patnaik's intelligent moves to save his power.

The fact that these three states could stall the BJP from entering the power corridors by the political strength of their regional parties, should have worked against their decision to support the BJP in Rajya Sabha. There was a fair chance of saving RTI from the clutches of NDA sarkar.

A critic, DK Singh commented in the Print "Naveen Patnaik, Jagan Reddy and KCR must be feeling the BJP breathing down their necks. But can they stop sleeping with the enemy? Very unlikely.

Splurging money on populist schemes and programmes, they must indulge the Centre for funds' transfer, be it in the form of tax devolution or grants in aid or special assistance.

Equally importantly, no one wants the parrots to be released from the cage by their masters in Delhi".

Here is the Open letter to three Chief Ministers from this author :

I am surprised when you have supported the RTI (Amendment) Bill 2019, and asked your MPs in Rajya Sabha to vote for this Bill. I do not know whether you or your MPs have read the Bill and understand the implications of the changes are proposed.

I thought all three of you are eminent personalities sacrificed a lot in taking up the issues of the people, striving for the interests of the region you are representing and also the rights and sovereign powers of the States under Indian Constitution.

Please try to take assistance of your legal teams and find how your support to this bill will kill your sovereign powers at least now, which you should have done before supporting it.

You have a duty to answer these questions, morally, legally (as Section 4(1)(c) of RTI Act mandates), constitutionally (Federal principles) and politically (as you have proclaimed that you would form a front and fight for the rights of the states, against the centralization of powers by the Union)

b) Do you know that when your MPs voted for this Bill, they have laid at the feet of the Central Government the liberty, autonomy and sovereignty of the people you are legitimately expected to represent for no reason, which is totally against the norms and principles of federalism?

c) Do you know that this kind of most unjustified and unconstitutional surrender of your sovereignty to powers of Delhi, with specific reference to your powers of appointing an information Commissioner will disable you from determining the term and status of your own Commissioners?

d) Do you know that this is beginning of surrender of your powers at Delhi Sultans at the detriment of interests of your own people and contrary to the basic structure of the Indian Constitution?

e) Do you know that the RTI was helping the millions of people to empower themselves, resolve the grievances through just a ten-rupee RTI application and preventing small corruption in thousands of small Government offices and thus performing the job of good governance, perhaps which you are trying to give in these three states?

f) Do you know that the Government of India did not place before the Parliament any information about what kind of demotion in status they want, what term they want to fix and what salary they propose to give is to Commissioners at Centre or Commissioners in your states?

Have you read that the Bill says their term will be 'as prescribed by the Centre', and did they tell you what they are going to prescribe? Did you ask your party MPs to support Bill without knowing what will be the status of your future Information Commissioners?

Are you happy about it? Do you think your people will not be ashamed of this bankrupt situation where their Chief Ministers do not know the status of Information Commissioners of their states tomorrow?

g) What is that you have achieved by this support to this unconstitutional, anti-democratic and anti-federal Bill?

h) Was there any fear or apprehension you are suffering from? Among the three of you only one has some charges against him pending, then why other two were worried about Centre? What compelled you three to surrender your sovereignty to Delhi sultanate?

Please release detailed statements in your respective capital cities explaining what compelled to accept this unconstitutional Bill which destroys the independence of Information Commissioners and encroach upon the sovereign rights of states, which you did not mind sacrificing.

Remember, you are answerable and accountable to the people of your state. Regards