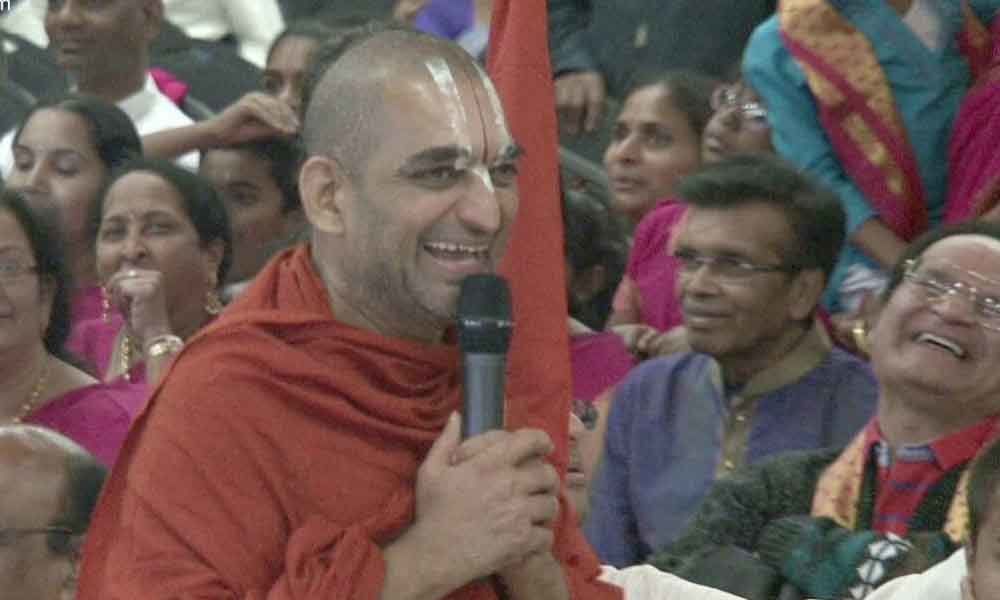 Tridandi Chinna Jeer Swamy has recently held forth on the importance of preserving the caste system by invoking the much-discredited analogy of the...

Tridandi Chinna Jeer Swamy has recently held forth on the importance of preserving the caste system by invoking the much-discredited analogy of the human body and its many organs doing their jobs for the survival of the organism. He was speaking obviously to a receptive upper caste audience.

Curiosity about Tridandi led one to discover that it means three sticks. Tripod, for the modern youngsters. According to a website on Hinduism, Manusmriti has a reference to Tridanda Sanyasa that Sri Vaishnavas follow, "That man is called a true tridand in whose mind these three, the control over his speech (vagdanda), the control over his thoughts (manodanda), and the control over his body (kayadanda) are firmly fixed."

Control appears to be the key word here. The 'tripod swamy' is known to visit prestigious scientific institutions like the IITs and enlighten them about how Darwin was wrong and God created the universe. According to the newsminute.com article, he also runs science and technology colleges.

One can ignore such swamys if they peddle their wares to equally spaced out upper caste audience. The problem arises when it happens on a large scale through big media and bigger political patronage.

The Chief Ministers of both the Telugu states appear to have great admiration for the man, even as both of them claim to be the great modernisers and promoters of technology.

In Telangana, the pravachan of 'tripod swamy' hit the headlines when the state was going through a veritable epidemic of caste-based atrocities. In the four years since the birth of Telangana, over 40 caste crimes have occurred.

The brutal killing of Manthani Madhukar to prevent his marriage to an upper caste girl by her family saw the local politicians and the police actively colluding with the killers to pass off the case as one of suicide. Weeks of protests by civil society groups and a high court order compelled a re-post-mortem of Madhukar's body.

It led to the suspension of the local policemen who obstructed the investigation initially. But the sealed cover remains unexamined by the high court as the case does not come up for hearing even after a year has passed since.

The local politician protecting the accused was given a ticket once again by the ruling TRS party but lost in the recently held assembly elections.

This case was followed by the murders of Naresh and Swathi in Bhongir, murder of Pranay in Miryalguda and several others to preventing inter-caste marriages.

Organisations like the Bahujana Pratighatana Vedika (BRF) and Kula Nirmulana Porata Samiti (KNPS) lend moral and legal support required for the victims of caste atrocities and have been documenting the cases.

In March 2019, U Sambasiva Rao of BRF filed a PIL in the Telangana High Court seeking a Special Investigative Team to investigate the scores of atrocities committed to prevent inter-caste marriages and the failure/lack of will of the state machinery to investigate any of the cases and to provide justice to the victims.

The SC, ST Prevention of Atrocities Act is rarely, if ever, invoked.

The PIL demands that the cases must be investigated under the guidelines of the Supreme Court on "honour killings". The High Court sought the response of the state government of Telangana on the issue.

Apart from the apathy of the government in ensuring justice through deterrent action in such cases, there is a systematic attempt to set back the social and economic progress of marginalised groups.

The neo-liberal economic policies of the state government of Telangana have resulted in subjecting the marginalised groups to further distress. When the new state was formed, the party in power promised 3 acres of land to landless dalit families.

Nearly 62 per cent of the population are marginal farmers with less than one hectare land, with another 23 per cent holding less than 2 hectares.

Even as this marginalisation has been a reality, lakhs of acres of land is being taken away from the poor claiming eminent domain for Haritha Haram kind of schemes, if not for other environmentally disastrous enterprises like open-cast mining, thermal power projects, pharma cities.

Irrigation which was a big promise of the separate state movement, has now come to bite the small farmers whose land-holdings are under threat in various parts of the state.

The continued economic marginalisation of a large chunk of the population also leaves them vulnerable to social assaults.

When a self-styled religious guru holds forth about the need for castes to continue in their traditional occupations, we have to recognise that he is speaking for the upper class, upper caste interests who have captured the state's resources and are blocking the legitimate claims of the other citizens to their rightful share of the economic prosperity.

The brutal accumulation of wealth on the backs of the labour of the poor is packaged in an obscurantist religious colour by the gurus who are essentially protecting the interests of the ruling elite.

The caste system is a way of ensuring perpetual cheap labour for the rich upper castes.

If the poor marginal castes become landed, get educated and liberated from their dependency, the upper castes will have to fend for themselves like everyone else and this is unpalatable for them.

For the peddlers of Manu Smriti like the 'tripod swamy' this is a meal ticket. Their comfortable survival depends on this upper caste project.