Modi's new India should have space for Opposition parties too 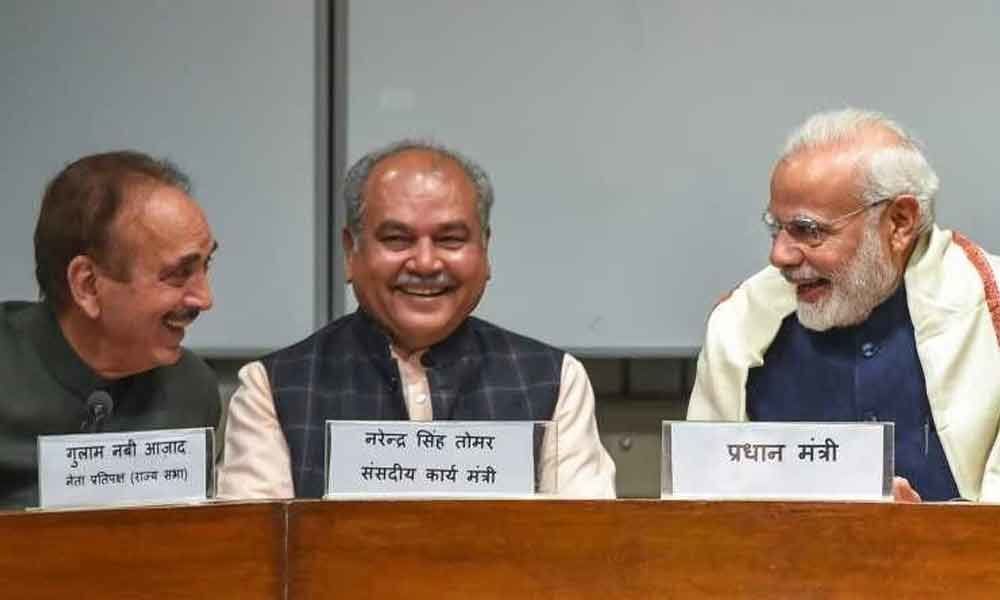 Your editorial ' Anti-Modi rhetoric over J&K will harm India' published on August 24 certainly contains a good message and a well- intended...

Your editorial " Anti-Modi rhetoric over J&K will harm India" published on August 24 certainly contains a good message and a well- intended counselling to all people and political parties especially those who try to derive political mileage by blaming Modi for his path breaking attempts to claim complete sovereignty over J&K which is an integral part of India.

No doubt, this type of rhetoric of political rivals of Modi has the potential to help Pakistan by internationalizing the Kashmir issue to influence the opinion of international community and UNO in its favour to win a diplomatic war against India.

Your timely editorial sounds warning bells to all of us about the impending heavy price to be paid by our country if all of us are not united on what Modi is doing to completely integrate J&K with India by courageously checking the sinister designs of Pakistan which is trying hard to acquire the territory of J&K by aiding and abetting terrorism there.

Obviously, the need of the hour is to sink our political differences and give a strong and one voice with regard to our claim over J&K.

There may be reservations across our political landscape about the hasty way pursued in abrogation of Article 370 and 35A and in downgrading and bifurcating the State in to two Union Territories with no consultations with the stakeholders of J&K such as people and political parties of that state.

But, there shouldn't be any second opinion about the need and compulsion to do so given the deteriorating situation in J&K where people are in distress with no development because of Pakistan sponsored terrorists gaining ground there to play a destructive role of stoking hatred and animosity among people against India with a view to lure them to serve the cause of Pakistan and terrorist organisations.

All of us ought to understand the necessity of the radical step taken by Modi government by ignoring the shortcomings in adhering to democratic norms in the decision- making process. It is a welcome feature that several non-NDA parties such as BSP, TDP, TRS, YSRCP, AAP and BJD expressed solidarity with Modi in this issue.

This bold step of Modi has enabled him to attain an astounding popularity for himself among people of India where the volume of vote bank of BJP has reached an unprecedented level. Now, there won't be any shape for BJP without Modi and for that matter a voice is resonating across the Nation that Modi is India and India is Modi.

It is a fact that Modi is now seen as the strongest PM of India in the history of Independant India. Certainly, India needs a strong leader like Modi to guide the nation to scale greater heights. At the same time ,India needs strong opposition also to criticise the government for its wrong doings and deficiencies to enable democracy to work effectively.

It is a matter of worry to all of us that the opposition is becoming more and more fragile and it is not in a position to stand with some minimum credibility before behemoth like Modi. This doesn't portend well for Indian democracy. Modi needs to do so much on economic front.

It is a matter of great concern that Auto sector, real estate sector are in doldrums. Unemployment is now at record level like never before since 45 years. We have to find effective ways to come out of economic slowdown and unprecedented depreciation of rupee.

Large scale reforms are required to improve the Banking sector and to boost the incomes of farmers. Quality education and better healthcare are still elusive to millions of people.

Modi shouldn't be complacent about his perceived success in addressing the complex issue of J&K. He has a herculean task of taking the economy to a size of $5 trillions by 2025 for which he has to work assiduously in right direction by taking the opposition in to confidence.

Even in Kashmir also, he should try to win the hearts of Kashmiris by upgrading the infrastructure there and by improving their living standards rather than annexing the territory with military power.

Indisputably, Modi has become an iconic personality among most of the people of Hindu religion. I hope and wish for a day where Modi occupies a prominent place in the hearts of all 130 crore Indians irrespective of their religious identities.

To happen this, Modi should strive hard to inculcate a tolerant attitude among his deputies in BJP towards diversity of India to build a strong nation which has inclusiveness in all aspects failing which Modi cannot attain the stature of great leaders like AB Vajpayee and Pandit Nehru even if Modi achieves success in dealing with burning issues like Kashmir.

A vibrant opposition rather than a decimated opposition would certainly help Modi to achieve what none of his predecessors achieved in independent India. All the best to Modi in his mission to build new India.