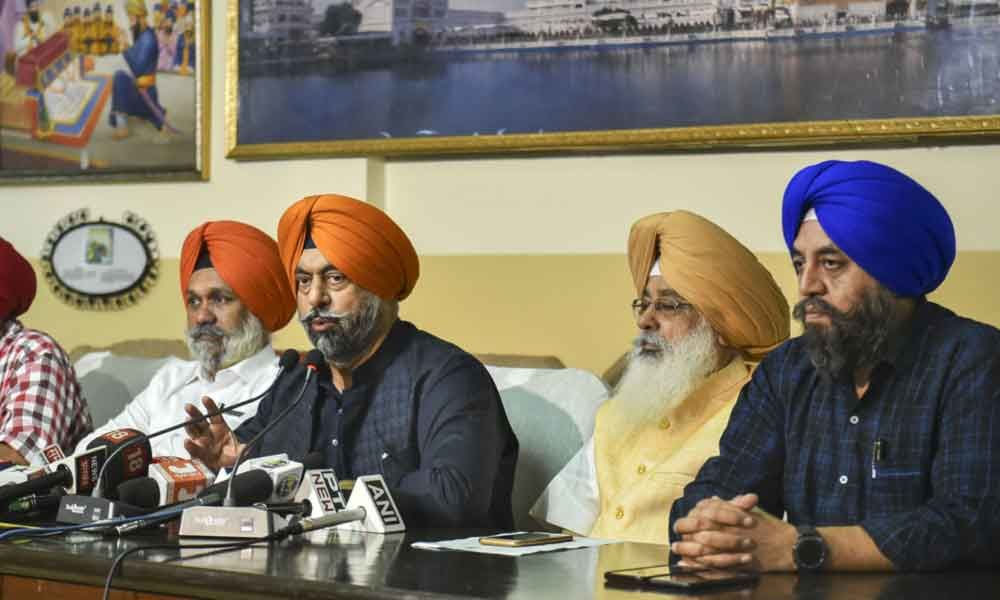 DSGMC general secretary S Harmeet Singh Kalka with other members during a press conference regarding the plan to take out a grand 'Nagar Kirtan' procession from the city to Nankana Sahib (in Pakistan), the birth place of Guru Nanak Dev, on the occasion of the 550th birth anniversary of the Sikhism founder, in New Delhi on Wednesday
Highlights

The Delhi Sikh Gurudwara Management Committee (DSGMC) on Wednesday said it has obtained all the necessary clearances to take out the grand 'Nagar...

New Delhi (PTI): The Delhi Sikh Gurudwara Management Committee (DSGMC) on Wednesday said it has obtained all the necessary clearances to take out the grand 'Nagar Kirtan' which is scheduled to start from the city and culminate at Nankana Sahib in Pakistan.

The DSGMC, however, said some elements are discrediting them by spreading misinformation. The 'Nagar Kirtan' procession marking the 550th birth anniversary of the founder of Sikkhism, Guru Nanak Dev will commence from Bangla Sahib Gurudwara here on October 13 and culminate at Nankana Sahib in Pakistan. "We have received all clearances from Home, External Affairs ministries, Customs and RBI regarding the Nagar Kirtan. Only visas are awaited. Yet some people are discrediting the DSGMC through misinformation," DSGMC secretary Harmeet Singh Kalka told reporters.

Kalka claimed that he was informed by the Pakistan High Commission that visa applications of 478 participants were sent for clearance to Islamabad. He said a video was released by some Sikh leaders from Pakistan saying DSGMC has no right to take out the 'Nagar Kirtan'. Another outfit Siromani Akali Dal Delhi (Sarna) has also planned to take out a 'Nagar Kirtan' from Nanak Piao Gurudwara here to Nankana Sahib on October 28. The highest seat of Sikh religion Akal Takht has formed a five-member committee comprising representatives from both organisations to ensure that one 'Nagar Kirtan' is organised to mark Guru Nank Dev's 550th birth anniversary. Kalka added that the DSGMC is waiting for a final word from Akal Takht over the issue.

History Repeats: A Deadly Spanish Influenza Which shook the world in 1900s