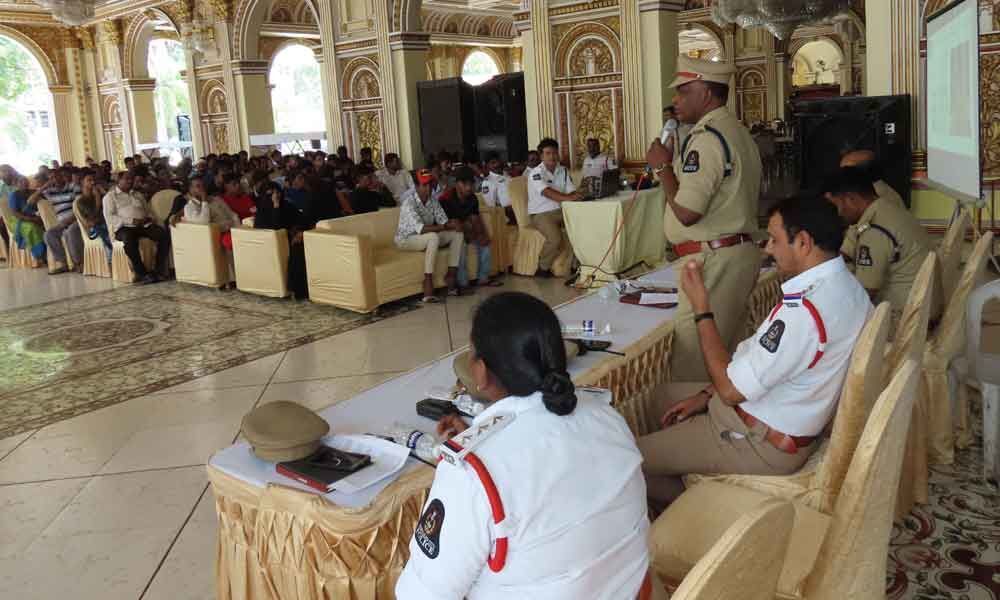 Traffic police on Wednesday conducted counselling to under-aged bikers and their parents to ensure their safety and others on the road. They were warned of initiating legal proceedings, if they found violating the norms once again in the future and let-off with an oath.

Nampally: Traffic police on Wednesday conducted counselling to under-aged bikers and their parents to ensure their safety and others on the road. They were warned of initiating legal proceedings, if they found violating the norms once again in the future and let-off with an oath.

Speaking to media persons, K Babu Rao, DCP, Traffic-II said that a special drive was conducted on Sunday and Monday under Goshamahal and Asif Nagar areas and caught of 170 boys who were under 18 years of age and were found to be driving vehicles. After taking them into custody, counselling was provided which was attended by them along with their parents at the Red Rose function hall in Nampally.

"Since these boys are under aged, they are not mature enough to handle the bike and may fail to control it and get confused when another vehicle from opposite direction comes.

There are other issues like identifying the speed-breakers, bad roads, potholes and reaction when encountered with an animal where these children may harm themselves. They would only get maturity after they turn 18 years of age. Then they can obtain a government licence issued by authorities and enjoy driving," he noted.

During the counselling, Babu Rao explained that the parents were asked not to provide bikes and should be held responsible for handing over keys to these kids. He said parents would face charges and visit court, counselling and even have to pay challan, if their children continue to drive like this.

Even the owner of the vehicle will be held responsible. "Amongst other issues, other violations including cell-phone driving, signal jumping, triple riding, helmetless driving were also explained to these people. The life is god's gift and should be cautious about the illegal activities and violations," he said.

Later, both parents and the youth were asked to take oath that they would not violate the norms. The Traffic DCP also said that as per their action plan, these types of drives would be continued to control the violations on the road.