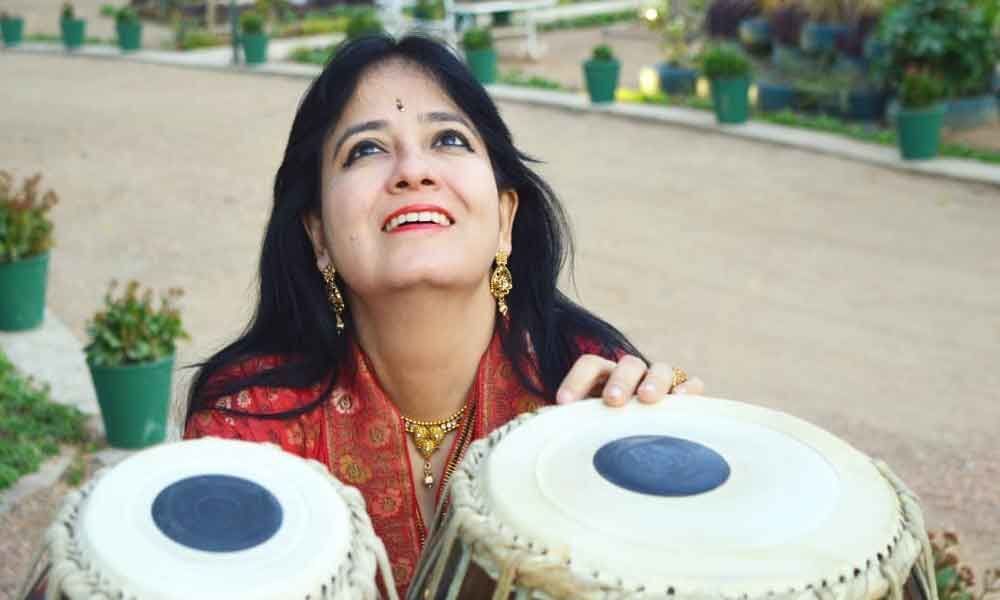 Anuradha Pal, tabla virtuoso, percussionist, composer and top-grade artiste of All India Radio is a trail blazer, who has received international recognition as the first professional female tabla player of the world.

Anuradha Pal, tabla virtuoso, percussionist, composer and top-grade artiste of All India Radio is a trail blazer, who has received international recognition as the first professional female tabla player of the world. The talented disciple of renowned maestros Alla Rakha and Zakir Hussain, began her eventful career at the age of ten storming what remains essentially a male bastion and carving a special niche for herself through sheer dedication and hard work.

Overcoming bias, patriarchal attitudes and obstacles that came her way because of lack of musical lineage, she has performed in major venues of the world with distinction. Recipient of many awards and much appreciation Anuradha's concert organized by INTACH at the Marigold hotel on Tuesday evening was a music connoisseur's delight. Supported on the keyboard by Tushar Raturi she had the Hyderabad audiences spell bound with a unique presentation called "Anuradha Pal in Jugalbandi With Herself".

Her virtuosity, creativity and innovation came to the fore in the jugalbandi introduced as a dialogue between her traditional and contemporary selves quite unlike the regular interaction between different artistes seen in its normal form. In this unusual dialogue, Anuradha interwove the traditional repertoire of all six gharanas with interactive stories from everyday life, our epics and mythology on two tablas.

This task was ably accomplished by her as she played one tabla in the normal style and the second one in the Pakhawaj style, with the corresponding Lehra accompaniment set to two different ragas. Raag Shankara representing the male cosmic energy (Purusha or Pakhwaj) and Raag Durga symbolizing the female energy (Prakruthi or tabla) complemented each other.

Her tabla spoke to audiences alternating between the traditional and contemporary approaches as she masterfully reproduced an argument between husband and wife, the agony of a traffic jam, a mother- daughter interaction from her own life, the gallop of a horse and the chugging sound of steam engine.

Throughout the concert Anuradha's ability to pack in power filled pieces alongside subtler sounds where the fingers moved ever so lightly to bring the required effect was greeted with applause. The last piece with the depiction of monsoon conveyed the effect of "bijuri chamke barsee megha' with the summer scorched atmosphere transformed in sync with the artiste's playing and body language reminding us of the beauty of April showers.

Obliging encore requests from the audiences, Anuradha Pal came up with a lively rendition of rock, jazz and Hollywood. The final piece that she played as a tribute to her legendary guru Ustad Alla Rakha in his centenary year was a special and complicated piece composed by him.

Explaining the technical nuances of this composition, she informed audiences that it took her three months to master this composition and receive her guru's appreciation when she first learnt it. In playing that piece, she ended the magical evening on a high note bringing to the fore her guru's unparalleled contribution to tabla and Indian music and her own eventful journey in his footsteps.'