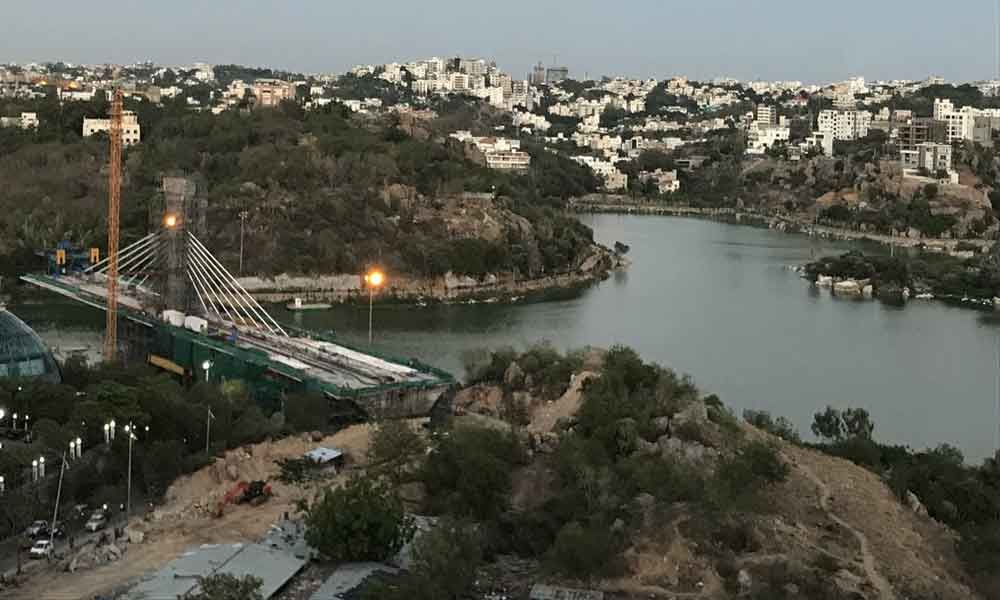 The Durgam Cheruvu Bridge is going to become a major tourist attraction and also ease traffic.

Hyderabad: The Durgam Cheruvu Bridge is going to become a major tourist attraction and also ease traffic. A cable stayed bridge across the picturesque Durgam Cheruvu is going to add to the attractions, says Ravi Bharghava, a software professional who works in Madhapur. If everything goes according to the plan, the bridge should be ready by October.

"There are around 26 cables that need to be installed on the bridge and now we are installing 9th cable and we are expecting it to be completed in the month of October," officials said. The Greater Hyderabad Municipal Corporation (GHMC) and L&T are involved in the project. People who traveling to the Mind space and financial district from Jubilee hills will get the alternative fast route.

The cable stayed bridge will ease traffic congestion on the roads leading to Jubilee Hills road number 36 and 45 and other stretches, which lead to Mind Space, Financial District and Gachibowli areas.

The sizes of the cables which are being used on the bridge varies from 23 meters to 104 meters and GHMC officials told The Hans India that cable bridge was equipped with a span of 233.8 meters long. The 754.38 meters cable bridge works are being taken up with a cost of Rs 184 Crore.

The cables being used for the bridge have been tested in a special lab at Germany for fatigue and have received approval. Recently, Arvind Kumar, Principal Secretary, Municipal Urban sector & Information & PR had a detailed review of the ongoing works with the concerned engineers and tweeted that there are implementation delays and hiccups and expect to complete by October.