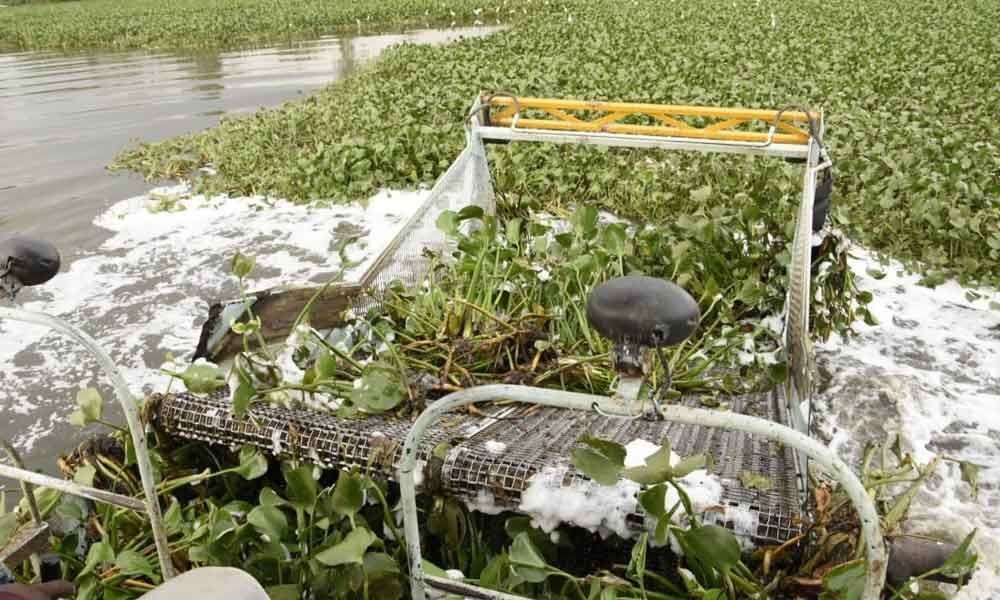 GHMC started clearing water hyacinth (Gurrepu Dekka) from two of the lakes, Langar Houz and Shah Hatim, which have become notorious for the breeding grounds of mosquitoes.

Karwan: GHMC started clearing water hyacinth (Gurrepu Dekka) from two of the lakes, Langar Houz and Shah Hatim, which have become notorious for the breeding grounds of mosquitoes.

Special equipment known as Hyacinth removing machines can be seen rolling over the entire length and breadth of the lake clearing of the weed, which has been growing in menacing proportions for the past several years.

Following a report, 'Langar Houz Lake brims with filth, garbage,' published on July 8 in The Hans India, the GHMC is believed to have taken up the works. While speaking to the newspaper, an official from engineering wing said that the GHMC has taken up the works in two different lakes in which water hyacinth has spread all over.

The two lakes, Langar Houz (HUDA) and Shah Hatim, both abutting Golconda are being cleared of the weed. This machine which costs about Rs 1.5 crore is being hired for Rs 12 lakh per month by the GHMC from a private firm based in Mumbai.

"Daily about an acre of this weed is being removed with the machinery, which is brought 'on hire' from Mumbai. The machine, made in Gujarat, has eased the way to remove weed, compared to earlier. After lake is cleared off of this weed, we shall be cleaning entirely of impurities by employing another technology in the next phase, just like we did for Neknampur Lake.

This will stop the growth of water hyacinth further," a higher official said. It may be mentioned here that local Congress leader, Osman Al-Hajri had raised the issue and demanded that GHMC take up this kind of initiative to remove entirely the water hyacinth from the lakes.

The leader had pointed out that the GHMC was availing services of high-tech equipment to remove the water hyacinth in other areas like Kukatpally. "When the Municipal authorities can use this machine (Hyacinth removing machine) to clean up the lakes, why not in the Karwan constituency, which has been facing the mosquito menace for years", he noted.

On Saturday, the Karwan MLA, Kausar Mohiuddin along with local corporators was seen examining the performance of the machine in the Langar Houz lake along with other locals.