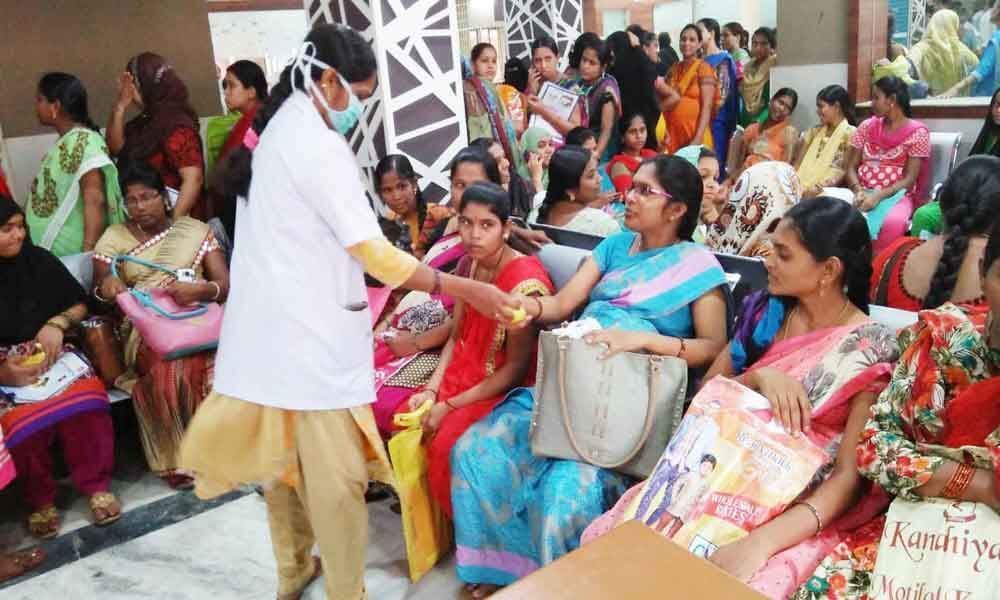 The state-run maternity hospital at Petla Burj, in collaboration with city-based NGO Helping Hand Foundation has been running an exclusive programme for the past one year on ‘Healthy eating during pregnancy,’ which is aimed at helping the expecting mothers improve their nutritional health during pregnancy.

Petla Burj: The state-run maternity hospital at Petla Burj, in collaboration with city-based NGO Helping Hand Foundation has been running an exclusive programme for the past one year on 'Healthy eating during pregnancy,' which is aimed at helping the expecting mothers improve their nutritional health during pregnancy.

In this unique program, perhaps the first in a public maternity hospital, about 150 to 200 pregnant women visiting the antenatal care in the state-run maternity hospital are being provided with healthy snacks & fruits every alternate day by the counsellors of Helping Hand Foundation.

Healthy fruits & snacks like bananas, dates and peanut chikkis are distributed to the expectant mothers, while they wait for their antenatal consultation.

The idea is not only just to distribute the healthy snacks, but also to inculcate the habit of healthy eating in expecting mothers during pregnancy, as they are counselled by the volunteers of HHF on the benefits of eating bananas, dates and other healthy snacks regularly during the course of their pregnancy.

The volunteers who are well versed in local languages go on to explain the expectant mothers about the benefits of fruit like how bananas are a rich source of folic acid, potassium and antioxidants, which are vital for the formation of bones and how dates are rich in iron, dietary fibre and how these elements can prevent potential birth defects by preventing anaemia in women.

Good counselling change the mindset of most women who come from weaker economic backgrounds and counselling them regularly encourage them to consciously eat healthy food. Good Nutrition during antenatal period is critical for expecting mothers and can potentially reduce the risk of congenital diseases in newborns and also reduce the nutritional deficiencies in newborns, said doctors associated with the program at the state-run facility.

It may be noted here that as per NHF Survey 2015, nearly 46% of women in Telangana State are found to be anaemic during pregnancy. The incidence of anaemia has been considerably reduced after the launch of this program at our hospital and this leads to the mothers bearing healthy offspring, said Dr M Nagamani, the Superintendent at Modern Government Maternity Hospital, Petla Burj.

"We are glad that a top public maternity hospital is running this program for pregnant women who mostly come from weaker sections. Such services are not provided in private settings where maternity services are available at high cost," said Mujtaba Hasan Askari, a member at Helping Hand foundation.

Encouraged by the good results at Modern Government Medical Hospital, HHF has now rolled out the "Healthy Eating for Pregnant Women" programme at the District Area Hospital in King Koti.