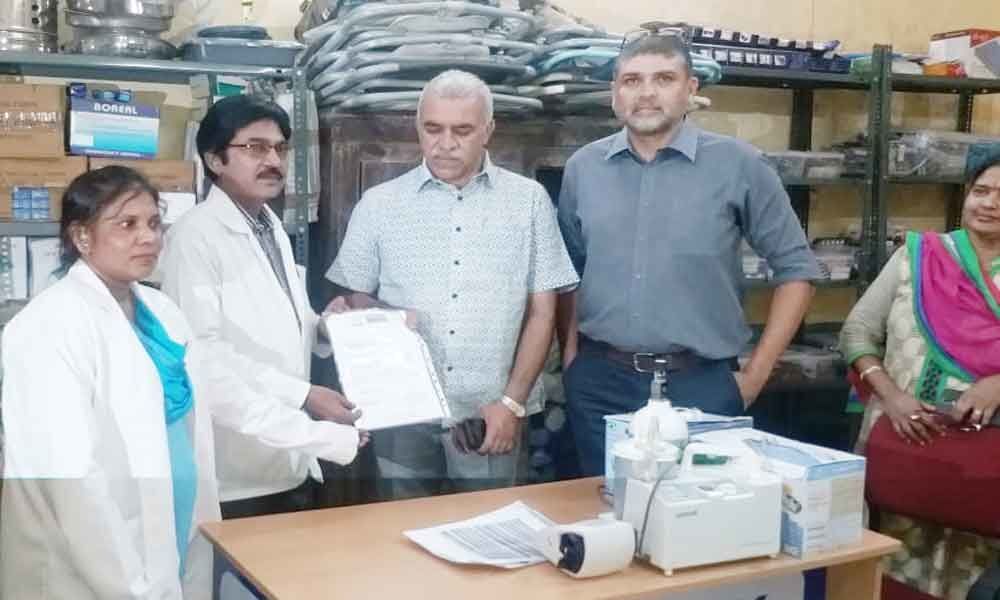 The State-run Government Nizamia General Hospital (GNGH) has got a boost from the family of VII Nizam, as his kin has come forward to donate medical devices, surgical items and medicines for the benefit of the hospital and needy patients.

Hyderabad: The State-run Government Nizamia General Hospital (GNGH) has got a boost from the family of VII Nizam, as his kin has come forward to donate medical devices, surgical items and medicines for the benefit of the hospital and needy patients.

The hospital authorities hope that the items which were donated by grandchildren of Mir Osman Ali Khan (the last Nizam) will help Nizamia ramp up the operation theatre to facilitate surgeries.

The donation was made by Mahmooda Nizami granddaughter of Nizam and her husband Dr Md Nizami of the Hazrath Nizamuddin Auliya Charitable Trust.

The grandson of Nizam Nawab Najaf Ali Khan, brother of Mahmooda who represented the family on the occasion said, "My family is very excited and keen to support NGOs like Helping Hand Foundation (HHF) that are genuinely working to help the poor patients in government hospitals."

He further added that he was moved by the fact that even today paralytic patients not only from rural Telangana and Andhra but from neighbouring states of Karnataka and Maharashtra also seek free treatment at this hospital and by supporting such patients a lot of good can be done.

According to Dr M A Vakeel, Superintendent of Hospital, the HHF has been working in Nizamia from November last year. It also donated a new surgical diathermy & goose neck LED spotlight for the OT to facilitate surgeries at the hospital. "Nizamia is now performing 8-10 general surgeries in the OT and also the maternal cases that require C Section are being performed at the OT," he said.

Several facilities in the state-run Unani hospital have improved after the hospital tied up with the NGO. Two sets of new bed sheets for 180 beds were provided, Lighting was improved, window panes and toilets were fixed, pharmacy and patient bedside stools and almairahs in pharmacy were painted. The grill door of the old heritage lift was repaired and new signages put up at the entrance by HHF.

Further, a 24x7 ambulance with driver is now kept at the disposal of the hospital. Many patients who require emergency medical management in stroke care are being provided quick transportation.

Earlier, it was a huge challenge to shift them to other medical centres in case of any need. ""HHF is also helping us with manpower to bridge the gap in patient care services and with the help of additional manpower in OPD and IP wards, patients are expressing satisfaction at the prompt services," said the Superintendent.

"We are very keen to partner with Nizamia to promote alternate and traditional medicine as this holds lot of promise, particularly in certain stroke-related disorders," says Mujtaba Hasan Askari of Helping Hand Foundation.