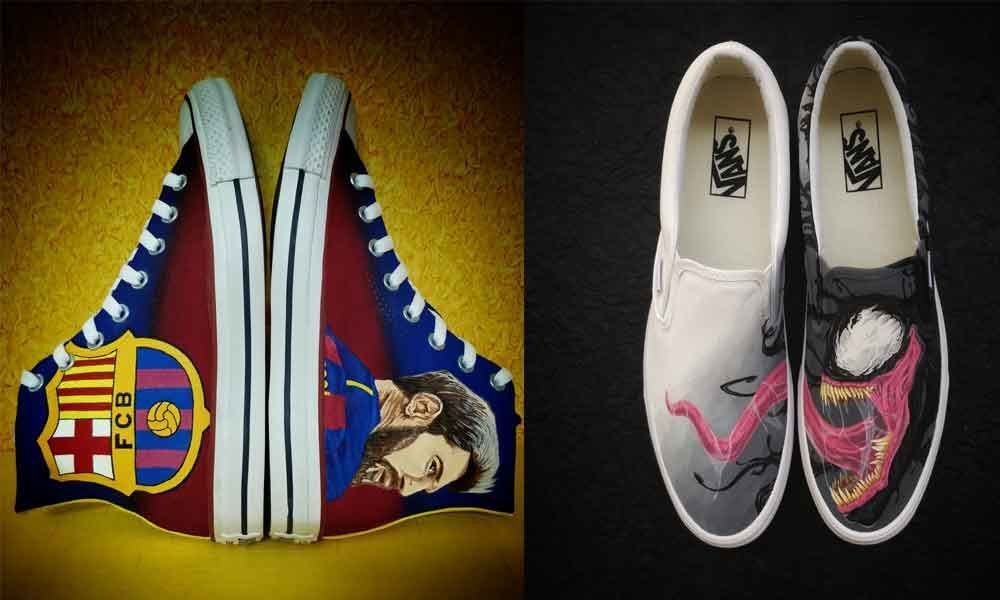 Being a fan of Chelseafootball team and sketching that always interested him was what truly encouraged this talented artist to do something innovative. Rahul Dev the artist known for his page 'Unhingedcustoms' has impressed a lot of people with art he does on shoes and makes them colourful for all his customers, who fall in love with them anyways.

Being a fan of Chelseafootball team and sketching that always interested him was what truly encouraged this talented artist to do something innovative. Rahul Dev the artist known for his page 'Unhingedcustoms' has impressed a lot of people with art he does on shoes and makes them colourful for all his customers, who fall in love with them anyways.

On asking how the idea began, he said, "When I was about seven-years-old, I was a huge fan of Chelsea and I could not afford the jersey and I wanted to get myself something related to the team. I had Converse shoes on which I painted the logo. Slowly,I started making them for friends who liked them. In 2016, one of my friends opened an Instagram page from where I could sell my painted shoes. In August 2017, I quit my job to do this full-time."

That said Rahul is not a professional artist, "I never painted until I tried it on my shoes; I had only sketched with crayons as I was afraid of mixing paints. I could never mix them properly. I have a bachelor's degree in Commerce, and I finished my CA Inter. I worked with few MNC's for four years, but I never felt it was my career path."

One can give him a theme and the shoes or let him pick the shoes, and he will come up with four to five designs according to the theme. The cost of the painted shoes starts from Rs 4000. "I use acrylic paints by Fevicril. I take 2 weeks to complete the order. I have been working on other paints also so that I can work on leather. I wanted to get into painting graffiti on walls and also paint accessories like leather bags, jackets, etc."

Painting anything and everything on shoes is his passion and pop culture is most in demand, he mentions. "People are mostly into Batman, and other cartoons and animated stuff. Right now, I am working on 'Game of Thrones' themed shoes, which I am doing for myself. If people like it, then they can place an order."

To quit a job and steady income in order to pursue an enterprise did not come easy for him. "Convincing people at home was a task, it took me a while to convince my parents and now they are fine with it. If you have a job, letting go of that steady pay is very scary. It is difficult to get out of that zone. I think when I quit my job, August and September were great and in the month of November there were zero orders and in December I had a lot of orders. There were times when I wondered if this the right thing to do, but I had to stick to it."

Today, his orders come from across India and abroad, "I have been getting orders from Indians who have settled abroad. I also had this one order from an American."

His next aim would be to get into Comic Con, Lable Bazar and flea markets, in addition to the online promotion.