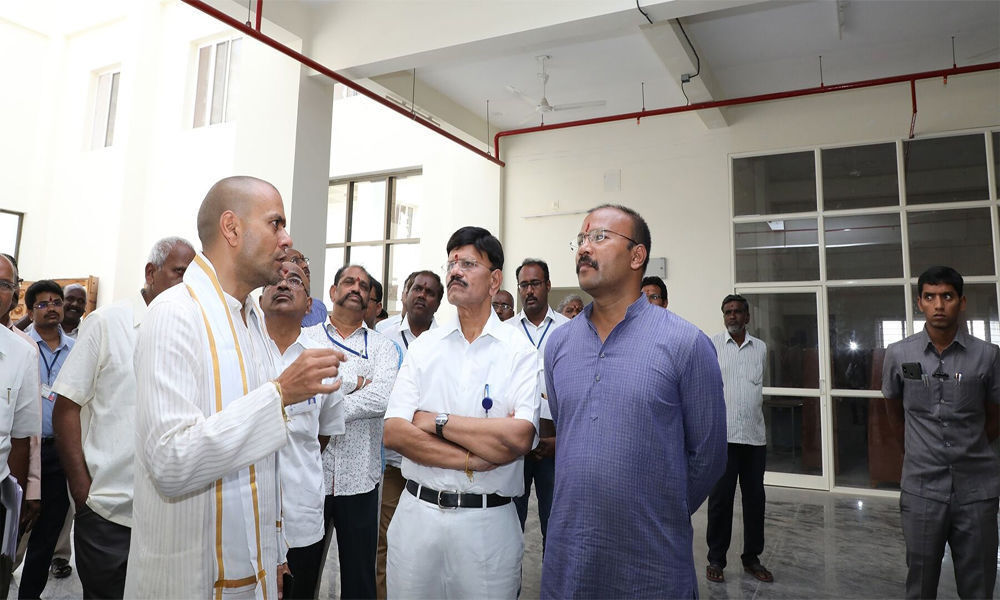 The TTD is contemplating to develop devotee facilities at Tiruchanur on the lines of Tirumala to cope with the growing number of pilgrims, said Executive Officer Anil Kumar Singhal.

Tiruchanur: The TTD is contemplating to develop devotee facilities at Tiruchanur on the lines of Tirumala to cope with the growing number of pilgrims, said Executive Officer Anil Kumar Singhal.

Speaking to the media after inspecting the Tiruchanur temple along with Tirupati JEO B Lakshmikantham and CVSO Gopinath Jatti on Wednesday, he said adequate facilities were created at Tiruchanur temple in the recent times which is attracting daily 30,000 devotees at present.

Arrangements were made to remove grills at both Sri Padmavathi Ammavari Temple and Sri Govindaraja Swamy Temple so that devotees could get good darshan and divine elixir of deities and enjoy the architectural beauty of historic temples.

The EO said repair of Ratham at Tiruchanur was taken up and the store room in the temple shifted to the Anna Prasadam Bhavan and the space used as waiting hall for devotees. He said officials have been instructed to build a covered pathway on the road from temple to new Anna Prasadam Complex in the Tholappa Gardens. The EO also inspected the temple Potu, old Anna Prasadam Complex, footwear counters and others. Steps taken for a chappal stand, mobile deposit counter and a bookstall, all under one roof, he said.