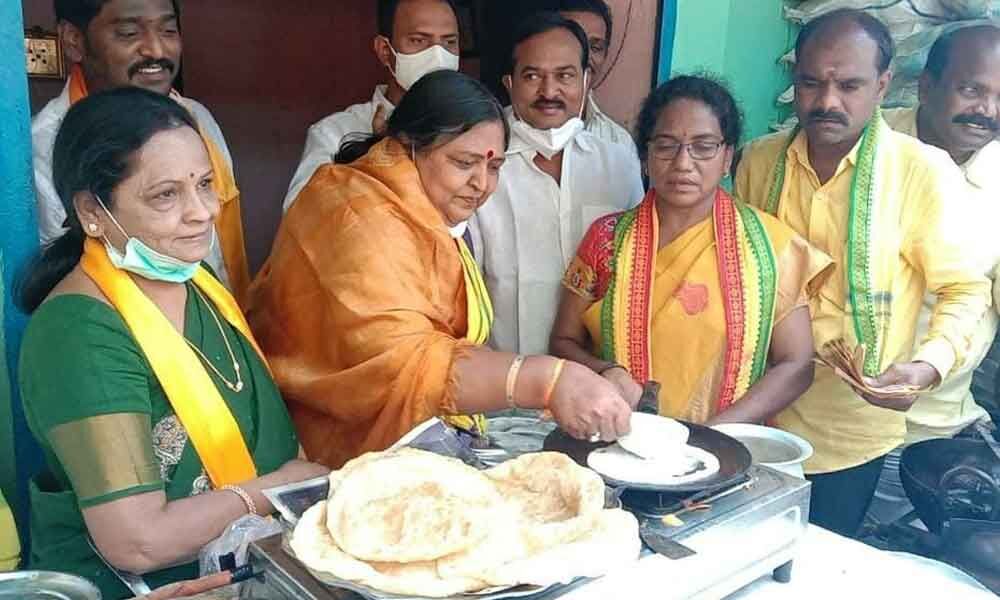 TDP nominee contesting for Tirupati Lok Sabha byelection Panabaka Lakshmi said that she would do her best to see the much-awaited international flight services start from Tirupati airport, if she is elected in the byelection.

Tirupati: TDP nominee contesting for Tirupati Lok Sabha byelection Panabaka Lakshmi said that she would do her best to see the much-awaited international flight services start from Tirupati airport, if she is elected in the byelection. Speaking at a 'Meet the press' event here on Wednesday, Lakshmi said that though the works for developing the Tirupati airport as an international airport was completed few years back, the commencement of international airport is being delayed for one reason or other and affirmed that she will take up the issue on priority basis for commencement of international flight services from Tirupati airport as early as possible. This would help to accelerate the growth of Tirupati due to direct air link, she said. The TDP leader said the completion of Garuda Varadhi, the 6 km long Rs 624 crore elevated Express way is getting delayed due to paucity of funds and assured to speed up the works to make the elevated express way ready to ease traffic congestion in the pilgrim city.

The Garuda Varadhi works were taken up in 2019 as part of the 'Smart city project' and was scheduled to be completed in two years i.e. by December 2020.

The TTD at the behest of the then Chief Minister N Chandrababu Naidu agreed to bear two-third of the expenditure while the remaining by the Municipal Corporation of Tirupati (MCT) to ensure time bound completion of project that would help the pilgrims coming from outside directly reach Alipiri foot of the hills, avoiding the city, saving time and easing traffic congestion in the city. But the TTD last year allocated only Rs 50 crore and this year again Rs 50 crore against it share of more than Rs 400 crore leaving the MCT high and dry. In this connection, Lakshmi said that late Y S Rajasekhar Reddy after coming to power continued the development works of previous TDP regime in the interests of people but the present government is not so hinting that the delay in completion of the much needed Varadhi works is vindictive politics.

She also assured that locals get 75 per cent reservation in the employment in the industries located in Sri City SEZ where the locals are now getting only menial jobs i.e. lower rung as the outsiders cornering the much fetching posts. The TDP candidate also assured to revive the multi-crore Mannavaram project to boost up employment in the backward region and construction of Dugarajapatnam port for the development of Nellore and Chittoor districts. Ex-MLA M Suguna, party leaders were present.