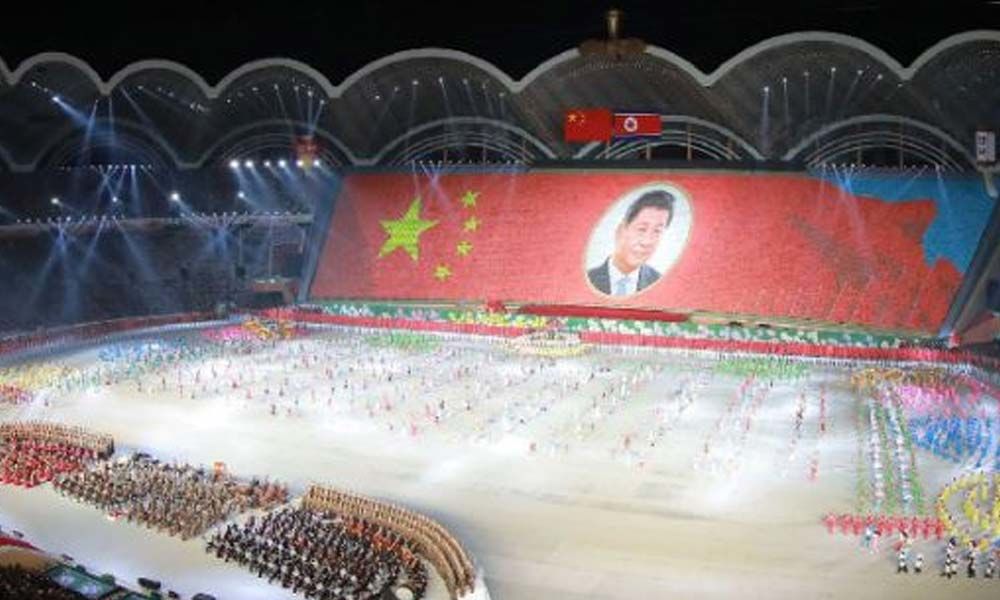 Xi Jinping has loomed large over China since becoming president, with a huge personality cult growing around his leadership, but in Pyongyang he looked bigger than usual when a giant portrait was unveiled at a propaganda event.

Pyongyang: Xi Jinping has loomed large over China since becoming president, with a huge personality cult growing around his leadership, but in Pyongyang he looked bigger than usual when a giant portrait was unveiled at a propaganda event.

The Chinese president, who is making the first trip by a Chinese head of state to North Korea in 14 years, was treated to a special performance of the spectacular "Mass Games" by his host Kim Jong Un. It is a show that could only be mounted by a country as single-minded as the North -- Guinness World Records lists a 2007 performance as the world's largest gymnastic display, with 100,090 participants. Months in the preparation, the Mass Games feature tens of thousands of people in synchronised displays enacting scenes from Korean history and modern life.

Behind them, around 15,000 children turn the coloured pages of books in sequence to create an ever-changing backdrop of giant images rippling across one side of the cavernous May Day stadium -- an analogue version, on a giant scale, of a usually digital solution. At one point during Thursday's performance -- a special version called "Invincible Socialism" -- the backdrop displayed a portrait of Xi against a Chinese flag, pictures on the website of the Rodong Sinmun, the official mouthpiece of the North's ruling party, showed.

Another image displayed a slogan in Chinese: "Long live the unbreakable friendship and unity between the two peoples of DPRK and China." DPRK is the abbreviation of North Korea's official name. Songs included "New China cannot exist without the communist party", "I love you China" and "Red flag is fluttering". Xi has consolidated power to become China's most powerful leader since Mao Zedong, with the communist party's propaganda machine building a cult of personality around the president. His face or name dominate the front pages of the newspapers every day, and his agenda leads every evening news programme.

Souvenir shops sell trinkets bearing his image and government workers have been encouraged to download an app dedicated to him that rewards users with points for the time they spend reading his speeches, watching videos of him and taking quizzes about the general secretary of the Communist Party. For its part, the North lionises Kim and his predecessors -- his authority derives from his status as the third generation of his family to rule. Portraits of his grandfather Kim Il Sung -- the founder of the Democratic People's Republic of Korea -- and father Kim Jong Il are ubiquitous, found in every office, workplace, schoolroom and home in the country.

But portraits of Kim Jong Un himself are a rarity -- it was notable that one was displayed at Pyongyang airport alongside Xi's when the visitor arrived, with both images again hanging above the rostrum where the two men watched the display. When the Mass Games began their 2019 run with a show titled "The Land of the People", the backdrop display included a portrait of Kim. Afterwards "he called creators of the performance and seriously criticised them for their wrong spirit of creation and irresponsible work attitude", lecturing them on "correctly implementing the revolutionary policy of our Party on literature and art", the North's official KCNA news agency reported, and performances were later suspended.

The North has never been explicit about what infuriated Kim, and it was not clear whether the backdrop showed any portraits of him on Thursday -- but no such images were included in the pictures on the Rodong Sinmun website.