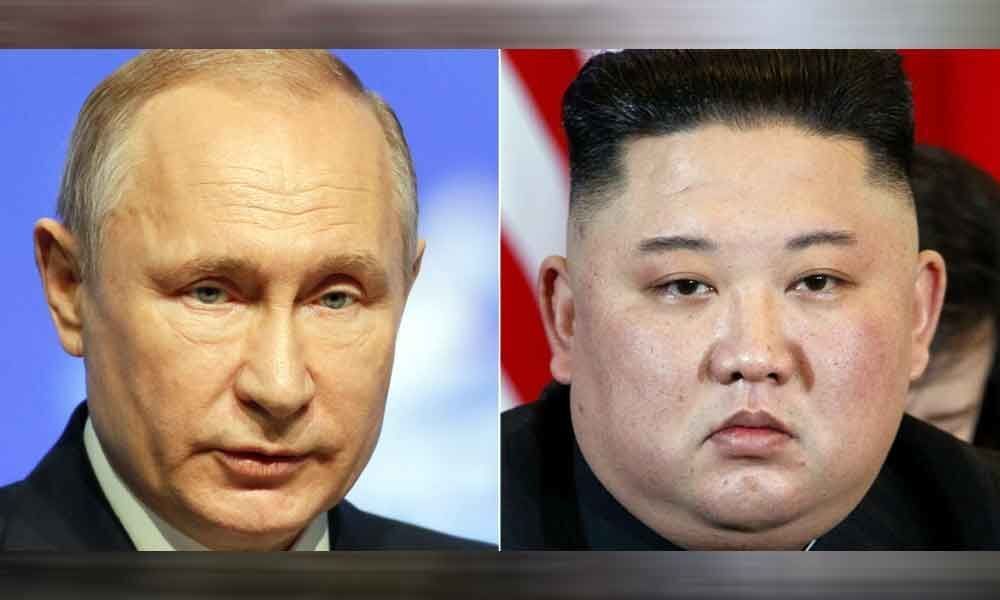 Russia said that the focus will be on a political and diplomatic solution to the nuclear problem on the Korean Peninsula.

VLADIVOSTOK: North Korean leader Kim Jong Un crossed the border into Russia on Wednesday for a first summit with Vladimir Putin, as Pyongyang seeks closer ties with its traditional ally amid a nuclear deadlock with the United States.

The meeting on Thursday in the Pacific coast city of Vladivostok will be Kim's first face-to-face talks with another head of state since returning from talks with US President Donald Trump in Hanoi that collapsed in February.

Earlier the North's official Korean Central News Agency (KCNA) reported his departure by train, naming among his entourage foreign minister Ri Yong Ho -- who told journalists after the summit in Vietnam that the country's stance would "never change".

Kim's private armoured train crossed the Tumen river Wednesday and arrived in the Russian border town of Khasan, Russian media reports said, where women in folk costumes welcomed him with bread and salt in a traditional greeting.

Kim's predecessors as leader, his father and grandfather, also stopped there on their trips, and at the station a small wooden building known as the House of Kim Il Sung commemorates Russian-Korean friendship.

Russian and North Korean flags were already flying on lamp posts Tuesday on Vladivostok's Russky island, where the summit is expected to take place at a university campus. The talks follow repeated invitations from Putin since Kim embarked on his diplomatic overtures last year.

Since March 2018, the formerly reclusive North Korean leader has held four meetings with Chinese President Xi Jinping, three with the South's Moon Jae-in, two with Trump and one with Vietnam's president.

Analysts say he is now looking for wider international support in his standoff with Washington. At the same time, Western diplomats say that with Moscow's global role a shadow of what it once was, Russian foreign policy is driven by the "search for relevance".

In Hanoi, the cash-strapped North demanded immediate relief from the sanctions imposed on it over its banned nuclear weapons and ballistic missile programmes, but the talks broke down in disagreement over what Pyongyang was prepared to give up in return.

North Korea last week launched a blistering attack on US Secretary of State Mike Pompeo, insisting he be removed from the negotiations just hours after announcing it had carried out a new weapons test. Moscow has already called for the sanctions to be eased, while the US has accused it of trying to help Pyongyang evade some of the measures - accusations Russia denies.

Kremlin foreign policy aide Yuri Ushakov told a briefing on Tuesday, "The focus will be on a political and diplomatic solution to the nuclear problem on the Korean Peninsula. Russia intends to help consolidate positive trends in every way,". He added that no joint statement or signing of agreements was planned.

KCNA did not mention whether Kim's wife Ri Sol Ju or his sister and close aide Kim Yo Jong were accompanying him. Moscow was a crucial backer of Pyongyang for decades and their ties go back to the founding of North Korea, when the Soviet Union installed Kim's grandfather Kim Il Sung as leader.

But their relations have often shifted between hot and cold and during the Cold War, Kim Il Sung was adept at exploiting the Communist rivalry between Beijing and Moscow to extract concessions from both. The Soviet Union reduced funding to the North as it began to seek reconciliation with Seoul in the 1980s, but Pyongyang was hit hard by its demise in 1991.

Soon after his first election as Russian president, Putin sought to normalise relations and met Kim Jong Il - the current leader's father and predecessor -- three times, the first of those meetings in Pyongyang in 2000, when he became the first Russian leader to visit the North.

China has since cemented its role as the isolated North's most important ally, its largest trading partner and crucial fuel supplier, and analysts say Kim could be looking to balance Beijing's influence. "It's part of the North's Juche - self-reliance -- ideology not to rely on a single ally. Pyongyang has a group of experts on diplomacy who have been in their post for decades. They'll know how to play the game if it ever becomes necessary for Pyongyang to play off its allies against each other," said Jeong Young-tae, an analyst at the Institute of North Korean Studies in Seoul.

While ties between Russia and the North have remained cordial, the last meeting between their leaders came in 2011, when Kim Jong Il told then-president Dmitry Medvedev that he was prepared to renounce nuclear testing.

His son has since overseen by far the country's most powerful blast to date, and the launch of missiles capable of reaching the entire US mainland.