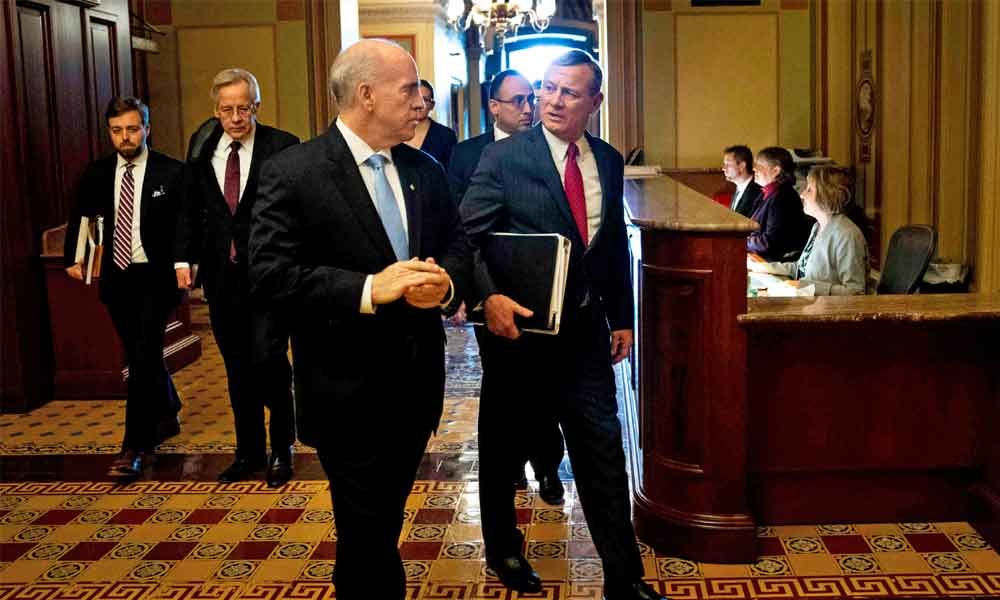 US Supreme Court Chief Justice John Roberts has taken charge of the Senate as it geared up for the historic impeachment trial of President Donald...

New York: US Supreme Court Chief Justice John Roberts has taken charge of the Senate as it geared up for the historic impeachment trial of President Donald Trump as new details emerged around the Ukraine controversies at the core of charges against him.

With his hand on a Bible, Roberts was sworn in Thursday as the temporary Senate President to oversee the trial and soon afterwards he gave the oath office to 99 of the 100 senators, who will act as jurors. One was missing because of a family medical problem.

This will only be the third time that a US President is on trial before the Senate after being impeached by the House of Representatives.

Flanked by fellow prosecutors from the House, Adam Schiff, the House Intelligence Committee Chair who led the impeachment investigations against Trump, formally read the charges of obstruction of Congress and abuse of power before the Senate.

Typing in all capital letters, Trump tweeted: "I JUST GOT IMPEACHED FOR MAKING A PERFECT PHONE CALL." But he may not have to worry beyond the blemish of impeachment to his name as he can expect to be acquitted of the charges because the Democrats will not be able to muster the two-thirds majority needed to convict him and remove him from office.

The two Presidents before him to be tainted by impeachment - Andrew Johnson in 1868 and Bill Clinton in 1998 - were acquitted.

The trial will be a television spectacle that could last about a month and the Democrats hope it will convince some of Trump's supporters to turn against him at the polls in November.

The call Trump was referring to is at the heart of the charges against him. It was made last July to the newly-elected Ukraine President Volodymyr Zelensky and during the call he asked him as a "favour" to investigate the dealings of the former Vice President Joe Biden and his son, Hunter in that country.

Democrats accuse Trump of abusing his powers by asking Zelensky to investigate Joe Biden, the party's front-runner for the nomination to challenge him in the November 3 presidential election, which would amount to inviting foreign interference in US polls.

He is also accused of withholding about $400 million in military aid to Ukraine in a bid to force Zelentsky to launch the investigation. In the end, the aid was released and there was no Ukrainian probe of the Bidens.

While the ceremonial start of the trial was unfolding in the Senate, a former associate of Trump's personal lawyer Rudy Giuliani was providing Democrats and the media with what he said were new details and documents relating to the

According Lev Parnas, who has been charged with trying to illegally fund US politicians, Trump knew about various efforts by his associates to find embarrassing information about the Bidens and others.

Chuck Schumer, the leader of the Democrats in the Senate, said that they may want to call him to testify at the trial, along with the other witnesses like former National Security Adviser John Bolton and Trump's acting chief of staff.