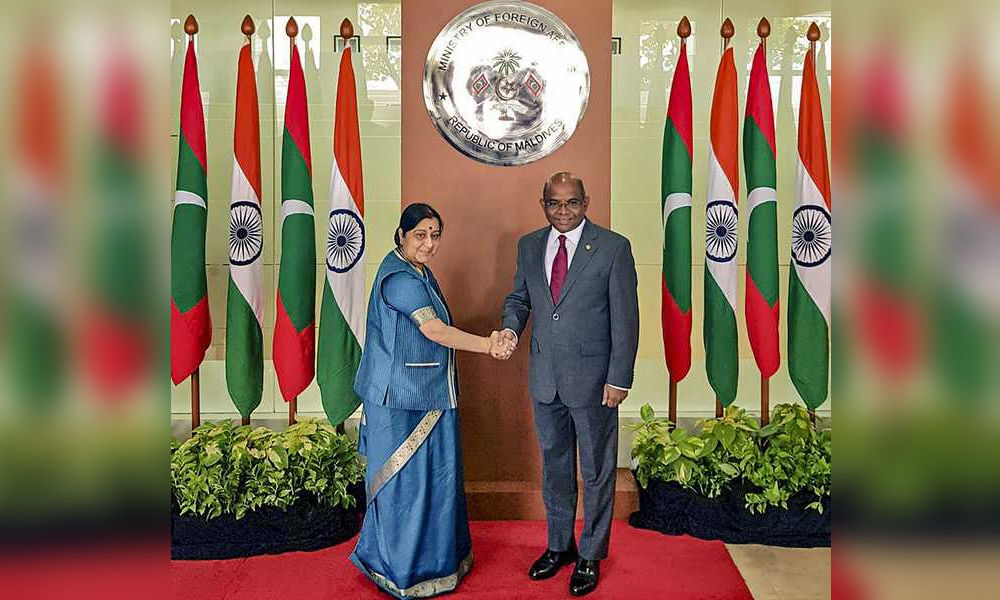 Swaraj arrived here on Sunday on a two-day visit, the first full-fledged bilateral trip from India to the island nation after the government of President Ibrahim Mohamed Solih came to power in November last year. Swaraj held talks with her Maldivian counterpart Abdulla Shahid on the first day of the visit.

"Good meeting between EAM @SushmaSwaraj and Maldives Minister of Home Affairs @ShimranAb on the second day of her visit to Maldives. Discussed steps to continue the upward trajectory in our bilateral relationship," External Affairs Ministry spokesperson Raveesh Kumar tweeted.

Swaraj will also call on President Solih on Monday. Foreign Secretary Vijay Gokhale and a number of senior officials are accompanying Swaraj during the trip. Officials said it will be the first full-fledged bilateral visit at the political level from India to the Maldives after the new government assumed office.

They said Prime Minister Narendra Modi visited the Maldives in November only to attend Solih's swearing-in ceremony and no substantive discussion had taken place then. Sources said the Maldives was aware of Indian government's limitations due to the election code of conduct and that Swaraj's visit will be to enhance overall ties which came under strain during the presidentship of Abdulla Yameen, who was known to be close to China.

Relations between India and the Maldives deteriorated after the then President Abdulla Yameen imposed emergency on February 5 last year. India had criticised his decision and asked his government to restore the credibility of the electoral and political process by releasing political prisoners.

The emergency lasted for 45 days. Solih became president in November after he defeated Yameen in presidential elections.