Trump leaves for maiden visit to India, says looking forward to be with people of India 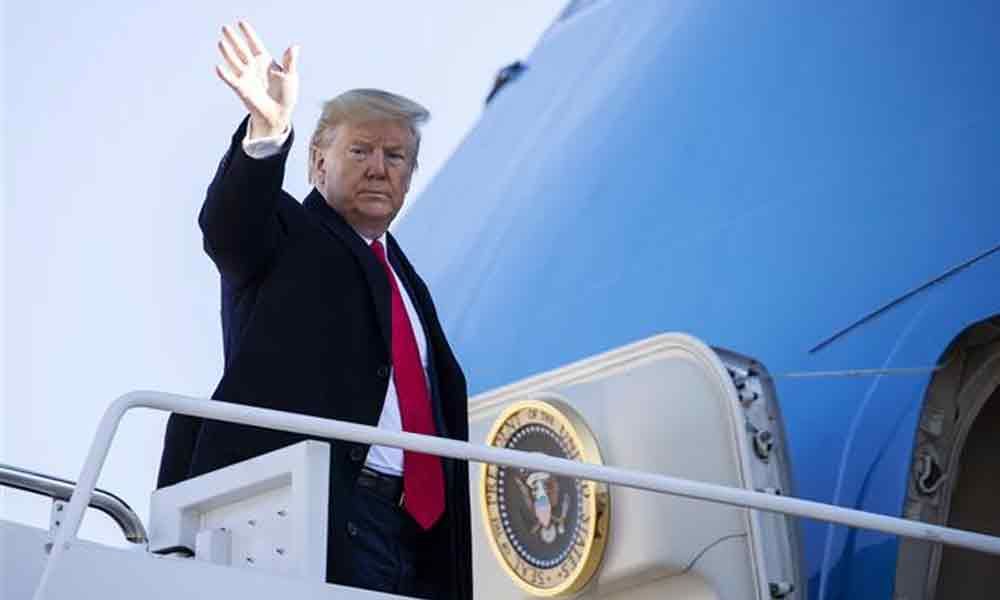 Just before his departure, Trump said he had committed to visit India long time back and he is looking forward to be with the people of India.

Looking forward to be with the people of India, US President Donald Trump on Sunday left for a historic visit to the country, which officials said will "demonstrate strong and enduring ties" between the two largest democracies of the world and significantly ramp up the defence and strategic ties.

Trump is accompanied by First Lady Melania, daughter Ivanka, son-in-law Jared Kushner and the top brass of his administration.

Just before his departure, Trump said he had committed to visit India long time back and he is looking forward to be with the people of India.

"I look forward to being with the people of India. We are going to have many millions and millions of people. It's a long trip. I get along very well with Prime Minister (Narendra) Modi. He is a friend of mine," Trump told reporters outside the White House.

Trump's maiden visit to India is expected to significantly ramp up bilateral defence and strategic ties but unlikely to produce tangible outcome in resolving thorny issues like trade tariffs.

The nearly 36-hour-long visit by Trump is also set to send across a clear message of growing congruence of interests on major geopolitical developments in the region and beyond, particularly when China has been expanding its military might and economic clout.

"We are wheels up for India, where @realDonaldTrump & @FLOTUS have a full agenda building upon our many shared values and strategic/economic interests. Looking forward to a trip meant to further demonstrate the strong and enduring ties between our two countries!" the White House tweeted.

We are wheels up for India, where @realDonaldTrump & @FLOTUS have a full agenda building upon our many shared values & strategic/economic interests. Looking forward to a trip meant to further demonstrate the strong & enduring ties between our two countries! 🇺🇸🇮🇳 #NamasteTrump

Trump will have a brief re-fuel stopover in Germany en-route to India.

Trump, who is seeking re-election in the US presidential elections in November, will arrive on Monday around noon in Ahmedabad in Prime Minister Modi's home state of Gujarat.

Prime Minister Modi is expected to receive Trump at the airport.

Hundreds of thousands of people are expected to greet Trump in a massive roadshow in Ahmedabad before he arrives at the newly-built Motera cricket stadium, which has a capacity of over 1,00,000 people, for the 'Namaste Trump' event.

'Namaste Trump' will be similar to the landmark 'Howdy, Modi!' event hosted by the Indian-American community in honour of Prime Minister Modi during his visit to Houston in September 2019.

From Ahmedabad, the US president will travel to Agra to have a glimpse of the iconic Taj Mahal. The Trump family will spend about an hour at the Taj Mahal before sunset. Then they will leave for Delhi for the main leg of the visit.

On the morning of February 25, Trump and the First Lady would be accorded a ceremonial welcome at the forecourt of the Rashtrapati Bhavan.

From there, they would go to Rajghat to pay homage at the 'samadhi' of Mahatma Gandhi.

It would be followed by restricted and delegation-level talks between Trump and Modi at Hyderabad House. Prime Minister Modi would host a lunch for the US president following the bilateral talks.

In the afternoon, Trump is expected to attend certain private events at the US Embassy, including a roundtable with industry representatives.

In the evening, the US president will meet President Ram Nath Kovind at the Rashtrapati Bhavan.

A banquet will be hosted by Kovind. President Trump would depart from India later that evening.

In their talks on Tuesday, Trump and Prime Minister Modi are likely to focus on a wide variety of bilateral and regional issues including trade and investment, defence and security, counter-terrorism, energy security, religious freedom, proposed peace deal with Taliban in Afghanistan and situation in the Indo-Pacific, according to Indian and US officials.

Trump's visit to India comes at a time when the country has been witnessing wide-spread protests against a new citizenship law and strain in New Delhi's ties with Islamabad over the Kashmir issue.

Senior advisors to the President Stephen Miller, Dan Scavino, Chief of Staff to the First Lady Lindsay Reynolds, Assistant to the President and Special Representative for International Telecommunication Policy and Senior Advisor to the Chief of Staff Robert Blair, and White House Press Secretary Stephanie Grisham are the other members of the delegation.

United States Ambassador to India Ken Juster is also part of the delegation.