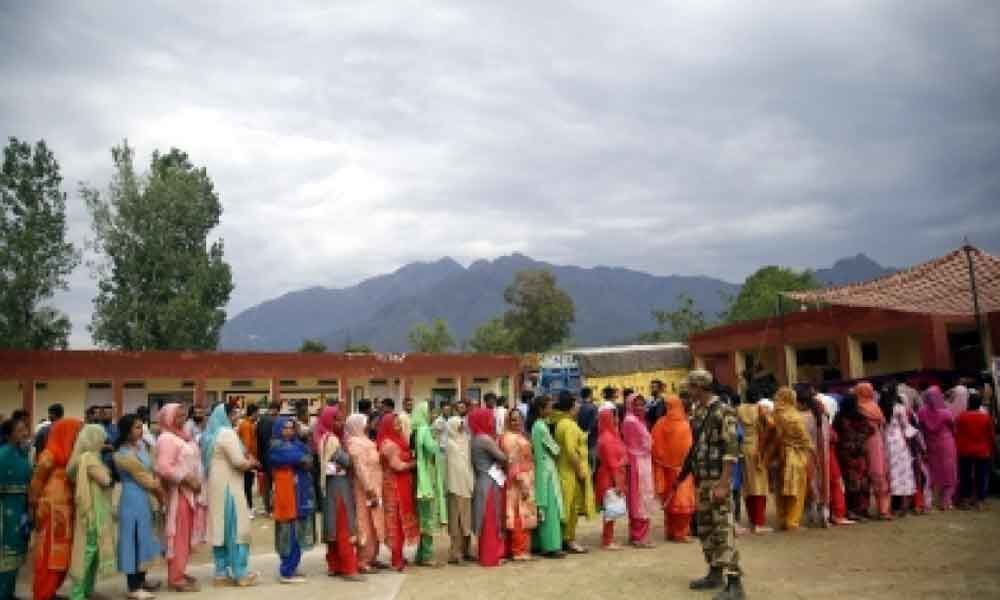 Except for some incidents of clashes between stone pelters and security forces, the Lok Sabha election ended peacefully in the Srinagar Lok Sabha seat on Thursday while eliciting overwhelming voter turnout in the Udhampur constituency.

Jammu/Srinagar: Except for some incidents of clashes between stone pelters and security forces, the Lok Sabha election ended peacefully in the Srinagar Lok Sabha seat on Thursday while eliciting overwhelming voter turnout in the Udhampur constituency.

Clashes broke out between security forces and stone pelters who tried to disrupt the voting process in Batmaloo area of Srinagar city, Pandach area of Ganderbal district and at four other places in Badgam district in the Srinagar seat, officials said.

One civilian and four policemen, including two officers, were injured in these clashes but the security forces said they exercised maximum restraint to ensure that the violence did not overshadow the voting in Srinagar.

In a 2017 by-election in Srinagar, seven people were killed in clashes between the security forces and unruly mobs while just 7.14 per cent people voted.

"In contrast, the poll process has generally remained peaceful in Srinagar constituency and nearly 15 per cent voters came out to exercise their democratic rights," an official said.

In the Udhampur Lok Sabha seat, however, the voter turnout was overwhelming with over 65 per cent votes polled.

The exact voting figures for the two constituencies would be announced by Chief Electoral Officer Shailendra Kumar.

There was a brisk over 32 per cent polling in the first five hours till 12 noon in Udhampur.

Most polling stations in the eight voting segments of Srinagar wore a deserted look although at some places voters came out in ones and twos.

Voter turnout was better in Kangan, Ganderbal, Beerwah, Khansahib, Charar-e-Sharief and Badgam voting segments although there was no visible enthusiasm among those who voted.

Securing polling stations, providing safe passage to voters and preventing militants from disrupting the elections were the main challenges faced in Srinagar constituency.

Separatists called for a boycott of the elections to highlight the Kashmir issue.

The senior Abdullah is mainly challenged by Syed Aga Mohsin of the Peoples Democratic Party and Irfan Raza Ansari of the Peoples Conference while there are nine other candidates too.

Jitendra Singh of the Bharatiya Janata Party (BJP) is seeking re-election from Udhampur. He is challenged mainly by Vikramaditya Singh of the Congress.