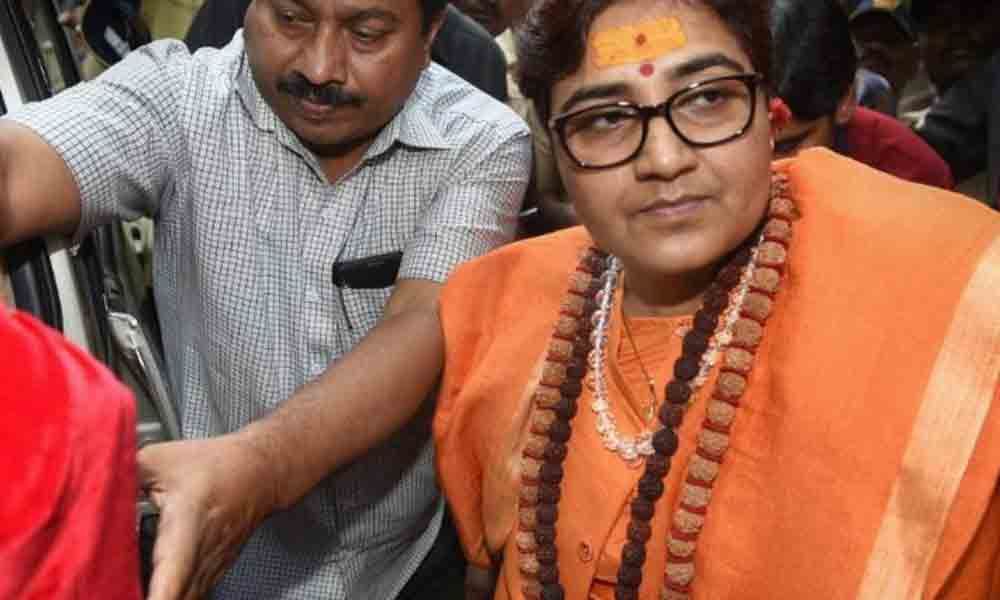 Sadhvi Pragya Singh Thakur, whose postures to avoid a personal appearance at the special NIA court made news in Bhopal, finally marked her presence at the Mumbai court on Friday.

Bhopal (IANS): Sadhvi Pragya Singh Thakur, whose postures to avoid a personal appearance at the special NIA court made news in Bhopal, finally marked her presence at the Mumbai court on Friday.

However, the Bharatiya Janata Party (BJP) MP from Bhopal played a dead bat when NIA Special Judge Vinod Padlakar asked her a couple of questions on the 2008 Malegaon blasts case, in which she is among the prime accused.

She could be seen helped by two of her aides to climb the stairs at the entrance of the special National Investigating Agency (NIA) court.

Six people were killed and another 100 were injured following blasts near a mosque in Malegaon in Nashik district on September 29, 2008.

Thakur, who skipped court proceedings on Thursday citing ill health, had attended a public function organised by the Rajput Samaj on Wednesday. That sent tongues wagging about the seriousness of her illness. She also refused to speak to the mediapersons in Bhopal.

On Friday, Thakur appeared before the special NIA court along with two other accused in the case. Besides the Bhopal MP, the other accused include Lt. Col. Prasad Purohit, Major (retired) Ramesh Upadhyay, Sudhakar Dwivedi, Ajay Rahirkar, Sameer Kulkarni and Sudhakar Chaturvedi.

The accused have been charged under various sections of the Unlawful Activities Prevention Act (UAPA) and the Indian Penal Code (IPC). The charges include Sections 16 (committing terrorist act) and 18 (conspiring to commit terrorist act) of the UAPA and Sections 120 (b) (criminal conspiracy), 302 (murder), 307 (attempt to murder), 324 (voluntarily causing hurt) and 153 (a) (promoting enmity between two religious groups) of the IPC.

The accused have also been charged under relevant sections of the Explosive Substances Act.

During the proceedings, Special Judge Padlakar asked the accused, "Do you know or has your lawyer told you about how many witnesses have been examined by the prosecution till now?"

To which, Thakur said that she didn't know while Diwedi answered that so far 116 witnesses have been examined by the prosecution.

The court also asked, "From all the witnesses who have been examined till now, it has transpired that there was a blast on September 29, 2008 in which several people died. What do you have to say?" While Thakur and Diwedi said that they did not know about it, Kulkarni claimed that it was true.

Thakur had earlier sought exemption from personal appearance following which she was told to appear before the special NIA court by June 7.

On Monday, the court had directed Thakur and the other accused to appear before it once a week. Special Judge Padalkar, while asking Thakur to be present before the court, had referred to a recent Supreme Court order which said that hearing in criminal cases against public representatives be expedited.