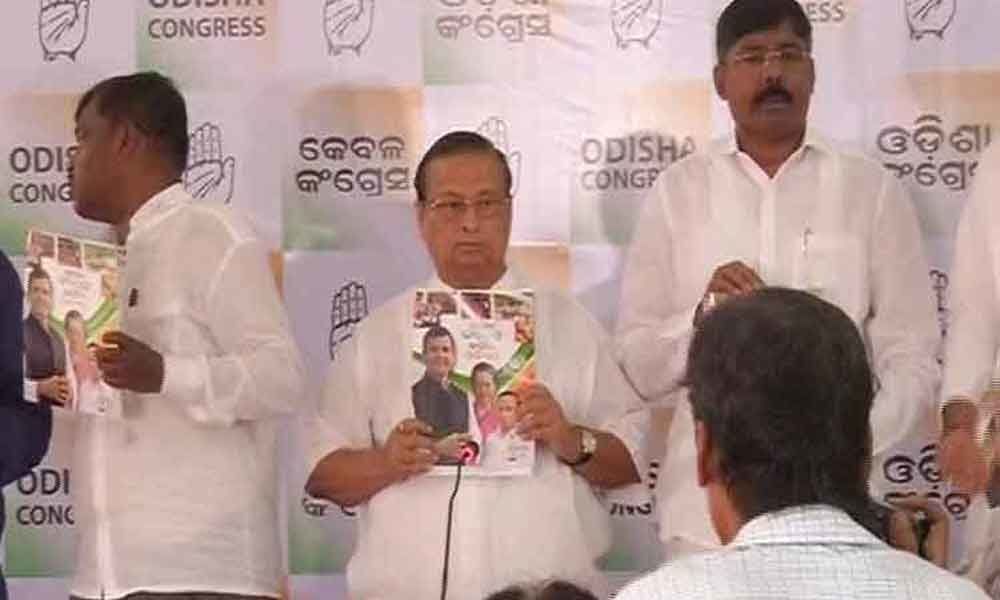 On women empowerment, the manifesto promised to enforce 33 per cent reservaton for them in central and state government jobs.

Bhubaneswar: Odisha Congress on Sunday released its manifesto for the upcoming polls making a slew of promises, including waiver of crop loans up to Rs 2 lakh per family and 33 per cent reservation for women in government jobs, parliament and assembly. With a focus on farmers, youth, women, tribals and dalits, the 32-page document titled "Your Voice Your Choice" also promised to give Rs 72,000 each to five crore poor families under the 'Nyay' scheme as announced by the AICC.

With Odisha going for simultaneous assembly election and Lok Sabha polls, the state unit of the party released the separate manifesto which promised concrete steps to address issues such as unemployment, farm distress, safety and empowerment of women besides uplift of tribals and dalits.

Releasing the manifesto in the presence of senior party leaders here, Odisha Pradesh Congress Committee (OPCC) president Niranjan Patnaik said, an assistance of Rs 6,000 per month under the NYAY scheme, would be transferred directly to the account of the woman of an eligible family.

Promising employment for all, the manifesto said one person in every family will have a job, either in the public or private sector, while the jobless will be entitled to an unemployment allowance of Rs 3,000 per month.

All contractual workers in the public sector will be regularised while there shall be no contractual employment in teaching, healthcare and social security services, the manifesto said. It also promised land to the landless and home to homeless. A five-year plan will be unveiled to provide homestead land to every landless family in a village and shelter for every urban homeless family. Noting that Congress is committed to give the farmers their due, the manifesto said crop loans up to Rs 2 lakh per family will be waived within the first 10 days if the party is voted to power, while loans repaid after March 31, 2018 would be reimbursed.

Announcing a minimun support price of Rs 2,600 per quintal for paddy, the manifesto said every farming family will get a special financial assistance of Rs 10,000 annually for the next three years.

There will be guaranteed remunerative price for all major farm and forest produce, it said. Access to irrigation, affordable electricity and seeds would be provided for all and farmers above the age of 60 years will get a monthly pension of Rs 1500.

On women empowerment, the manifesto promised to enforce 33 per cent reservaton for them in central and state government jobs in addition to a quota of 33 per cent in parliament and state assembly. Free education at all levels and financial assistance would be provided to needy families for their daughter's marriage, while Rs 2000 monthly pension will be given to widows and single women above 60 years of age, it said. It promised that Anganwadi workers would be taken on regular service with a higher pay of Rs 9,000 per month.

The Congress also promised to raise an incubation fund or Rs one crore in each block to support women entrepreneurs. On tribal welfare, the manifesto said all forest offence cases, except those involving criminal acts, will be withdrawan in the first 100 days of forming government, while management of forest resources will be vested with Gram Sabhas and PESA Act, 1996 will be implemented within 100 days ot the party forming government.

Voicing concern over the rising atrocities against dalits, the party said exclusive dalit protection cells and special courts will be formed to expedite cases of atrocities.

Manual scavanging will be abolished and landless dalits will get priority in land distribution and all reserved vacancies in government jobs will be filled within a year, the manifesto said.

The party manifesto said a comprehensive state education policy will be brought within a year and right to education will be extended up to Cloass 12, while allocation for education will be raised to at least 20 per cent of the budget.