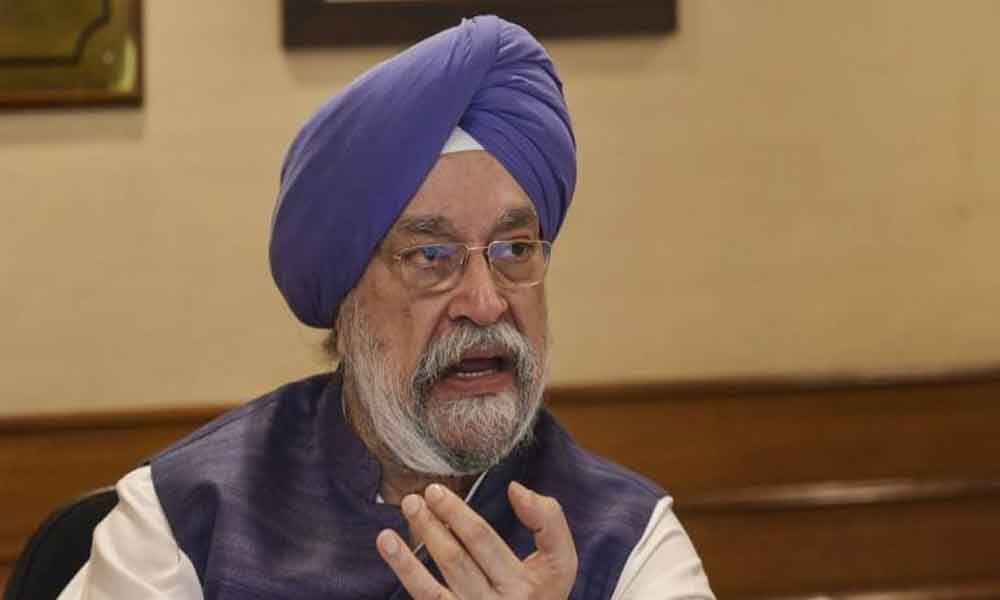 The government is committed to the disinvestment of national carrier Air India and the plan is to make it more operationally viable before disinvesting it, Civil Aviation Minister Hardeep Singh Puri told the Rajya Sabha Wednesday.

New Delhi: The government is committed to the disinvestment of national carrier Air India and the plan is to make it more operationally viable before disinvesting it, Civil Aviation Minister Hardeep Singh Puri told the Rajya Sabha Wednesday.

Replying to supplementaries during Question Hour, the minister said there has been a steady improvement in finances of Air India and the airline is set to make profit during the current financial year.

He said Air India is currently making revenue of Rs 15 crore every day.

"Our plan is to revive Air India, make it more operationally viable and then to disinvent it. So far as Air India is concerned, the government is committed to the privatisation of Air India. Let there be no ambiguity on that," he said.

Puri said the costing and overall calculations of an Airline depend on a large number of factors, including external factors like closure of Pakistan air space, but should end the current year in profit after which it will be disinvested.

"There has been a steady improvement in Air India's finances. It has been my expectations that in the current financial year, we are hoping to make a profit. But, the year that has concluded the figure shall show a loss," he said.

The Minister said in April, the airline has improved but there are certain external factors, like closure of airspace of Pakistan, that have affected its profitability.

"Our expectations is that in the coming months, in the current year, we will make a profit and turn Air India around and then privatise the airline," Puri said.

"It is customary for situations like this for employees and stakeholders in the process to put pressure on the government. We have increased the Air India profitability by 7 crore revenue per day. We are doing all that we can," he said.

The Civil Aviation minister also rejected as "motivated" certain news reports that the airline did not have enough finances and was unable to pay up salaries up to this October.

He said there is an overall debt of Rs 59,000 crore and there was a proposal to retire Rs 29,000 crore into a special purpose vehicle when an attempt was made to privatise Air India.

"Now when Air India's alternative mechanism is established, we will take a view on these.

"After all, Air India is a viable airline and it has some prized assets and when we go for disinvestment, we will also take care of this. But, the press report was motivated in order to put pressure on the government not to disinvest in Air India," he noted.

Air India by itself and many of its operational assets are very prized assets and the Nariman headquarters are a case in point, he said.

Responding to another query on rising airfares, the minister said the disruption or the uncertainty caused on account the cessation of operation of Jet Airways in so far as the domestic air travel is concerned has been almost completely corrected.

"In so far as the international airfares are concerned, we have for a three-month period allocated the slots to other domestic carriers.

Air India is incurring losses, but those losses are being incurred not because it is not a prized asset, it has some excellent assets and has a fleet of aircraft which travels to 80 destinations domestically and 40 internationally, he noted.

"But, it has over a period of time undertaken debt and that debt servicing is becoming unsustainable. We are incurring losses of Rs 15 crore a day and therefore Air India would have to be disinvested," he said.

Air India, the minister said, also had a shortage of 20 aircraft on account of certain cost-cutting measures which were undertaken. We are hoping to bring these 20 aircraft back into operation by October, at least 17 of them.

Air India has also been given many of the slots vacated by Jet Airways domestically and also for its low-cost carriers like Air India Express and Alliance Air, he added.