Opposition motive is to dump me: PM Modi 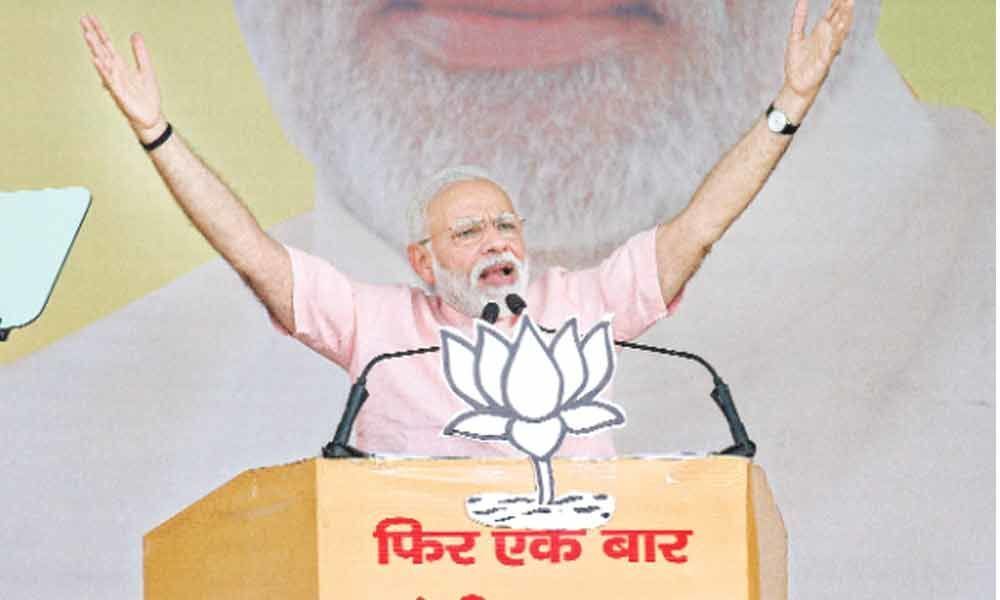 ‘Their agenda is to bring in dynastic politics’

Saharanpur (UP): Prime Minister Narendra Modi on Friday slammed the opposition parties alleging their only agenda was to dislodge him from power and promote dynastic politics. Addressing a rally in western Uttar Pradesh which goes to polls in the first phase on April 11, Modi targeted the Congress accusing it of being against the welfare of the backward classes and termed its poll manifesto a "dhakosla patra (sham document)".

"The opposition's only agenda is 'Modi hatao' (remove Modi). Their only intention is to promote 'vansvaad' (dynastic politics)," he said. The prime minister also accused RLD chief Ajit Singh of "forgetting" the atrocities against people and not "raising his voice for self-interest".

The Rashtriya Lok Dal is in alliance with the Samajwadi Party and the Bahujan Samaj Party in Uttar Pradesh.

Striking an emotional chord with the people of this region, Modi said, "Yogi government is taking caring of pending sugarcane dues and trying to ensure that in the future it did not happen." Raking up the triple talaq issue, the PM said, "My government tried to save Muslim women from triple talaq and make their lives safe, but the Congress and its allies do not want it done.

I want to tell Muslim daughters that in the SP, BSP and the Congress rule, exploitation of Muslim women will continue. "They will not allow law against triple talaq and will not let the ordinance we bought to pass," Modi said. "They (opposition) give threat of 'boti-boti' (cut into pieces) and we talk of honour of 'beti-beti' (daughter)," he said.

He was reminding people of Congress candidate Imran Masood's "boti-boti" remark in 2014 against him. "Here those who talk of 'boti-boti' are close to 'shehzade' (Rahul Gandhi), but we talk of security and honours of 'beti-beti' (daughters)," he said.