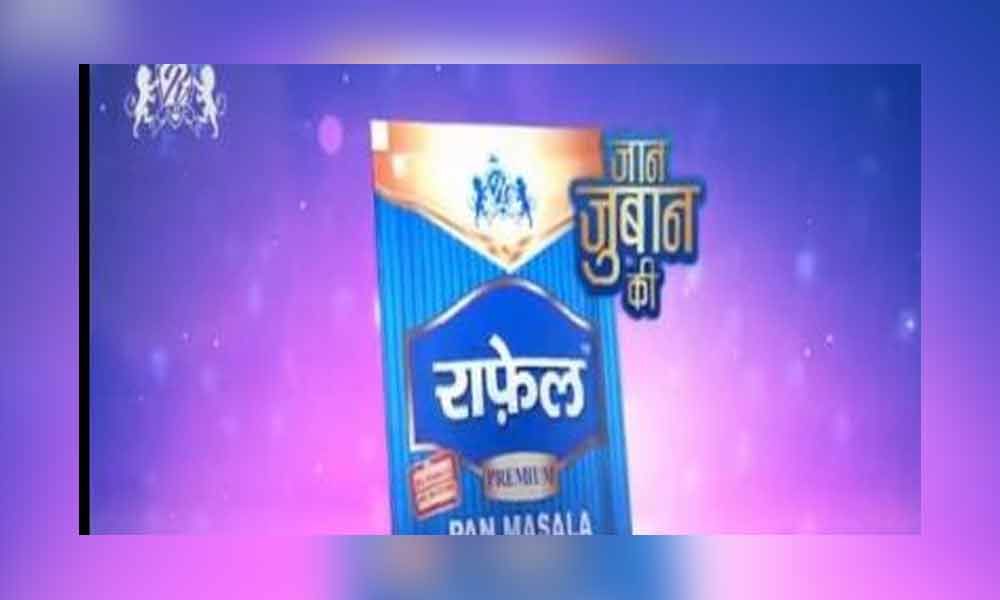 While India eagerly awaits the arrival of the first Rafale fighter jet, a 'Rafale pan masala' has landed in markets here, according to a video that has surfaced on social media.

Lucknow: While India eagerly awaits the arrival of the first Rafale fighter jet, a 'Rafale pan masala' has landed in markets here, according to a video that has surfaced on social media.

The 11-second animated video portrays two jets, soaring in the sky, manoeuvring and circling around a giant packet of the 'Rafale Pan Masala' packet. Also visible on the screen is the tagline 'Jan Juban Ki' in Hindi.

The video was shared widely on social media with some taking potshots at the tagline of the commercial while others pointed out the timing, just ahead of the Rafale handover ceremony in France where the first Rafale fighter jet was received by Union Home Minister Rajnath Singh.

Meanwhile, some users on the microblogging platform even went on to suggest that the pan-masala brand could go ahead and sue Dassault Aviation, the makers of Rafale, for copyright infringement.

R-AMP, the manufacturer of the pan masala is advertising the product as a "no tobacco, no nicotine" product, the details, however, are yet to be independently verified.

Some other users, meanwhile, pointed out that the new brand could give a tough competition to pan-masala brands existing in the Indian market.

Many users also pointed out that the jets used in the video were not Rafale, but allegedly the American F-14 or Russian Mirage-2000s.

Upon being contacted, Qazi Ilham, a member of the graphic designing team at Magicreel, the company which has produced the commercial, said that it was for an Uttar Pradesh based client.

"It was made by us for a client in Uttar Pradesh, the product is likely to be out in the market soon," he said.

Although the repercussions of naming a pan-masala product after prominent defence equipment remain to be seen, for now, it seems to have succeeded in creating an initial hype on social media.