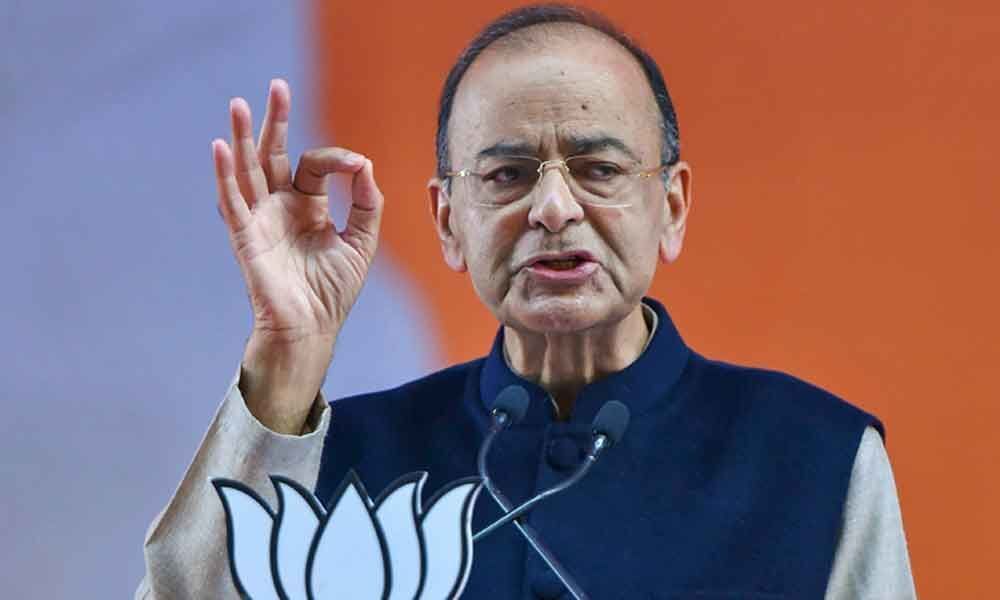 Finance Minister Arun Jaitley on Sunday attacked the "institutional destabilizers" saying that their lending shoulder to "completely unverified allegations" was destabilising the institution of the Chief Justice of India and said that if those peddling "falsehood" were not dealt with in an exemplary manner, the trend will only accelerate.

In a blog post, a day after allegations of sexual harassment surfaced against Chief Justice of India Ranjan Gogoi, Jaitley said the incident of a junior ex-lady employee of the Supreme Court making harassment charges has "acquired a disproportionate magnitude".

"Such complaints, when they are made in the ordinary course of any administrative functioning, are referred to the appropriate committee. However, when the complainant distributes copies of her representation to other judges of the Supreme Court and the media in order to sensationalise her allegations, it ceases to be routine.

"When four digital media organisations with an unparalleled track record of 'institutional disruption' send similar questionnaires to the Chief Justice of India, there is obviously something more than what meets the eye," he said.

In the blog 'It's Time to Stand up With the Judiciary', Jaitley said India has always taken pride in its independent judiciary.

The CJI on Saturday rubbished an allegation of sexual harassment against him, saying there was a "larger conspiracy" to destabilize the independence of the judiciary, which, he said, is "under very serious threat".

After the allegation levelled by a former employee of the Supreme Court was reported by a section of the media, a three-member bench of the apex court, headed by the Chief Justice and including Justice Arun Mishra and Justice Sanjeev Khanna, held an urgent hearing this morning -- a holiday -- over the matter.

Jaitley said that the present CJI is extremely well regarded in terms of personal decency, values, ethics and integrity.

"Even when critics disagree with his judicial view, his value system has never been questioned. Lending shoulder to completely unverified allegations coming from a disgruntled person with a not-so-glorious track record is aiding the process of destabilisation of the institution of the Chief Justice of India," he said.

Jaitley said that reputation is an integral part of a person's fundamental right to live with dignity. "An intimidated judge can fear consequences of a possible view that he is taking. It is, therefore, essential that all well-meaning persons stand with the judicial institution when destabilizers get ready for an assault."

He said since the case relating to the allegations is pending in judicial side before the bench of a court, it should be left to the wisdom of the court as to how they intend to deal with it.

"But let it be remembered that this is not the first case of the 'institutional destabilizers' nor will it be the last. If those who peddle falsehood to destroy the institution are not dealt with in an exemplary manner, this trend will only accelerate, he said.

Jaitley said that the last few years have witnessed the consolidation of 'institution destabilizers' in a major way.

He said many of the "destabilisers represent Left or ultra-left views, have no electoral base or popular support but still have a disproportionate presence in the media and the academia." "When ousted for mainstream media, they have taken refuge in the digital and social media. They continue to believe in the old Marxian philosophy of 'wrecking the system from within.' They use free speech to destroy the judicial institution," he said.

The minister said that this section has found a convenient ally in a small but vocal section of the bar. "This section exploits the judicial refrain of excessively using the power of contempt. However, they themselves have no hesitation in contemptuous behaviour.

"They go public against individual judges, including the Chief Justice, when they fail to get a favourable order. They carry on social media campaigns against judges who write judgements adverse to them. They have little regard for truth but masquerade as protectors of public interest. Their behaviour in courts is offensive both to the Bench and their opponents. They threaten walkouts if judges are in disagreement. For the 'institutional disruptors' there are no red lines."

The minister said that India has witnessed a series of attacks by the 'institution disruptors' against judges who are unwilling to agree with them. "It may not be an exaggeration to say that today both in court and by creating an environment outside, a mass-intimidation of Judges is on. Some lawyers have used intimidatory behaviour as a tactic to expand their practise. Intimidation and discrediting are important weapons in the hands of these people."

He said cases after cases have witnessed facts being manufactured and twisted over the last few years and falsehood found support in a section in the media. "Upon deeper analysis most of them were found to be factually incorrect. Facts were manufactured. The same 'gang' was behind this campaign," he said.

The BJP leader said that independent judiciary and free media are both essential for a vibrant democracy and one cannot take upon itself the task of destroying the other.