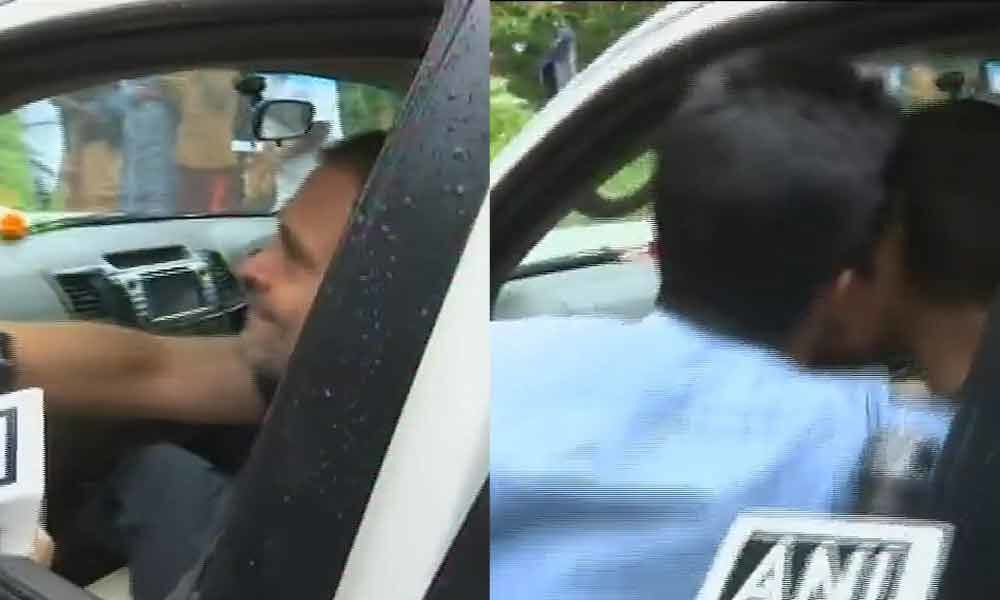 Rahul Gandhi was taken by surprise during a visit to his parliamentary constituency of Wayanad when a man planted a sudden kiss on the Congress leader's cheek.

Wayanad: Rahul Gandhi was taken by surprise during a visit to his parliamentary constituency of Wayanad when a man planted a sudden kiss on the Congress leader's cheek.

Rahul is in Wayanad to survey flood-affected areas and to review rescue and relief operations in the aftermath of the deluge following incessant downpour.

Seated in the front passenger seat of a car, Gandhi was making his was after meeting affected residents. While media persons jostled for the parliamentarian's byte, locals, one after the other, made way to shake hands with their leader.

One such ardent supporter took a moment to kiss Gandhi on his cheek. The said man leaned inside the car, pulled Gandhi towards him and gave him a peg.

Rahul, however, continued shaking hands with people of his constituency and his vehicle moved ahead after the brief interaction.

The former Congress president is no stranger to such incidents as he was also kissed by a woman supporter during a rally in Gujarat this year in February.

In 2017, a young girl had climbed atop Rahul Gandhi's vehicle during his roadshow in Bharuch for a selfie the lawmaker.

#WATCH A man kisses Congress MP Rahul Gandhi during his visit to Wayanad in Kerala. pic.twitter.com/9WQxWQrjV8