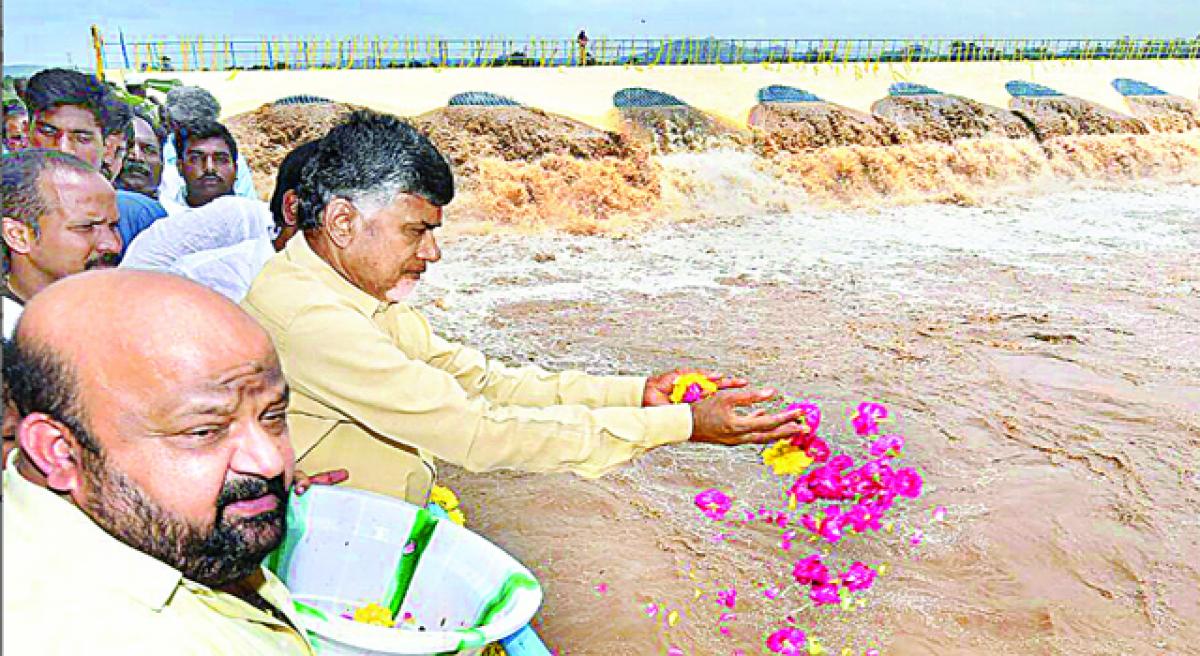 The impending Krishna Pushkaralu has ignited new debate among Vedic scholars, particularly the Swamijis who would be playing a key role during the 12-day event. The row is due to the release of Godavari water into the Krishna river thro­ugh the Pattiseema Lift Irrigation Scheme for the Pushkaralu.

​Vijayawada: The impending Krishna Pushkaralu has ignited new debate among Vedic scholars, particularly the Swamijis who would be playing a key role during the 12-day event. The row is due to the release of Godavari water into the Krishna river thro­ugh the Pattiseema Lift Irrigation Scheme for the Pushkaralu.

The State government claims that there would be enough water for the devotees during the Puskaralu unlike in the past. According to Minister for Water Resources Devineni Umamaheswara Rao, there is about 2.60 tmc ft of water available in the Pulichintala Project which could be used for the Pushkaralu if required.

He further said that the river would get sufficient water from Godavari through Pattiseema and there would be no problem for the devotees during the 12 days. The water has already travelled for 70 kilometres now and is scheduled to cross Eluru by Wednesday evening. “Three pumps are working now and there is about 3,500 cusecs of water flowing. We will add more pumps and bring more water as Pushkaralu begin,” he asserted.

However, Visakha Peethadhipati Swami Swaroopanandendra had raised objections over the government’s decision to release Godavari water into Krishna. He had reportedly wrote a letter to the Endowments Principal Secretary J S V Prasad asking him to stop Godavari water and get Krishna water from Srisailam and Nagarjunasagar reservoirs, at least for the Pushkaralu.

He had reportedly told the government that the river should have its own water when the Pushkaralu are in progress. But others, including some Peethadhipathis have differed with this idea of having any doubts on the Pushkaralu because of the Sangamam.

“Water has no identity. Its identity comes from where it is. The moment some water from stream or rivulet joins a river, the water gets the identity of the respective river. Moreover, Godavari holy spirit also joins the Krishna holiness,” asserted Siva Swamiji of Saivakshetram at Mandadam in Guntur district. He said that there was no need for anyone to raise any doubts on the holiness of the water.

Kailasagiri Swamiji of Srisaialm said that Godavari water in Krishna is not an objection for the holy bath during Pushkaralu. “The moment water enters into Krishna, it becomes Krishna water and there is no space for any doubt,” he added.

Swami Kamalanda Bharati said that river where Pushkaralu are conducted is important and not the water. “There is Krishna water in Hyderabad and it does not mean bathing with that water gives the purity of Pushkaralu. We need to visit the river and take bath and cleanse our sins,” he said.

Prajna Bharati chairman Dr Tripuraneni Hanuman Chowdary also justified the interlinking of rivers and ruled out that mixing Godavari water with Krishna does not reduce the sanctity of Krishna river. He said that the water would not lose its sanctity for any reason and it would remain Krishna Pushkaralu.

Futurologist G V L Narasimha Charyulu differed with the statement and said that with Godavari water flowing into Krishna river, this Pushkaralu would not be called Krishna Pushkaralu. He further said that the Pushkaralu could be renamed as Krishna-Godavari Pushkaralu. He also blamed the advisory system with the government for taking unilateral decisions not involving service organisations and other experts on the issues.

Srinivasa Saraswati Swami, chairman of Uttarandhra Sadhu Parishad, sought to blame the government for not keeping the water ready. He said that the government was speaking about lakhs of devotees visiting the river, but not talks about availability of water and the safety.

Keeping the controversy aside, Kamalanda Bharati Swami appealed to the devotees to visit the river for holy bath where ever it is possible for them and not think of a large convergence keeping in view the unfortunate incident at Godavari Pushkaralu.