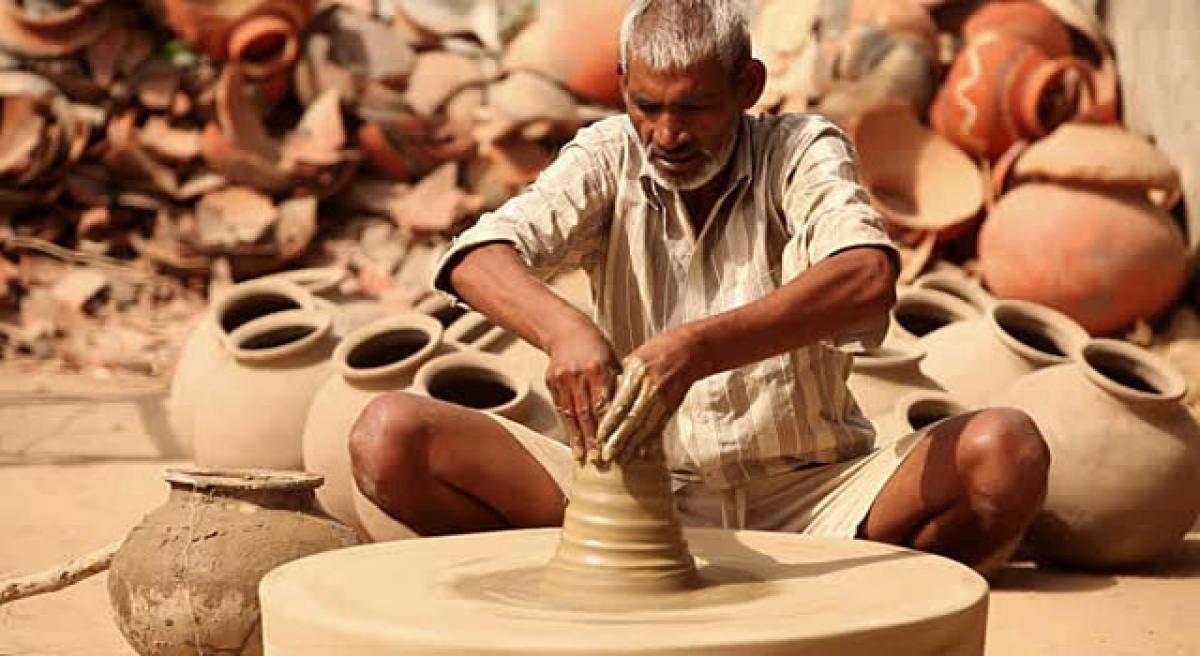 Potter Tulasi Ramudu, a resident of Narsapuram village in Veldurthy mandal, has expressed great concern over the dying profession of pottery. “The clay pots are now being used only at the time of festivals like Bonalu for fetching water or at the time of taking the dead bodies (Kavadi) to crematorium.

Kurnool: Potter Tulasi Ramudu, a resident of Narsapuram village in Veldurthy mandal, has expressed great concern over the dying profession of pottery. “The clay pots are now being used only at the time of festivals like Bonalu for fetching water or at the time of taking the dead bodies (Kavadi) to crematorium. Pottery as a craft grew in the bosom of civilisation and it coexisted with humanity for thousands of years.

Now, it is under the deluge of polymer inventions and the life of clay is snubbed. And, the potters are literally on roads. The pottery profession has totally lost its glory in the recent days due to domination of plastic. In olden days, every house used to have clay made pots.

Less number of silver and more number of clay pots have been used by the people. The potters, belonging to Kummari Salivahana community, were having handful of works and a fistful of earnings. In course of time, the clay made pots and other articles have vanished from the society. Plastic articles have replaced the clay thereby darkening the lives of potters.

With the vanishing of their profession, the potters are leading miserable lives as they don’t know other source of living. The history reveals that the earthen pots are good for health. Clay pots are known to be the poor man’s fridge. During summer everyone likes to drink water stored in the clay made pot. This has also replaced by the refrigerators of various brands.

In several villages, potters are earning daily bread by manufacturing clay pots. But, they hardly earn Rs 1,500 per month. Speaking to The Hans India, Tulasi Ramudu said that there is every need to give preference to earthen articles than the plastic ones.

As many as seven families in Veldurthy mandal besides the villagers of Bommireddypalle, Narsapuram, Kalugotla and Pendekal, Krishnagiri in Bethamcherla mandal used to manufacture the clay made articles. He said all of them have abandoned the business long time ago except him, who is running the business for the last 40 years. He says there is no business except in summer season.

Even the clay made articles in Kurnool have lost its sheen with the entry of Telangana clay items. People are not giving preference to the black soil made articles and instead showing more interest in red soil made items.

“With no work on hand, we are eking out livelihood as farm labourers and urged the government to support the community by introducing pension scheme to potters,” he urged. In view of public health, there is every need to encourage the clay made articles by telling the benefits to people.