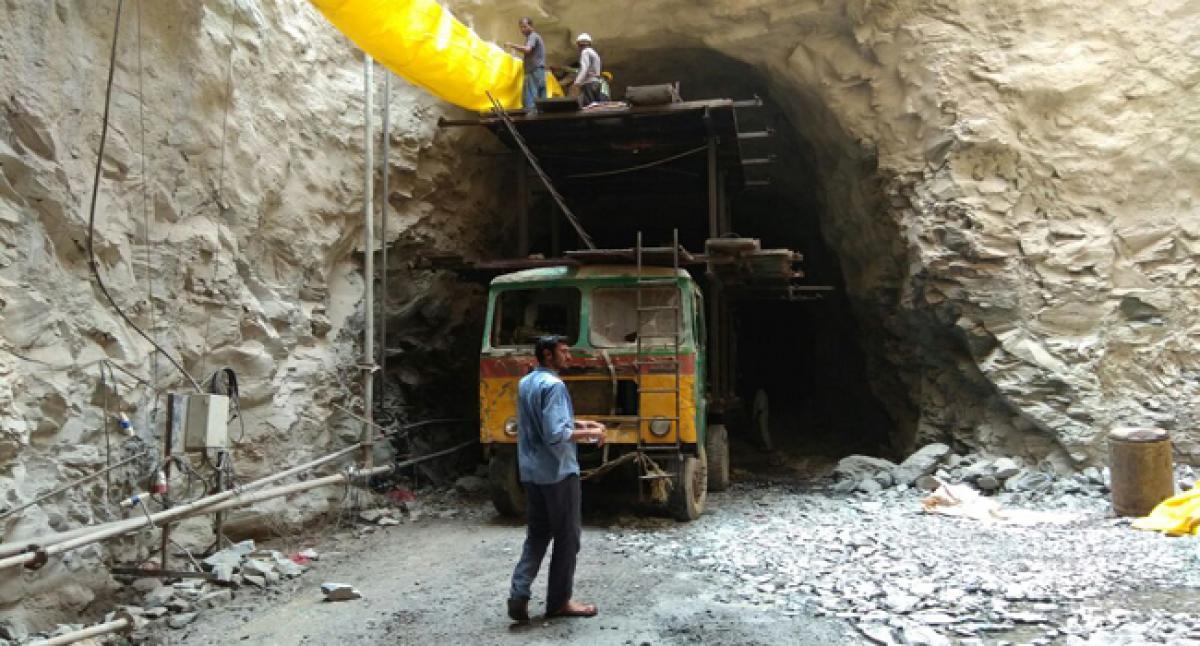 Though the State government makes several statements on completing construction of the Pula Subbaiah Veligonda Project in Prakasam district on a...

Ongole: Though the State government makes several statements on completing construction of the Pula Subbaiah Veligonda Project in Prakasam district on a war-footing, the ground reality is very disappointing.

The government not only failed to provide enough budget for the construction of the project, but also failed to adjust just Rs 7.5 crore to pay the electricity bill to continue the ongoing works without interruption. The locals and farmers feel that the government is showing discrimination against the district and the people here for not voting for the Telugu Desam Party in the last elections.

When completed, the Veligonda Project will draw 43.58 tmcft of flood water from the backwaters of Srisailam reservoir. The water travels through two tunnels of more than 18 km in length and fills Nallamala Sagar with 10 tmcft dead storage capacity, constructed by closing three natural gaps between hills at Sunkesula, Gottipadiya and Kakarla.

Once flood water is received, the project provides water to nearly 4.47 lakh acres of land fully utilised, 15.25 lakh people get safe drinking water in 737 villages in 23 mandals of Prakasam, 5 mandals of Nellore and 2 mandals of Kadapa districts.

Chandrababu Naidu laid foundation stone for the project during his earlier tenure as the Chief Minister of the united Andhra Pradesh 22 years ago on March 5, 1996 with a promise to complete the project in 5 years. But, the works commenced only in August 2005.

By January 2018, tunnel boring was completed for about 15.1 km of the Tunnel I and 10.7 km of the Tunnel II. Showing the reason that the contractors are not performing up to the expectation, the government deleted work of 3.6 km from Tunnel-I and 8.07 km from the Tunnel II contractors and asked them to stop the boring of Tunnel-I at 15.2 km and Tunnel-II at 10.82 km. It invited new tenders by revising the estimates of project cost from Rs 5,150 crore to Rs 7,800 crore, in March 2018.

The contractors of the Tunnel I and II went to court for cancelling their contracts and the case became the reason for further delay of six months. Last week, the court ordered the government to continue the tender process and try to consider the pleas of the earlier contractors.

The superintending engineer of Prakasam district, R Reddaiah, said that the tenders’ process will be completed by the commissioner of tenders now. He said that the new contractors will use the machinery like boring machine and others of the old contractors and pay their value, about Rs 23 crore, to them.

He said that though the tunnels work was halted a long time ago, the head regulator works are going on and about 25 per cent of works have been completed so far.

The work of head regulator is being taken up in the backwaters of the Srisailam Project, at Kollamvagu. As there is no pathway to the place in the thick forest, the officials and workers are daring their lives by travelling with the material and machinery transporting it to the site on makeshift punts.

The superintending engineer said that the concrete works are just about to begin at the head regulator. Even if the government appoints a new contractor immediately, it cannot start the work as the electricity is disconnected at the site for not paying the power bill for a long time.

Chunduru Ranga Rao, president of the Prakasam District Development Forum, said that after witnessing the response of the government towards the Veligonda Project, the public are feeling that they are being discriminated. He alleged that the TDP government is taking revenge on the public hailing from the fluoride-affected western area in the drought-hit district.

He questioned the government how to believe its statements of completing about 12 to 15 metres of boring the tunnels daily when its maximum proved capacity is just 6 metres. He said that if the government is really committed to the welfare of poor people dying with kidney diseases in the area, it should have completed the remaining 3 to 4 kilometres of the boring by now.

But it has no commitment and responsibility about the people of the Prakasam district. Chunchu Seshaiah, general secretary of Ranga Kisan Samstha, said that though the foundation of the project was laid by Chief Minister N Chandrababu Naidu in 1996, he didn’t care to allocate funds and the next government continued it as much as it can.

As soon as the TDP government regained power in the state, the project started to face discrimination again and it failed to receive enough funds for the construction, he added. He demanded that the government sanction Rs 1,000 to Rs 1,500 crore in the budget and allocate sufficient quantity of water to the project instead of asking to use remaining waters.