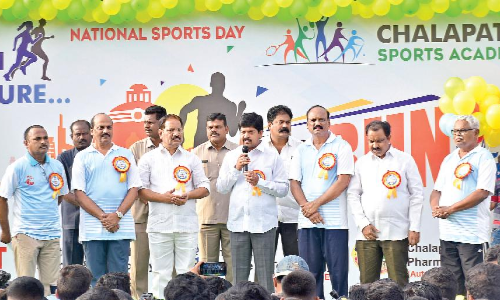 Minister for Sports and Youth Affairs Kollu Ravindra, said that the state government is encouraging sports and extending helping hand to the players

Guntur: Minister for Sports and Youth Affairs Kollu Ravindra, said that the state government is encouraging sports and extending helping hand to the players.

He flagged off a rally and inaugurated 7-K Run at Mother Teresa statue here on Wednesday, on the occasion of National Sports Day.

The 7K Run continued up to Chalapathi Pharmacy College at Lam. Speaking on this occasion, Kollu Ravindra appreciated the organisers for conducting 7K Run programme on the occasion of ‘Hockey Mantrikudu’ Dhyan Chand birth anniversary.

He said that the state government had taken steps to provide facilities to the players in all the districts in the state.

He said that BR Stadium in the state would be developed to match international standards for the convenience of the players.

SAAP chairman Ankamma Chowdary wished that the players would have bright future.