The opening shot of a commercial features Nissan-'s latest American line-up. The X-Trail that we can see in the ad might be the upcoming

The opening shot of a commercial features Nissan's latest American line-up. The X-Trail that we can see in the ad might be the upcoming mid-life update of the India-bound SUV. 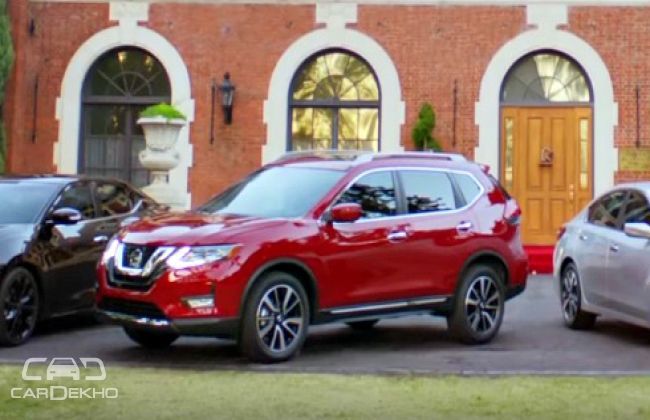 The Japanese automaker Nissan through an advertisement which was aired in the USA, might have given us a glimpse of the facelifted X-Trail (also known as Rogue). The present X-Trail was showcased at the 2016 Indian Auto Expo and the SUV is scheduled to be launched in the current fiscal year. Instead of the pre-facelift version that was showcased at the Auto Expo, Nissan might just launch this updated version in India, which is likely to make its global debut soon.

Only the front profile of the SUV is visible in the commercial. Looking at it, the 2017 version will feature the latest iteration of Nissan’s V-Motion grille along with a redesigned front bumper and new alloy wheels. The headlights appear to be similar to the outgoing version. Expect subtle changes to the rear profile as well. On the inside, the 2017 X-Trail is most likely to get Nissan’s latest infotainment system featuring support for Apple CarPlay and Google Android Auto.

Mechanically, The X-Trail SUV will be launched only in the hybrid avatar in India. The X-Trail Hybrid will be powered by a 2.0-litre petrol engine that pushes out 147PS, and will be coupled to a 41PS electric motor. The hybrid unit will be mated to a CVT (continuously variable transmission) automatic.