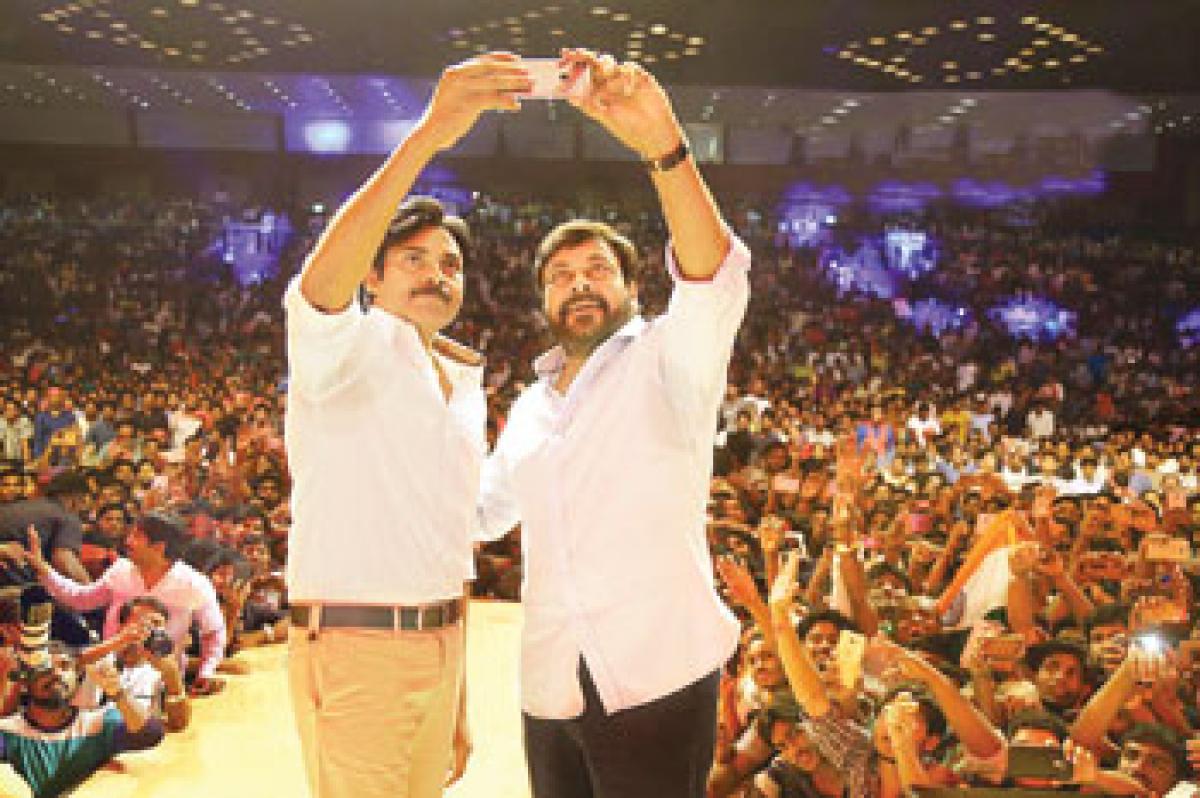 The soundtrack launch of ‘Sardaar Gabbar Singh’ (SGS) in Hyderabad on Sunday was nothing short of a ‘filmi’ show. Chiranjeevi, who walked in as the...

The soundtrack launch of ‘Sardaar Gabbar Singh’ (SGS) in Hyderabad on Sunday was nothing short of a ‘filmi’ show. Chiranjeevi, who walked in as the chief guest, and Pawan Kalyan were at their candid best hugged each other and took a selfie (on stage with fans in the background), sending the massive turnout into frenzy.

But hang on, there’s more to the new found PDA between the brothers than what meets the eye. In a bid to torch all speculations, the brother-duo took to the microphone and dispelled rumours about their alleged rift. Chiru’s speech, close to 25 minutes, had the audience hooting all through.

After releasing the theatrical trailer, he said, “‘Gabbar Singh’ was the only film I have watched it repeatedly in the recent times on TV. Pawan improvised and entertained everyone to the core and that’s what I want to see from him. He doesn't follow any trend but sets it. In ‘Attarintiki Daaredi’, we saw a different Pawan and now ‘SGS’ will be unique in its own way.”

He further appealed to Pawan not to quit films. "I heard that he was considering quitting films soon. I was shocked. Is this correct? I am advising Pawan not to leave the industry but rather balance his filmi career (keeping fans happy) with political aspirations. I’m confident he can sail on two boats and I hope he will honour my plea,” he stated to a rousing reception.

Soon, Pawan wasted no time in expressing gratitude towards his elder brother. Getting nostalgic, he stated, “In my childhood I used to adore Amitabh Bahchan but ever since Annayya (Chiru) became a hero, I could only dream of him. I’ve witnessed the endurance he exhibited and the handwork he has put in to reach this stage. I never had any inclination towards acting but I was a bookworm. It was Annayya who advised me to act at a time when I was in a fix over my career.

So today, what I am is all because of him and he has been a great inspiration to many.” He further added, “Politically, my acts might not have gone down well with him, but I explained to him the reasons and I’m glad he was convinced. We might differ politically but ours is a bond of brotherhood and I don't have to prove that I love him. He is like my father figure. There are no differences as such and we are very much together."