The unbelievable scenes in Bollywood 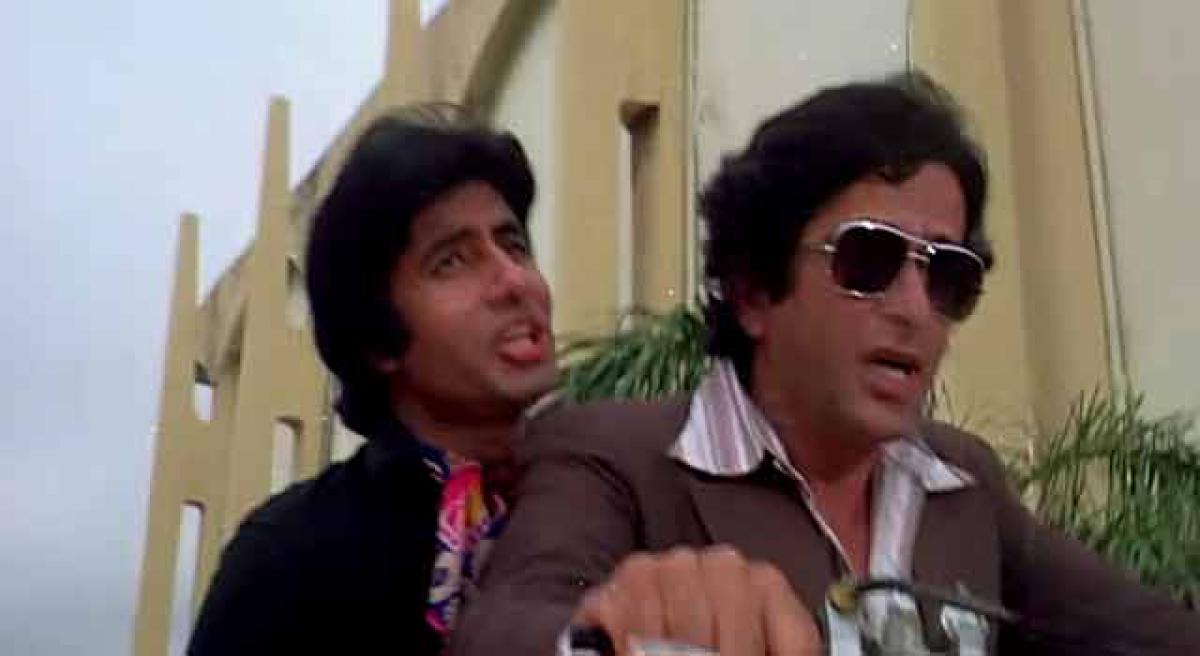 Besides the lovely voluptuous ladies of the 70s and 80s; the heavy duty dialogues and great actor clashes, there is something else which has never failed to awe me and that is the unbelievable but extraordinary scenes in Indian cinema. Here are some of those scenes that will make you laugh or go WTF as the slang goes but trust me they created cat calls and whistles.

Besides the lovely voluptuous ladies of the 70s and 80s; the heavy duty dialogues and great actor clashes, there is something else which has never failed to awe me and that is the unbelievable but extraordinary scenes in Indian cinema. Here are some of those scenes that will make you laugh or go WTF as the slang goes but trust me they created cat calls and whistles.

Raja Azad Singh stalling a plane that is ready to take off with a rope! – Yes, in this Manmohan Desai’s box office smasher called ‘Mard’, Raja Azad Singh chases a plane on a horse. He catches up with it and throws a “rassi ka fanda” (rope trap) at its tail and races to the other side of the runway to a pole; he ties the rope around it and stands ground with rope held tight in his Punjabi muscular hands.

The plane stops! Die Hulk! This one looked convincing with Dara Singh’s macho screen presence. Manmohan Desai’s art of making the unfathomable things into super convincing stuff on screen is a gift which is bestowed upon him.

Hand pumps were never looked upon as water pumping device post ‘Gadar’ in 2000. Sunny paji plucks the pump out as a hungry cow would pluck grass. He then smashes half the population of the city with it before escaping. Pakistanis probably hate the hand pump since then but Anil Sharma created his place in the film chronicles relying on Sunny Deol’s Rambo-like screen image. In one of the biggest comical tributes to this came in the film ‘Yamla Pagla Deewana’.

In a scene Sunny is trying to pump water from a hand pump and Bobby Deol sarcastically retorts – “Abbey chala raha hai ya ukhadega?” I remember the roars of laughter in the balcony till date.

My most favourite scene in this genre, again, belongs to Sunny Deol. The movie was ‘Ghatak’. Sunny decides to protect a mad woman who is being harassed by the goons of the villain – Kathiya. In a bid to save her, Sunny is attacked by at least 15 odd men and Sunny, obviously, single-handedly lifts a wooden ladder and throws the men at least 20 yards away in one swift jerk.

The scene was delivered in slow motion adding that extra oomph to it. Watch it and you will find nothing indigestible about it. If you have watched any of Sooraj Barjatya’s movies closely then you will discover that whether in ‘Hum Aapke Hain Kaun’ or ‘Maine Pyar Kiya’ the actors were down to earth and were as normal as you and I. It were the animals, which were gifted in his films.

One of my favourite scenes in the list of the unbelievable is from ‘Maine Pyar Kiya’. In the film Mohnish Behl is hanging by a rope above a deep valley and trying to save himself from dying, at this moment the hero’s pet the “kabootar” arrives and realises that this man tried to shoot him in the past.

Yes, they show what the “kabootar” is “sochofying” with the help of a split screen with Behl firing a pistol and going “Hoo hoo hahahaha”. The “kabootar” flaps its wings in the eyes of the villain and he gets scared. Subsequently, he slips and dies falling off in the gorge. We also see that the “kabootar” is flying happily across valley after the death of Mohnish Behl. Trust me the audience loved it.

My most favourite scene till date comes from the film ‘Suhaag’ (1979). Two brothers have to save their father and mother, who are boarding a helicopter which has a time bomb planted in it. In the climax, the brother who is riding the bike injures his arm when they fall off the bike and hence cannot ride and the other one is blind.

What do you do? In one of Indian cinema’s most thrilling motorbike rides ever, the blind brother drives and the wounded brother guides him. I was a six-years-old when I saw this movie at Novelty Cinema, Saharanpur, UP. People in the front stood up and were shouting, and I had to peep through sideways to watch what’s going on in the film. And the highlight is the usher walked in and shouted “Sit down you B#$%^&*s.” Believe me, it actually happened.