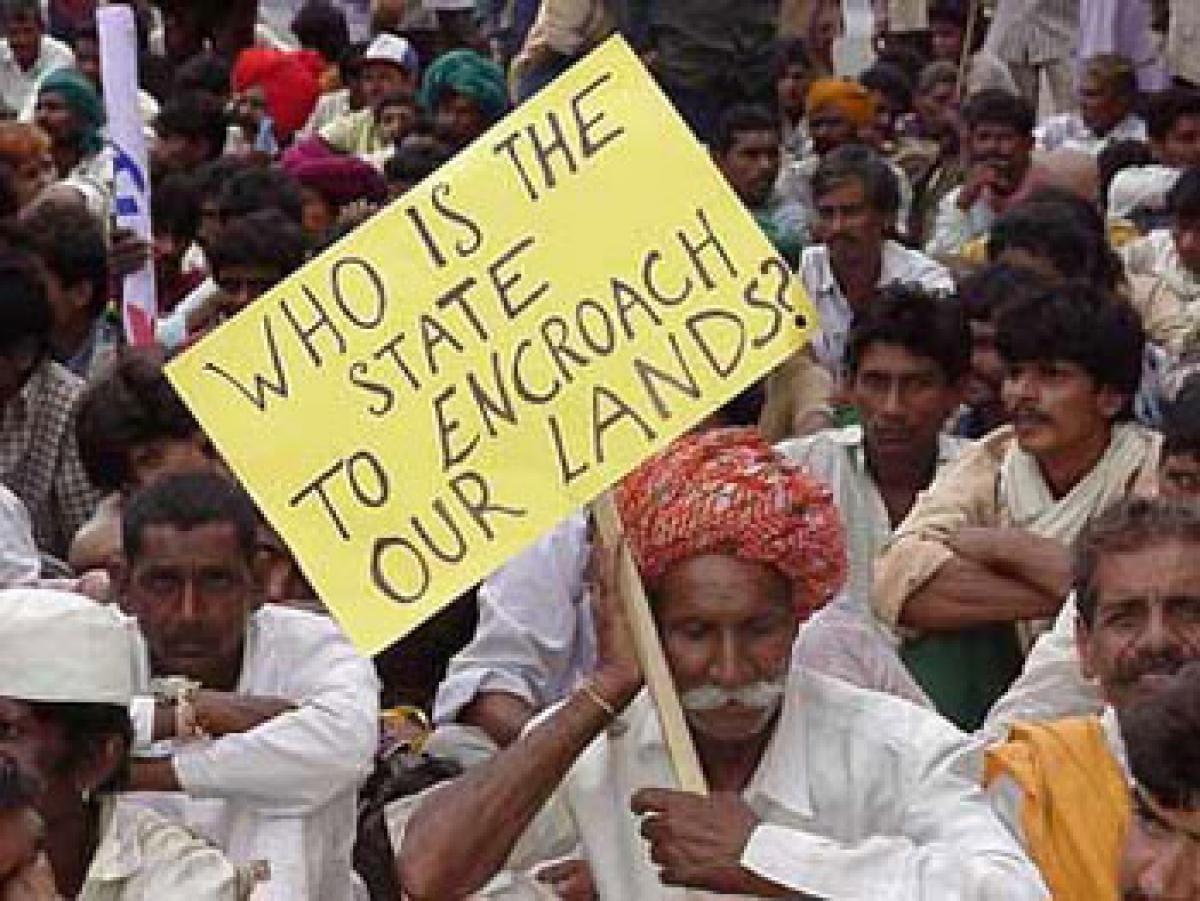 The long drawn conflict between development and displacement across the country from Sardar Sarovar to Polavaram resulted in the Land Acquisition Act of 2013 which has been widely hailed as a significant legislation that protects the interests of land owners and the landless poor who depend on this land being acquired.

Though the policy of land procurement envisaged in GO 123 of July 30, 2015, of the Telangana government calls the process a voluntary sale of land, the reality is that the farmers are pushed to the wall in order to accept the conditions of land procurement instead of attaining the gains under the 2013 Land Acquisition Act.

The long drawn conflict between development and displacement across the country from Sardar Sarovar to Polavaram resulted in the Land Acquisition Act of 2013 which has been widely hailed as a significant legislation that protects the interests of land owners and the landless poor who depend on this land being acquired. The Modi government made a vain bid to dilute the provisions of the Act which it supported while in opposition through a series of ordinances.

In a bid to bypass the 2013 Act, the Andhra Pradesh government resorted to land pooling for building the capital. Now, the Telangana government is unveiling the controversial policy of land procurement in an attempt to subvert the Act. The 2013 Act calls for a transparent method of land acquisition. It should be minimal. Land should be acquired through people's participation.

The very objective of the Act is that the social and economic conditions of the displaced should be better after displacement, when compared to the time when they owned the land. Such should be the rehabilitation mechanism. This is to ensure that the ecstasy of development does not result in an agony of displacement.

During the Telangana movement, the leadership always argued that the united Andhra Pradesh political leadership abetted alienation of Telangana lands. The promise of the movement for separate statehood was to restore these lands.

The GO 123 states: "In order to expeditiously procure land for public projects, government deems it fit to come out with a framework that allows the land owners to participate in the development process by willingly selling their land and properties thereon, for a consideration on the basis of an agreement between land owners and user department/undertaking/society/authority."

But, there is a wide difference between what is said in the GO and what is being done on the ground level. A visit to the areas where there are attempts to acquire land as per the new framework reveals the real intentions of the government in releasing such GOs instead of following the Land Acquisition Act.

The 'willingness' of the land owners is a misnomer. The authorities and the local political leaders are spreading a fear psychosis that if the land owners do not agree to alienate their lands as per the GO 123, they would end up getting too little and too late.

The land owners are also told that they would be caught in protracted litigation if they do not sell their lands as per this framework. Thus, the land owners are either induced or forced to give their willingness. A similar sort of strategy was adopted by the Andhra Pradesh government to make farmers agree to land pooling at least in the river bed areas.

Though the policy of land procurement envisaged in GO 123 of July 30, 2015, of the Telangana government calls the process a voluntary sale of land, the reality is that the farmers are pushed to the wall in order to accept the conditions of land procurement instead of attaining the gains under the 2013 Land Acquisition Act.

In fact, the Telangana government issued GO 75 on June 5, 2015, to guide and facilitate acquisition of lands in strips or pockets which become critical for proper viability of the project, and bring in envisaged components to their logical deliverable stage in any irrigation projects or a road work, through a negotiated consent.

But in contravention of its own GO, the Telangana government later came out with GO 123, extending the policy of so-called voluntary land procurement, an euphemism for land acquisition, bypassing the legislation to any extent of land. The GO 75 stipulates an upper limit of 75 acres for land procurement that too for completing projects at a critical stage. But, the GO 123 waives any such upper limit facilitating hundreds and thousands of acres to be alienated through the policy of land procurement only.

Thus the GO 123 is a violation of 2013 Act passed by Parliament and the rehabilitation policy of the united Andhra Pradesh government which is still in vogue in Telangana State, too. The State government intends to procure land by this GO 123 for Pranahita project and for setting up manufacturing investment zone in Zaheerabad etc. The land thus to be procured is estimated to be around 14,000 acres.

The clause 8 of the GO 123 states that the consideration as agreed to by individual land owner and the procuring agency shall inter alia include the value of the land and property, perceived loss of livelihood, equivalent costs required for rehabilitation and resettlement of willing land owners and others. This means that the land owners by receiving a said amount would have to forego the rights to rehabilitation and resettlement. Thus the State government order simply violates an act passed by the Parliament, and is, therefore, legally untenable.

The clause 9 of the GO 123 states that the land owner will not have any right to further enhancement of consideration by any other forum. This means even the judicial redressal is also taken away. Once the land owner is induced or forced to agree to the sale of the land, he or she would be losing all rights and will not even have judicial recourse to justice.

The Telangana government issued another GO 214 on November 28, 2015, as an amendment to GO 123. This GO states that the words “equivalent costs required for rehabilitation and resettlement of willing land owners and others in GO 123” will be deleted. The intentions of deleting these provisions in GO 123 are not made clear.

Will the government provide for rehabilitation of land owners and landless in addition to the sale consideration for procurement of land? The landless and the land owners express fears that the GO 214 would deprive them of the right to rehabilitation.

In case the government intends to provide for rehabilitation in addition to sale consideration, the same could have been made explicitly clear in the GO 214 itself. If so, which act would determine the extent of rehabilitation measures? The GO 214 is silent on these crucial aspects for those whose land and livelihoods are being alienated.

The GOs do not talk about the social impact assessment referred to in the 2013 Act. In the name of ex gratia, the assignees would be paid less than what is to be paid to the land owners. The courts have made it clear that the land owners and assignees should be treated alike while deciding the compensation for alienation of lands. But the State government GOs violate these provisions and the legal pronouncements.