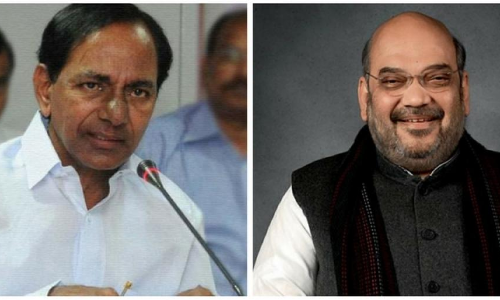 The strategic silence between BJP and TRS is broken as the Presidential elections concluded. The two parties are now back to business in polemics. The party strongman, Ram Madhav, exhorted the party men in Telangana to fight against TRS. Politics is only meant to get into power and not about doing charity, remarked the BJP leader.

The strategic silence between BJP and TRS is broken as the Presidential elections concluded. The two parties are now back to business in polemics. The party strongman, Ram Madhav, exhorted the party men in Telangana to fight against TRS. Politics is only meant to get into power and not about doing charity, remarked the BJP leader.

The battle cry is clear. The call is clarion. It’s true, there cannot be charity if one wants to come to power. But, there can also be charity if it helps in coming to power. Whether BJP will be charitable or uncharitable towards TRS only depends on what suits its design to come to power in New Delhi rather than in Hyderabad. The rope in Hyderabad is too long. There are many knots in the way. Yet, the BJP’s political histrionics in Telangana are not without reason.

The BJP is normally perceived to be a North Indian party with Hindi linguistic hegemony being the defining feature of its leadership and discourse. Barring Karnataka, the party failed to make any serious headway due to strong explicit or implicit Dravidian identity.

In fact, over a period, more so after the emergence of TRS, BJP lost its ground, suffering huge erosion in Hyderabad too which was once its stronghold. The successive governments succeeding in preventing a communally surcharged atmosphere to rock the city marred the competitive politico-religious mobilisation that would have provided the breeding ground for the growth of saffron brigade.

The cultural ethos and the politically conscious character of Telangana society are also impediments in the way of authoring Uttar Pradesh-type of Lotus experiment in Telangana. The party hopes to find a Yogi to spearhead an Ashvamedha Yaga in Telangana. Telangana may have politicians who are fond of performing yagas, but yogis may find it an infertile ground.

The Telangana BJP leadership is dissimilar to the genre of BJP leaders found in the Hindi heartland or Marathi-Gujarati belt, who are ambidextrous in triggering a virulent engagement. This is fortunately evident from the fact that the BJP state leadership could not initiate any infectious campaign on the surcharged issue of Muslim reservations.

Even the party all India leadership was also reportedly annoyed over this failure. Besides, none less than party all India president Amit Shah reportedly expressed unhappiness over the way the state party leaders function at cross purposes. Sources close to BJP reveal that no two top leaders of the state party can work in cohesion. The differences are longstanding and the bickerings cannot be extinguished so easily.

The popular tale in the political circles is that a majority of state BJP leaders are co-opted by the TRS leadership. The occasional outbursts by only a few leaders and long spells of silence give credence to such allegations.

Unlike in Uttar Pradesh, the party failed to invent new leaders at the state-level. Unlike in Assam, the party is not attracting any charismatic leader from other parties to take up the captaincy.

The Telangana BJP has always been the victim of strategic requirements of the all India party. The party suffered heavily due to its association with TDP in the united state and thus failed to retain the massive vote it could secure in the wake of Kargil War and due to Vajpayee factor.

The BJP often derives its inspiration for a successful experiment in Telangana from its Karnataka experience. But, the party has lost a lot of ground even in the land of Kannadigas and finds itself swimming against tide to regain the lost ground. In this only South Indian state where it tasted power, the BJP had a favorable arithmetic. The regional party in the form of Janata Dal (S) was largely discredited.

The caste calculus in the form of Lingayat vote bank also helped the party climb the ladder of power.
There is no such political situation in Telangana. The ruling TRS is still formidable contrary to the experience in Assam where the ruling Congress faced a strong anti-incumbency as it was in power for successive terms.

Similarly, the BJP was an active participant in the movement for Telangana identity in the form of separate statehood. The party’s support was critical for realising this long-cherished dream of people of Telangana for a separate state. Yet, the party could not capitalise on this sympathy. The party that delivered the state failed to do so. How can the party that extended support to Congress in delivering the promise of separate state can benefit from it? The TRS could appropriate all the sympathies for making the dream come true.

Unlike in Assam where the regional party disintegrated, the ruling TRS is in full spate. The Congress in Telangana unlike its counterpart in Assam is not a ruling party in Telangana to incur the wrath of people. The party is still the major opposition in the state and a force to reckon with. The political landscape in Telangana is yet to become either trigonometric or geometric.

But, it is also equally true that the pro-Modi sentiment prevailing across the country will certainly help the party in the state. Even the TRS is not ready to counter this Modi narrative, hoping that it would not hurt its chances in the Assembly elections even though it can show some impact in parliamentary vote.

Besides, the TRS perception of BJP story is clear. It does not worry so much over the surge of saffron party. Any significant advance of BJP will only cut into the opposition vote share, thus benefiting the ruling party. Given the fact that it could only reap a wafer-thin win in 2014, the party is right in fearing the perils of any opposition consolidation.

Thus, the TRS considers the BJP to be a friend in foe. This is precisely the reason why the TRS supremo and the Chief Minister K Chandrashekar Rao who reacted so aggressively over Amit Shah’s comments chose to ignore Rahul Gandhi’s criticism. The TRS seeks to benefit from creating an optical illusion that BJP is the real alternative to it. This is a clever strategy by the politically shrewd TRS leadership to keep Congress out of reckoning.

Similarly, the BJP will not show any charity towards TRS as it too wants Congress to marginalise. There is, thus, a common cause between BJP and TRS in keeping Congress out of debate. The BJP knows it well that TRS is more than anxious to join the NDA bandwagon at an apt moment. The unconditional support extended by the TRS in the elections to the posts of President and Vice-President was more than reassuring for BJP national leadership. Thus, TRS will be BJP’s ‘uncharitable’ ally.

Though many sanyasis are in the BJP’s extended Pariwar, the party is indeed not indulging in political sanyasa. It shall leave no stone unturned to rule the entire nation given a possibility. In this Rajasuya Yaga, parties can be either friends or foes depending upon the prevailing situation. TRS is no exception when it comes to such a strategy.

Politics are of course cold-blooded. BJP shall continue to cherish and work for coming to power in Telangana. But, it may end up in targeting a maximum number of MPs to support it in the race for Delhi throne at least in 2019.