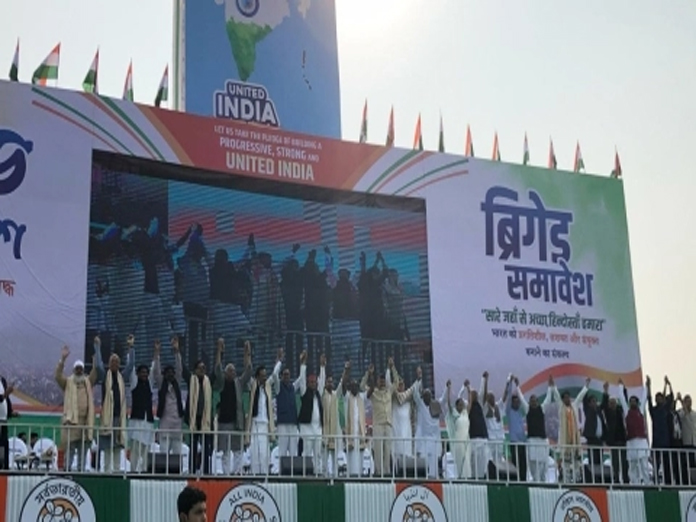 The Trinamool-sponsored ‘United India Rally’ in Kolkata on Saturday was much a show of strength for the Opposition allies as it is for the nation at large. The BJP which till now refused to take this move of the Opposition as a serious one has now come to the conclusion that finally the battle lines have been drawn and the fight is going to be between ‘Modi and dealers of corruption,’ as the BJP says. They are also trying to pooh pooh the mahagatbandhan as leaderless alliance.

Some say in a way the Kolkata meeting has announced the arrival of Mamata Banerjee as a national leader and she would be the contender for Prime Minister’s post. In politics anything can happen. But then the fact that the BJP is questioning the alliance as to who would be the face for the post of Prime Minister indicates that the BJP has accepted that it will not be a cakewalk for the saffron party and this time one cannot say with confidence, ‘Ab ki baar phir Modi Sarkar.’

A close look at fast changing political scenario shows that the plates have shifted. The relaunch of Rahul has worked for the Congress and it has won in Chhattisgarh, Madhya Pradesh and Rajasthan. The grand old party has regained much of its old chivalry. In Uttar Pradesh, gatbandhan between “aunt and nephew,” Mayawati of the BSP and Akhilesh of Samajwadi Party has been stitched and they have decided to sail in the anti BJP front.

Mamata also made her moves carefully and exhibited her supremacy by organising the mega rally. A lot of background activity has gone into organising this rally. She has been in close contact with AP Chief Minister N Chandrababu Naidu and she has succeeded in bringing 23 parties on one platform. Interestingly, she was the master of ceremonies on Saturday.

The only Chief Minister who has been keeping his cards close to his chest is Navin Patnaik. The Telangana Chief Minister has made his stand very clear that he is in favour of non-BJP non-Congress alliance. What shape it will take only time will tell. As of now, all the major parties have gone with the anti-BJP front only.

Though Mamata and all other leaders had taken a stand that the focus of the alliance is to prevent the BJP from coming to power and the issue of who would be the Prime Minister would be decided after the elections, one cannot deny that she too could be nursing the ambition of leading the country. If that is so, Mamata has some tricky navigation in store for her.

The Bengalis have been of the opinion that they did not get their due share and recognition at national level as they do not have the necessary political clout in Delhi. There were very few leaders like Pranab Mukherjee who was Minister for decades before becoming the President of India. Another leader who rode to great heights as highly respectable person was the Speaker of the Lok Sabha Somnath Chatterjee.

It remains to be seen if the Bengali voters will look at Didi as a potential Prime Minister or not. One thing appears to be certain is that her image of being a strong leader of “Maa, Maati, Manush” can give her unexpected dividends. Therefore, the ‘United India Rally’ may have been well worth the investment for Mamata.