Ustad, the mighty man eater of Ranthambore languishes in captivity 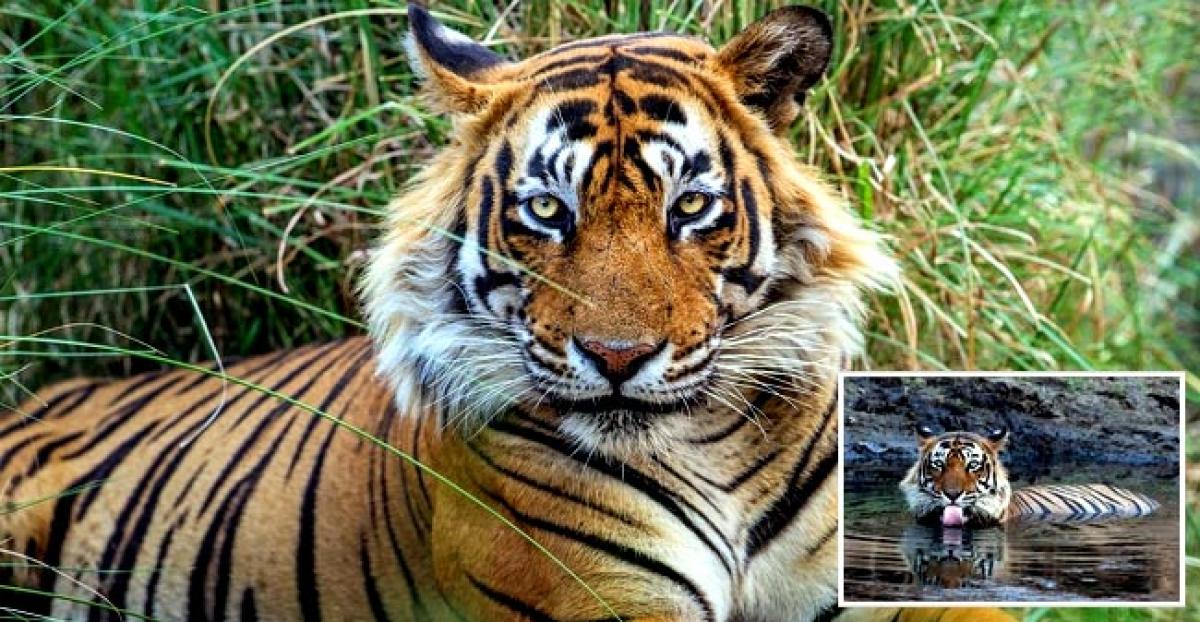 Labelled as \"man-eater\", allegedly under pressure from the tourist lobby of Ranthambore National Park in Rajasthan, after it killed four humans in five years, the mighty male tiger \"T-24\" known as \"Ustad\" is living in captivity in a small enclosed area without official sanction, an RTI query has revealed.

New Delhi: Labelled as "man-eater", allegedly under pressure from the tourist lobby of Ranthambore National Park in Rajasthan, after it killed four humans in five years, the mighty male tiger "T-24" known as "Ustad" is living in captivity in a small enclosed area without official sanction, an RTI query has revealed.

Ustad, who is 10 years old, was one of the major attractions of the Ranthambore National Park till May 2015, when it killed its last human -- a forest guard, the 57-year-old Rampal Saini.

Ustad was the "imprisoned" at the Sajjangarh Biological Park, Udaipur, a kind of zoo, around 400 km from Ranthambore, and has remained there since.

To keep an animal in permanent confinement the government has to take prior approval from the Centre. However, no such clearance was taken.

Neither has the Rajasthan government provided a "compliance report" on the tiger's proper upkeep, which the Rajasthan Forest Department was supposed to, rendering Ustad a "fateless convict", wildlife conservationists have said.

According to information obtained through Right to Information query, the Central Zoo Authority had on two occasions reminded the Rajasthan forest authorities to seek permission for the permanent housing and proper management of T-24. However, the officials have not yet replied.

"Kindly submit a compliance report regarding the proper upkeep and management of Tiger T-24 and also about the decision taken regarding its housing permanently at Sajjangarh Biological Park, Udaipur," the Central Zoo Authority (CZA) asked the Chief Wildlife Warden of Rajasthan in a letter.

This letter, obtained by wildlife activist Ajay Dubey, was a second reminder after an earlier one sent in August 2015.

According to Rajasthan forest officials, the Chief Wildlife Warden has the technical authority to shift any animal from the jungle to captivity if it poses a threat to humans.

"I was not holding the post at the time. But the Chief Wildlife Warden under Section 12(B) of the Wildlife Protection Act can send an animal to the zoo if it poses a threat to human life," a senior official of the Rajasthan Forest Department told IANS.

The Chief Wildlife Warden has temporary powers to shift an animal to the zoo. To shift an animal permanently, permission has to be sought from the central government, and it can be done only after a proper health report, treatment, case report of the animal.

"T-24 was moved without prior approval of the National Tiger Conservation Authority (NTCA). Even if he has to be kept in captivity, the process of not submitting a regular report on his upkeep and condition is not proper," Dubey told IANS.

Till he was taken away from Ranthambore Tiger Reserve in May 2015, Ustad was the most sighted tiger. But it was said to have become aggressive of late, exhibiting a change in behaviour.

He was not the only tiger in Ranthambore exhibiting such changes. Experts attribute this behaviour change to maximum intrusion and breach in the animal's space due to excessive tourist inflow in Ranthambore. Ustad's shifting was resisted by wildlife activists.

In March 2016, the Supreme Court dismissed a petition seeking Ustad's relocation, claiming its distress due to captivity. The apex court upheld the decision to keep it behind the bars.

It was, however, never proven that Ustad is a man-eater. The NTCA in a July 2015 report said that there had been a considerable time gap between the tiger's attacks on humans, which ruled out it being a man-eater.

Wildlife conservator and former Field Director of Sariska Tiger Reserve, Sunayan Sharma says that permission was not sought to move Ustad permanently because it would "expose" the incapability of the Sajjangarh Biological Park to house a tiger.

"There are violations going on. Without permission, its fate is like that of a convict in a permanent jail, but with the status of custodial detention," Mahrotra told IANS.

He added, "It was never proven that Ustad was a man-eater. To declare an animal man-eater, a consultation is done among the Chief Wildlife Warden and Wildlife Institute of India, which in case of Ustad never happened."

Sharma, terming the man-eater theory "scandalous", added that Ustad was pretty used to people and never attacked pilgrims to a Ganesh temple loacted within his territory.

"But suddenly word was spread that Ustad is a man-eater, which panicked the tourism lobby there, including some so-called conservationists. It was proposed that it should be shifted," Sharma said.

Ranthambore, unlike other national parks, had earlier pushed for a night safari. But the proposal was rebuffed by officials. It is, however, all set to offer a full-day safari, where limited number of vehicles will be permitted inside the park for all day long.