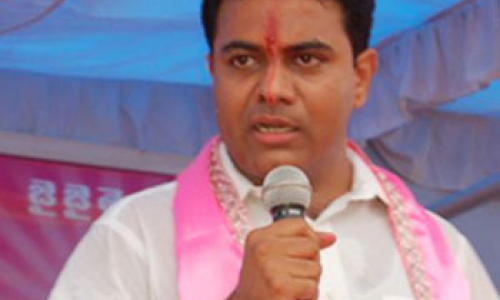 Continuing his rhetoric against Prime Minister Narendra Modi, IT Minister K T Rama Rao said the BJP had no right to seek votes in the civic polls as it remained unmindful of the promises made during the general elections.

Hyderabad: Continuing his rhetoric against Prime Minister Narendra Modi, IT Minister K T Rama Rao said the BJP had no right to seek votes in the civic polls as it remained unmindful of the promises made during the general elections.

Addressing ‘Advocates Shankharavam’ programme at Amberpet here on Tuesday, the Minister lashed out at the BJP-led NDA government for failing to keep its promise of division of the High Court.BJP State unit president G Kishan Reddy should tell what the Centre had done for Telangana State, he asked and accused the BJP of indulging in communal politics and seeking votes.

Stating that Modi was on a foreign tour spree, he alleged that the Prime Minister forgot to bring back black money stashed abroad. The Minister sought to know whether ‘Mann Ki Baat’ was for Modi and not for Telangana. Rama Rao also accused the Modi government of facing defeats and doing injustice to Telangana by denying financial package as was the case with Bihar and Jammu and
Kashmir.

The previous governments had failed to resolve the issues haunting the city that was lacking basic amenities, he said, and added that some deprived class people were sleeping on roadside footpaths. People should not get carried away by the Opposition parties which did nothing during their regimes, he said.

The voters, he said, should teach them a lesson and support the TRS for developing the city with all amenities. Chief Minister K Chandrashekar Rao gave equal respect to all religions and had a master plan to develop the city and could implement it if the people voted the TRS to power in the civic polls, Rama Rao asserted.

Leaders of the TDP and its ally BJP were resorting to street fights that reflected conflict within themselves, he observed.