Gaana Gandharva from the banks of Krishna 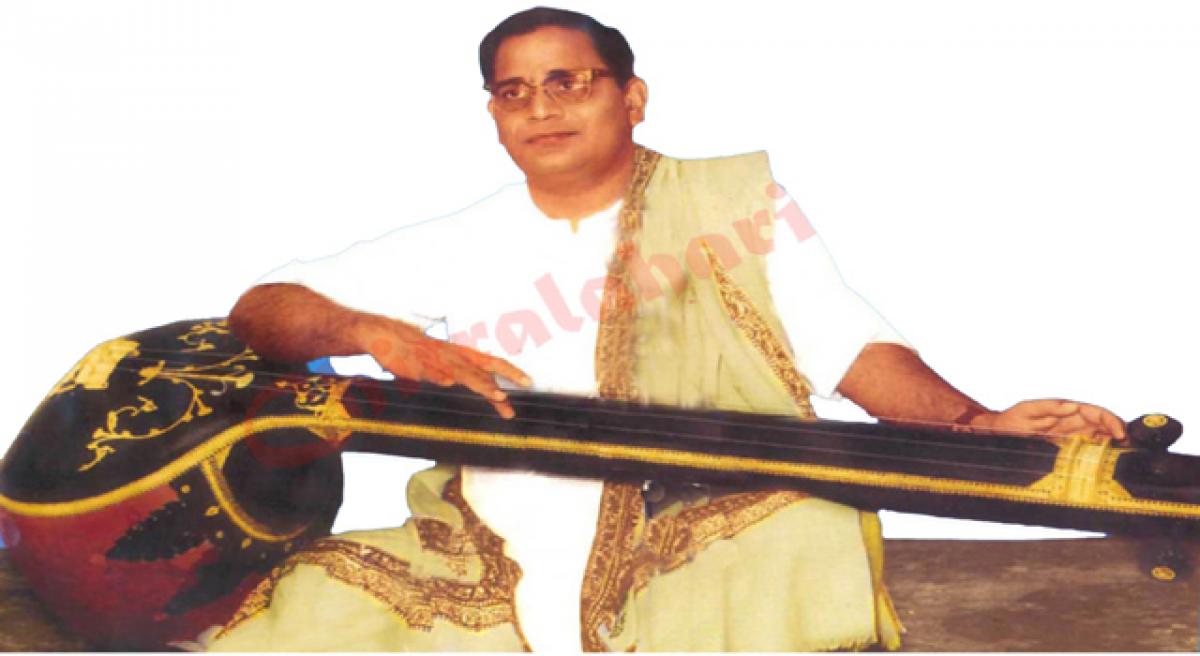 One of the most used words in speech or writing, when referring to Ghantasala\'s voice and music is the word “Ganaamrutham” or nectarine song. It is surely one of the aptest words when discussing the work of this singer-composer, who is regarded as a phenomenally talented artiste, and one of the all-time greats in the playback-singing history of south Indian cinema.

One of the most used words in speech or writing, when referring to Ghantasala's voice and music is the word “Ganaamrutham” or nectarine song. It is surely one of the aptest words when discussing the work of this singer-composer, who is regarded as a phenomenally talented artiste, and one of the all-time greats in the playback-singing history of south Indian cinema.

He still enjoys the iconic status, decades after his demise, and many of his songs are considered incomparable classics. Ghantasala is celebrated for a voice, which was richly melodious with a complete command over rhythm, a rare timbre, and an astonishing ability to give emotional expression to any genre of song. Many critics consider his voice as being as close to divine as it can get in film playback singing!

Ghantasala's full name was Ghantasala Venkateswara Rao. He was born in 1922 in a Telugu family to Ghantasala Suryanarayana Rao aka Soorayya and Rattamma (some hold that it is Rathnamma), in a small village called Chowtapalli in Gudivada taluk of Krishna district in undivided Andhra Pradesh.

His father was a professional singer and encouraged his son, but he died early so Ghantasala was brought up largely by his maternal uncle. He received years of formal training in classical music and his guru was Patrayani Sitarama Sarma and he later joined the famous Maharaja Government College of Music and Dance in Vijayanagaram – a school, which nurtured many great classical artistes. Ghantasala soon became an accomplished Carnatic vocalist.

He had an arranged marriage with Savitri and had children. He was a staunch patriot, who participated in the 1942 Quit India Movement and was subsequently imprisoned for it. It was after being released from jail that he met film lyricist Samudrala Raghavacharya, who got impressed by his voice, suggested he enter the film industry. Thus began his film career.

His songs soon became chartbusters and he enjoyed critical appreciation and mass appeal all his life. Soon after entering film music, he was singing for all the legendary actors in Telugu cinema besides a few heroes in Tamil and Kannada films. He also sang a few numbers in Malayalam, Tulu and Hindi.

From giants NT Rama Rao and Akkineni Nageswara Rao to other top heroes and character actors like SV Ranga Rao, his was their iconic playback voice in songs for solos and duets. He was also accompanying the greatest female singers of his time like P Leela and the other two queens of south cinema playback singing namely, P Suseela and S Janaki. His 'background' songs ie the songs rendered for a scene or series of scenes and not for a person, also became famous. His padyam renditions became the highlights in films based on the epics and Puranas.

The list of all his hit songs is too numerous to enlist here – and they are all enshrined in the hearts of Telugus besides many Kannadigas and Tamilians. A few mentions are films like ‘Pathala Bhairavi’, ‘Maya Bazaar’, ‘Pelli Chesi Choodu’, ‘Pandava Vanavasam’, ‘Nartanasala’, etc. During the 1950s and 1960s, he enjoyed complete suzerainty over the Telugu cinema playback scene. He also won the Best Singer award from the Andhra Pradesh government during its annual film awards, over and over again.

Whether it was a song with a strong classical base like the famous “Sivasankari Sivanandalahari”, a masterpiece in south cinema playback history or romantic duet songs or light-hearted songs for comedians, Ghantasala's songs became instant hits. He also turned film music director and was very successful in this field too. Besides, he gained wide popularity for his private albums and non-film songs. Of this, his ‘Bhagavad Gita’ and ‘Pushpa Vilapam Padyam’ renditions are the most widely celebrated.

Ghantasala performed in Europe and the USA besides at the UN organisation. He received the Padmashree Award from the government, though many feel that he did not receive the much higher recognition like the Padma Vibhushan, which he richly deserved. He was, however, the first cinema singer-composer from south India to have a postal stamp issued in his honour –this happened posthumously, though.

In a rare milestone, he became the first singer-composer since the great Annamacharya to sing before the “garbha gudi” or sanctum-sanctorum of Tirumala's Sri Venkateswara temple. He still remains the only singer after Annamacharya with that honour. He also served as Asthaana Gayaka for the Tirumala Tirupathi Devasthanam.

Ghantasala died a rather premature death in 1974 in Chennai, the city, where he made most of his fame. After this, there have been many awards instituted in his honour like the Ghantasala Puraskar Award just as there are many institutions built and/or named after him, like the Government Music College in Vijayawada and Ghantasala Sangeetha Kalasalas located in Hyderabad and Visakhapatnam.

Also, there are several statues erected in his memory across Andhra Pradesh. There is one in the eponymous village in Krishna district. This village, because it is named Ghantasala is often mistaken for his birthplace. However, on visiting the village, we learnt that only his ancestors hailed from here and he himself had no direct or personal connect with this village.

Nevertheless, this village has built a beautiful statue in his honour. Incidentally, the village Ghantasala has other claims to fame – like a Buddhist stupa, an ASI museum housing centuries-old artefacts, and the Jaladheeswara temple with an interesting history.

Today, decades after his death, Ghantasala's immortal songs live on and his best renditions are considered a benchmark for aspiring singers. He is still considered a peerless playback singer and will live on as a “Gaana Gandharva” in people's hearts.