Reinventing the joy of music 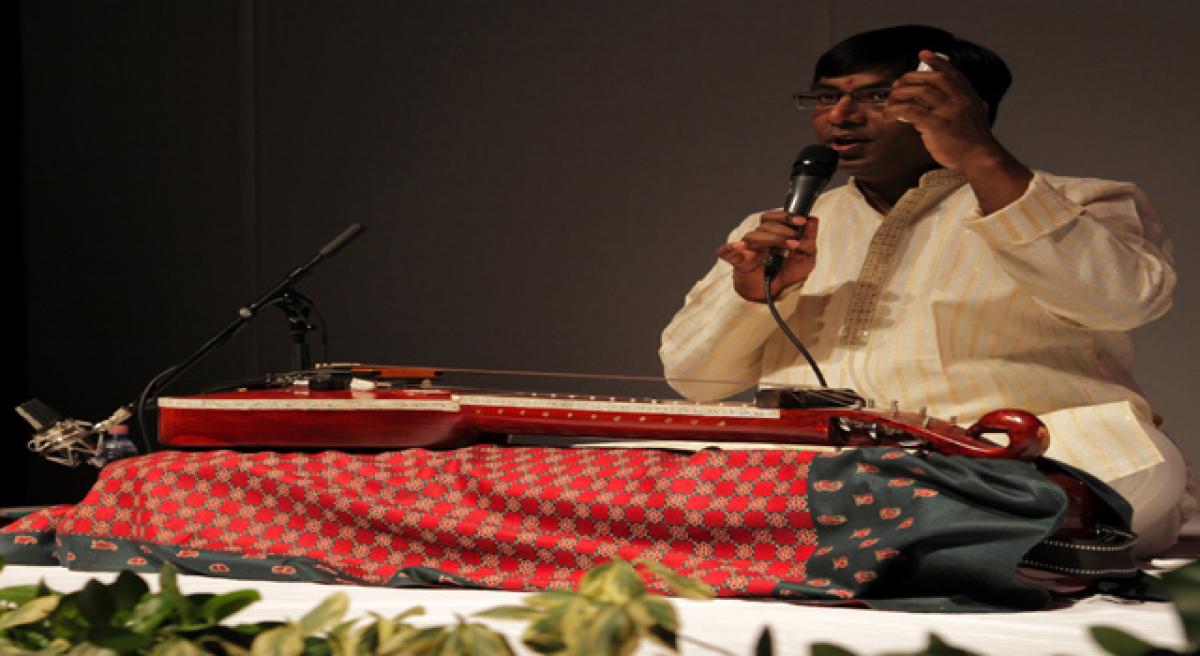 He had a spectacular start to his career. Musician Chitravina N Ravikiran was presented on stage at the age of two – yes; he was just two years old then! This was in 1969. Even more amazing, soon after that he was quizzed by legends of the day and he was able to identify 325 ragams and 175 thalams, at that tender age. The music world was stunned!

He had a spectacular start to his career. Musician Chitravina N Ravikiran was presented on stage at the age of two – yes; he was just two years old then! This was in 1969. Even more amazing, soon after that he was quizzed by legends of the day and he was able to identify 325 ragams and 175 thalams, at that tender age. The music world was stunned!

And till today, the Chennai-based Ravikiran is wowing audiences around India and the world with his prodigious music talent and ingenious innovations. As an instrumentalist, vocalist, teacher, composer, orator and author, he has proved to be among the most versatile musicians of today. He also boasts impeccable pedigree.

He is the son and disciple of famous Carnatic musician Chitravina Narasimhan, and grandson of the renowned gotuvadyam player, Narayana Iyengar. Incidentally, his brother N Shashikiran and sister Kiranavali Vidyasankar are also well-known Carnatic musicians and teachers.

He began as a vocalist giving his first performance again at the astonishingly young age of five in Coimbatore. He later performed across several cities. However, at the age of 10, he switched over to the chitravina and debuted as a chitravina performer when he was just 11 years old.

Ravikiran's chitravina performances soon began featuring at prestigious venues in India and around the world including USA, Europe, Asia and Australia. His chitravina playing was widely acclaimed for its creativity, melody, precision and dazzling effects. Among the earliest milestones in his chitravina performances was the one in 1985, when he gave a 24-hour non-stop solo concert in Chennai and set a record. He has also patented the “navachitravina”, which has a slightly different design.

Interestingly, he did not give up singing and went on to train under T Brinda, the iconic vocalist, for 10 long years. His vocal performing career also continued with a high degree of success and after he resumed vocal performances, he was featured as a Carnatic vocalist in top festivals and at prestigious concert venues around the world.

Ravikiran is acknowledged as a musical genius and there are other reasons for that. As a composer, he has 700 classical compositions to his credit in various forms like kriti, varnam, javali, tillana and padam. He has also invented new ragams like Choodamani, Mohini, Keshavapriya, Snehapriya, Andhakarini.

He also has the distinction of having created pieces in each of the 35-talas (seven basic thalams multiplied by the five metres). He is also credited with a unique 72-mela ragamalika geetam, a 13-part piece, which as the name reveals covers all the 72 fundamental or janaka ragams of Carnatic music. He not only tuned all 1,330 couplets of the Tamil classic Tirukkural but did so in a record time in a public performance.

His competence as a polyglot stands him well – his compositions use Sanskrit, Telugu, Kannada, Tamil and Hindi. And he is also highly articulate in English and is frequently invited to give expert lectures and Lec-Dems (lecture demonstrations) around the world. Ravikiran has several albums to his credit – ‘Diskhitar Masterpieces’, ‘Gotuvadyam’, ‘Karunyam’, ‘The Eighteen Steps’, etc.

He has not only performed solo but also teamed up with other famous Indian and foreign musicians in widely appreciated performances. Online music learning is all the rage now in Carnatic and Hindustani streams of classical music. In fact, it is now being employed in Indian classical dance too. Ravikiran was the pioneer in this regard and started online music classes or distance music education in India, decades ago.

A path breaking initiative of his has been the Melharmony, a new approach to aesthetics and composition, which has received appreciation from musicians and musicologists including in the Western music world. Ravikiran is also credited with operatic dance creations and these include ‘Vinayaka Vaibhavam’, ‘Lakshmi Prabhavam’, ‘Savithri’, ‘Ramayanam’ (‘Bala Kandam’ and ‘Yuddha Kandam’) and ‘Mahabharatam’ (‘Karna Shapatam’) and ‘Panchakriya’. For a dance drama titled ‘In the Long White Moonlight,’ in San Francisco, he tuned verses from the ‘Agananooru’ and ‘Purananooru’.

Among his exciting new programmes is ‘The Almighty Trinity’, an operatic dance production, an all-Telugu work, in collaboration with classical dancer Smita Madhav that will premiere in Hyderabad. It will later be staged across cities in the USA. Explaining the concept, he said, “‘The Almighty Trinity’ is a beautiful, compelling, colourful, powerful operatic dance production of mine in entirely original composition-based Telugu.

I composed the music and lyrics for this originally in collaboration with Kuchipudi guru Vempati China Satyamgaru in a production, which we were originally supposed to present around 2001 or 2002 across the USA." However, it did not materialise due to the guru's declining health and other reasons. After slight modifications which Ravikiran effected subsequently in this creation, it is now finally being staged.

Giving more details, he says the production highlights the harmonious interaction between Brahma, Vishnu and Shiva, who constitute the almighty Trinity. "There were originally four or five stories that Vempatigaru and I decided upon. However, now it will have two – the popular Mohini Bhasmasura story and the second will be a never-staged-before one titled Sangeeta Devatha Mochanam, where the Trinity, especially Lord Shiva rescues the Muses or goddesses of music from bad or carelessly performed music! We have covered around 32 ragams in this production."

He is also embarking on yet another first-of-its-kind programme, the Indian Music Spelling Bee Competition, which will be premiered in the USA. The spelling out of musical phrases, which is a highly essential skill in Indian classical music, will be the focus. He has also prepared an instructional video for preparing for this competition.