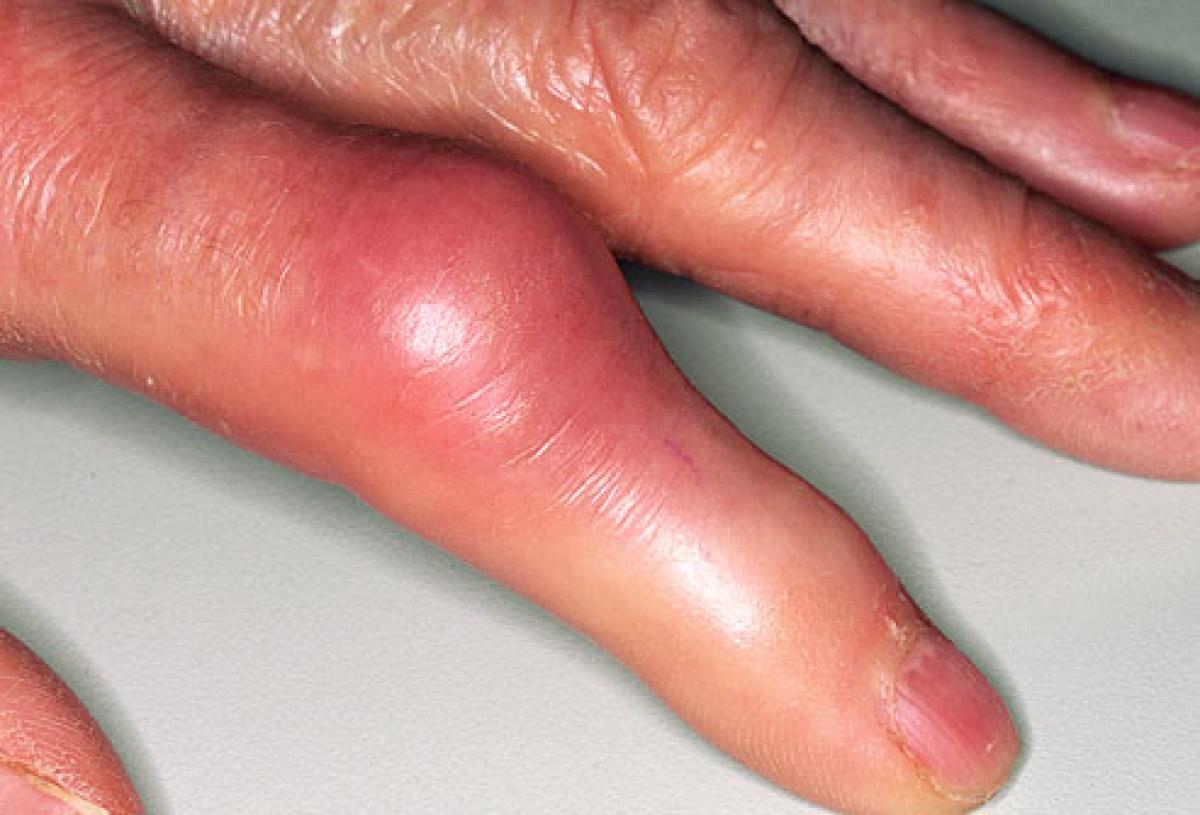 Gout is today the most common inflammatory arthritis in men and older women. This excruciatingly painful condition is caused by the crystallization of uric acid within joints.

Gout is today the most common inflammatory arthritis in men and older women. This excruciatingly painful condition is caused by the crystallization of uric acid within joints.

Not many people know that purine intake of animal origin increases the odds for recurrent gout attacks by nearly five-fold. Another major cause is heavy alcohol consumption. So, strictly stay off organ and other meats, fish, seafood, sugar and alcohol (particularly beer, which contains purines). People are scared of purines of vegetarian origin also but the risk from them is almost negligible.

One item which most people don't associate with gout is tea. Tea addicts pass three times more urine than a healthy person. Yet, the toxic substances in it do not go out and instead form uric acid that causes gout and arthritis. So dispense with your daily cuppas.

The standard medicines include Prednisone, Cortisone and anti-inflammatory drugs. Initially these help but cause serious side-effects if continued for long.

Fortunately, this debilitating condition can also be tackled with the help of certain food items. The most useful is cherry. Eating just 45 cherries per day for a month brings about a dramatic reduction in this chronic inflammatory disease. Not only that, residual anti-inflammatory benefits can be felt even a month after one stops this cherry treatment.

According to research at East Lansing's Michigan State University, anthocyanins, the compounds that give cherries their brilliant red colour, are anti inflammatory 10 times stronger than ibuprofen and aspirin.

If cherries are not in season, you can go for the frozen ones. Even cherry juice concentrate helps control the pain, but is no patch on the actual fruit. Cherries bring down uric acid levels as well. Significant drop can be noticed within five hours of eating a big bowl of cherries. Not only that, antioxidant levels in the blood go up as vitamin C levels start to rise.

Several other fruit like grapes, strawberries and kiwi fruit have been tested but none of these significantly lower uric acid levels. The cherries can come in handy for those who cannot afford prohibitively costly gout drugs. Not only that, uric-acid lowering drugs like allopurinol have rare but serious side-effects which include the worst of them all called Stevens-Johnson syndrome in which one's skin gets detached from the body.

Our lowly 'dhania' (coriander leaves) too is a saviour for gout patients. Properly clean a bunch and boil it in a glass of water for 5-6 minutes. Drink this concoction for a month to see the difference. This is also good for kidney patients.

Those who don't like the taste of dhania can instead blend cucumber, celery and ginger and drink it twice a day with a dash of lemon. Even those on a medicine can try these complementary therapies. Another surefire remedy is to take two to three tablespoons of apple cider vinegar with half a teaspoon of aluminium-free baking soda thrice a day, about half an hour before every meal.

(The author is a health specialist and author of "Perfect Health in Twenty Weeks" and "Stress to Serenity". He can be reached on amarchandel@yahoo.com. The views expressed are personal.)