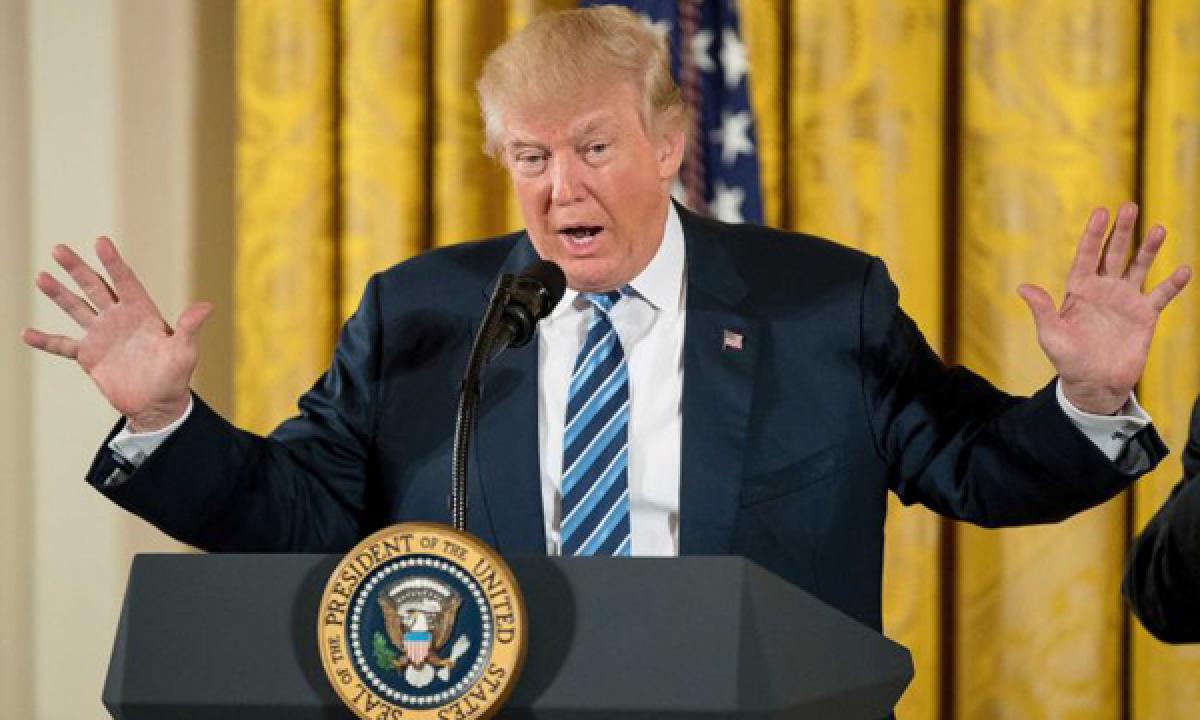 US President Donald Trump on Sunday ramped up his criticism of a federal judge who blocked a travel ban on seven mainly Muslim nations and said courts were making US border security harder, intensifying the first major legal battle of his presidency. In a series of tweets that broadened his attack on the country\'s judiciary, Trump said Americans should blame U.S. District Judge James Robart

Washington:US President Donald Trump on Sunday ramped up his criticism of a federal judge who blocked a travel ban on seven mainly Muslim nations and said courts were making US border security harder, intensifying the first major legal battle of his presidency.

In a series of tweets that broadened his attack on the country's judiciary, Trump said Americans should blame U.S. District Judge James Robart and the court system if anything happened.

Trump did not elaborate on what threats the country potentially faced. He added that he had told the Department of Homeland Security to "check people coming into our country VERY CAREFULLY. The courts are making the job very difficult!"

The Republican president labeled Robart a "so-called judge" on Saturday, a day after the Seattle jurist issued a temporary restraining order that prevented enforcement of a 90-day ban on citizens from Iran, Iraq, Libya, Somalia, Sudan, Syria and Yemen and a 120-day bar on all refugees.

A U.S. appeals court later on Saturday denied the government's request for an immediate stay of the ruling.

Vice President Mike Pence defended Trump earlier on Sunday, even as some Republicans encouraged the businessman-turned-politician to tone down his broadsides against the judicial branch of government.

"The president of the United States has every right to criticize the other two branches of government," Pence said on NBC's "Meet the Press" program.

It is unusual for a sitting president to attack a member of the judiciary, which the U.S. Constitution designates as a check on the power of the executive branch and Congress.

Some Republicans also expressed discomfort with the situation. "I think it is best not to single out judges for criticism," Senate Majority Leader Mitch McConnell said on CNN's "State of the Union" program. "We all get disappointed from time to time at the outcome in courts on things that we care about. But I think it is best to avoid criticizing judges individually."

Republican Senator Ben Sasse, a vocal critic of Trump, was less restrained. "We don't have so-called judges ... we don't have so-called presidents, we have people from three different branches of government who take an oath to uphold and defend the Constitution," he said on the ABC News program "This Week."

The ruling by Robart, appointed by former Republican President George W. Bush, coupled with the decision by the 9th U.S. Circuit Court of Appeals in San Francisco to deny the government's request for an immediate stay of the ruling dealt a blow to Trump barely two weeks into his presidency.

It could also be the precursor to months of legal challenges to his push to clamp down on immigration, including through the construction of a wall on the U.S.-Mexican border, and complicate the confirmation battle of his U.S. Supreme Court nominee Neil Gorsuch.

The Senate's top Democrat, Chuck Schumer, said on Saturday that Gorsuch, a conservative federal appeals court judge from Colorado, must meet a higher bar to show his independence from the president.

Trump, who during his presidential campaign called for a temporary ban on Muslims entering the United States, has vowed to reinstate his controversial travel ban. He says the measures are needed to protect the United States from Islamist militants. Critics say they are unjustified and discriminatory.

The legal limbo will prevail at least until the federal appeals court rules on the government's application for an emergency stay of Robart's ruling. The court was awaiting further submissions from the states of Washington and Minnesota on Sunday, and from the federal government on Monday. The final filing was due at 5 p.m. PST on Monday.

The uncertainty has created what may be a short-lived opportunity for travellers from the seven affected countries as well as refugees to get into the United States.

Sara Yarjani, an Iranian student with a U.S. visa who was attempting to return to Los Angeles to visit her parents, was among those who boarded flights to the United States after learning that Trump's travel ban had been blocked.

Her visa had been stamped "revoked" and she was sent back to Vienna last week. She was slated to arrive in Los Angeles on Sunday, according to her sister, Sahara Muranovic.

"This is our only window," Muranovic said. "Maybe they'll blow it again by Monday."

Trump's Jan. 27 travel restrictions have drawn protests in the United States, provoked criticism from U.S. allies and created chaos for thousands of people who have, in some cases, spent years seeking asylum.

Reacting to the latest court ruling, Iraqi government spokesman Saad al-Hadithi said: "It is a move in the right direction to solve the problems that it caused."

In his ruling on Friday, Robart questioned the use of the Sept. 11, 2001 attacks on the United States as a justification for the ban, saying no attacks had been carried out on U.S. soil by individuals from the seven affected countries since then.

For Trump's order to be constitutional, Robart said, it had to be "based in fact, as opposed to fiction".

The 9/11 attacks were carried out by hijackers from Saudi Arabia, the United Arab Emirates, Egypt and Lebanon, whose nationals were not affected by the order.

In a series of tweets on Saturday, Trump attacked Hobart's opinion as ridiculous. "What is our country coming to when a judge can halt a Homeland Security travel ban and anyone, even with bad intentions, can come into U.S.?" he asked.

Trump told reporters at his private Mar-a-Lago resort in Florida late on Saturday: "We'll win. For the safety of the country we'll win."

The Justice Department's appeal criticized Robart's reasoning, saying the ruling violated the separation of powers and stepped on the president's authority as commander-in-chief. It said the state of Washington lacked standing to challenge Trump's order and denied it "favors Christians at the expense of Muslims."The U.S. State Department and Department of Homeland Security said they were complying with Robart's ruling and many visitors were expected to start arriving on Sunday, while the government said it expected to begin admitting refugees again onMonday.

A spokesman for the International Organization for Migration, Leonard Doyle, confirmed on Sunday that about 2,000 refugees were ready to travel to the United States. "We expect a small number of refugees to arrive in the U.S. on Monday, Feb. 6th. They are mainly from Jordan and include people fleeing war and persecution in Syria," he said in an email.

Iraqi Fuad Sharef, his wife and three children spent two years obtaining U.S. visas. They had packed up to move to America last week, but were turned back to Iraq after a failed attempt to board a U.S.-bound flight from Cairo.

On Sunday, the family checked in for a Turkish Airlines flight to New York from Istanbul.

"Yeah, we are very excited. We are very happy," Sharef told Reuters TV. "Finally, we have been cleared. We are allowed to enter the United States."